The Most Important Free Albums Of 2012 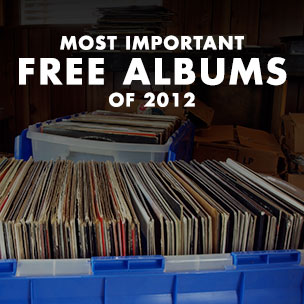 Over the last few years, Hip Hop artists and their labels have used the free album as an outlet for more creative freedom, litmus test fan interest, and as a free introduction for listeners to develop an understanding of new artists. That new tradition continued in 2012, with established artists and neophytes both using the medium to fight their way into fan consciousness. This year’s collection of top free albums is a good mix: newfound veteran Curren$y teams with a new producer to sharpen his usual formula, and Action Bronson bounces back from a solid rookie year with a pair of the year’s top records that laugh at the idea of a sophomore slump and establish himself as a character who belongs in Rap’s colorful cast.The list also includes two of Rap’s more memorable newcomers from 2012. Nomadic femcee Angel Haze establishes herself as one of the genre’s most distinctive new voices, with an album that is raw in every sense of the word. Flatbush Zombies’ debut fills the decreasing presence of Odd Future and Lil B, incorporating OFWGKTA’s black goth and Based God’s silliness into their own brand of youthful revolt.

Considering Curren$y’s prolific output, a five-track release appears as a meager offering from the Jet Life head honcho. Thankfully, Cigarette Boats is more of the Spitta that his fans have become accustomed to: slinky, smoke-ready rhymes with subdued production. After his major label debut The Stoned Immaculate strayed from his one-producer formula previously honed with Alchemist and Ski Beatz, he returns to his formula with Harry Fraud, known for his frequent collaborations with French Montana and Smoke DZA. The Brooklyn beatmaker’s assortment of slow-cooking soul samples makes an apt seat-reclining, window-rolling soundtrack for Curren$y first-class flows. The duo doesn’t reinvent the wheel here, and the EP clocks in at less than 15 minutes, but there’s something to be said for consistency and quality control, and Curren$y on cruise control isn’t a bad thing.

After impressing fans earlier in 2012 with Blue Chips, Action Bronson returned in November with Rare Chandeliers: possibly the most engaging 40 minutes of Hip Hop this year. Armed with a fully-loaded arsenal of Alchemist instrumentals, Bronson narrates full-bellied tales of travel, dimes, food and catching bodies. Cameos by ScHoolboy Q, Roc Marciano and Evidence deliver, but they’re only co-stars in the audio blaxploitation film that serves as a vehicle for Bronson’s show-stealing punchlines, colorful imagery and anti-hero presentation. Alchemist continues to keep his name in G.O.A.T. producer conversations with sound beds just as eccentric as the character rhyming over them. Songs such as “Randy The Musical” and “Eggs On The Third Floor” effortlessly slither from slyly sinister to fun and carefree between verses. Together, the duo adds a whimsical edge to the hardnosed East Coast Hip Hop that the genre has been missing, and listeners enjoyed them for it.

After a year that included two great albums (Dr. Lecter and Well Done) and a flood of Ghostface Killah comparisons, Action Bronson emerged in 2012 with Blue Chips: a project that solidified him as one of the most entertaining new personalities in rap. Fools Gold producer Party Supplies laces a varied platter of grit and soul, while Bronson splices stories of inner-city prostitution (“Hookers At The Point”) and deteriorating romance (“Thug Love Story 2012”) between kaleidoscopic references to gourmet food, professional wrestling and orally generous women. The Pretty Toney comparisons will likely stay put, but Action Bronson isn’t going anywhere, either—and that’s all that matters.

With her breakthrough record Reservation, Universal Republic emcee Angel Haze uses punchline-driven showcases as a gateway drug to lure listeners into an unfiltered diary of her personal life. And unlike many, she can tread both waters equally well. Viral songs such as “New York” and “Werkin’ Girls” are chockfull of acrobatic flows, an authoritative mic presence and impressive one-liners, easing the usual “hang with the guys” worries that plague other female rappers. The album unravels to reveal nuanced vulnerability: the resilience built from homelessness, moving from state to state, and being raised by a mother who she says was manipulated by religion. Detailed songs about romance—both the hopefulness of new love, and the wistfulness of love left behind—round out the album. On “Realness,” she claims, “I’m not the next anybody; I’m the first Angel Haze,” and Reservation shows exactly who that person is.

Anyone who didn’t know about Flatbush Zombies before their appearance on A$AP Mob’s single “Bath Salts” was more acquainted after their debut album. D.R.U.G.S.—an acronym for Death And Reincarnation Under God’s Supervision—sees the Brooklyn outfit using self-produced gothic sound beds to back rock star rhymes about pussy, fighting, money and, obviously, drug use. “S.C.O.S.A.” develops that cryptic bounce to a tee, and their breakout hit “Thug Waffle” pairs a more digestible version of that sound with shrieking vocals. The frenzy continues on the demented “Face-Off (L.S.Darko),” which uses splices from news reports to split verses of rebellious bars. With an outcast aura and self-contained work, Flatbush Zombies has the ingredients to be around for a while.

RELATED: The Most Important Mixtapes Of 2012