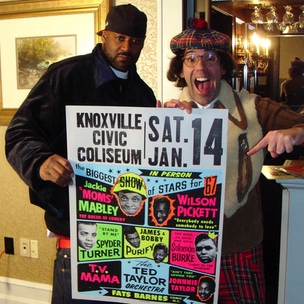 Long before video could go viral, antiques went on roadshows and LPs were bought for the purpose of hanging on dorm room walls, Vancouver radio host and TV personality, Nardwuar “The Human Serviette” was out pleasantly accosting your favorite musician to take part in something that was probably unlike any interview they’d ever experienced. Closer to a highly caffeinated guerilla-style episode of This Your Life where old vinyl and local restaurants replace first grade teachers and junior prom dates, Nardwuar’s meticulously-researched questions and “gifts” give artists the chance to roll with the surprises and show that they’re no different than their own fans when it comes to freaking out over the music, toys and pop culture memorabilia from their youth.

Now, not everyone “gets it.” There are times when an interviewee’s air of self-importance and aversion to throwing away the script creates a brutally uncomfortable exchange that plays out like one of those old Stuttering John red carpet bits on The Howard Stern Show. But the big difference is that even when facing off against a less-than-willing participant, Nardwuar isn’t doing a character and his questions aren’t shitck. The guy not only knows – and loves – music, he wants to know the stories behind the music other people love.

So with cojones of steel Nardwuar has spent the last 25 years jumping at the chance to go head-to-head with artists from any genre, independents to A-listers. But what may surprise some is that The Human Serviette’s kindest reception has come from the Hip Hop community. Hip Hop is often maligned for being made up of tough-talking artists who take themselves too seriously. Yet Nardwuar’s Hip Hop interviews tell a much different story. From vets like Snoop Dogg and Too Short to breakout artists like Big K.R.I.T., Kendrick Lamar and Danny Brown, Nardwuar’s Hip Hop interviewees have shown themselves to be ego-free, quick on the uptake and full of admiration for the preparation, research and of course, crate digging that was required for the segment. But most importantly, from the moment the microphone gets shoved towards a face with the opening question of “Who are You” to the awkward frozen pose ending, Hip Hop has shown it has a sense of humor.

Since so much importance is placed on the artist and their tastes, favorite Nardwuar interviews are a subjective thing. With his recent partnership with Pharrell’s “i am OTHER” venture and hot off a Curren$y Q&A, we decided to pay tribute. Rather than a “Best-Of” list, the following are some memorable moments – hits and misses – that will help newcomers kick off an afternoon of clicking YouTube links and repeatedly saying, “just one more.”

With five interviews that span the course of a decade, Snoop Dogg and the man he has dubbed his “nephew from Vancouver, Mr. Nard Stay Hard Wuar” can deservedly be called the YouTube generation’s “Ali and Cosell.” When making offers to buy Nardwuar’s signature interview gifts like a stuffed Red Foxx doll proved futile, Snoop resorted to what he has alternately called “borrowing” and “taking candy from a baby.” But watching the duo bond over microwaved blunts and their love of Blowfly albums, you can’t help but be moved by the sincere admiration they seem to have for each other. Snoop has said most interviewers don’t come close to possessing Nardwuar’s personality and courageousness. Nardwuar has in turn responded with items like Snoop’s directorial debut, the straight-to-VHS, Smokefest #1 which Tha Doggfather himself couldn’t find anywhere aside from a guy on eBay who tried to rip him off by jacking up the tape’s price. Here’s to another 10 years…

When N.E.R.D. sat down with “The Human Serviette” a.k.a. “The Human Napkin” in 2008 they were most likely expecting more questions like “Uh, so when’s your next project due out?” not Virginia mall and skate-park talk or vinyl copies of Pharrell’s first production credit, Wreckx-N-Effect’s “Rumpshaker.” What Pharrell calls “one of the most impressive interviews I’ve ever experienced in my life,” N.E.R.D.’s sit down with Nardwuar taught us that everything boils down to Carl Sagan’s Music of The Cosmos and Mork and Mindy’s “Nanu Nanu.” A fan favorite, this interview has all the elements of a classic Nardwuar encounter; impeccable research, forgotten toys, obscure records and wide eyed artists.

So blown away by this Canuck who calls himself “The Human Serviette,” Pharrell Williams personally hooked up (as in repeatedly emailed, called, and texted) an interview with Jay-Z who was at the top of Nardwuar’s wishlist. When it finally happened, Nardwuar’s few minutes with Jay wasn’t a bust of epic proportions (see: Travis Barker, Henry Rollins) but rather seemed to fizzle before it started with Hov losing interest after finding out his name was all that was necessary in response to the signature opener “Who are you?” rather than a monlogue on his ascent to greatness. The revelations that crept out between cigar puffs were minor: Jaz-O wore all of Jay’s jewelry, Canadian customs sucks and people need to practice things.

With artists who have as rabid a fanbase as Tech N9ne, routine interviews done during tour-stops tend to convert the unititiated rather than satisfy the cult. But a Nardwuar interview in “Vancouver, British Columbia,” is an entirely different beast where ephemera and anecdotes that even the artist has forgotten are unearthed. If Jay-Z’s 10 minutes were all over the place with little accomplished, Tech N9ne who joined Pharrell in declaring “greatest interview ever” had an exchange with Nardwuar that mirrored the Kansas City emcee’s rhymes: head spinning efficiency topped with a twisted smile. You get the story of Tech choosing to open up for EPMD rather than attend his high school graduation followed by a discussion of James Lemonade, Mac Dre and a lawsuit from Bill Withers over sampling rights. Then there’s a surprise video message from the original “Dirty Rapper” Blowfly and a K.C. Hip Hop history lesson featuring Tech’s first group, Pure Dope. As if this wasn’t enough Krizz Kaliko joins Nardwuar and Tecca Nina to talk The Munsters and participate in the longest recorded “ending freeze.” Game, set, match, Strange.

Sure, The Human Serviette’s time chopping it up with Nas featured the usual impressive six-degrees-of-separation via toys and vinyl records but the interview deserves special mention for the cringe-inducing turn for the worse it took right near the end. Sitting there with his hands full of souvenirs that included a Pete Rock Comb, an Iron Shiek figurine and records from J.J. Fad, Main Source and MC Shan, Nasty Nas was under the impression everything was his to keep. When Narduwar broke the news that these were interview gifts, the Queensbridge legend went from “tripped out” to pissed off. What seconds earlier were heart touching items that stoked the flames of nostalgia now became nothing more than stuff from the “trick bag.” After that nothing went right. The microphone was now too close and the Jimmy “J.J.” Walker record with it’s tie to the Jay-Z diss “Ether” could be seen as a sign of disrespect. Then came the coup de grace…the “doot-doola-doot-doo” didn’t even get a “doot-doo.”

Ghostface is the rare artist that gives people a hundred more reasons to love him just by stepping in front of a rolling camera. So when Starks crosses the border and chooses to do a Nardwuar interview over eating Tiramisu backstage, you know you’re in for a treat. Once the confusion – “Apollo Kids”  the 2010 album or the 1999 track – was out of the way it was nothing but Ghettofaboulous gems from Ton’ Atlas. But where the aforementioned artists along with everyone else Narduwar has ever interviewed were either awestruck, confused or creeped out by this guy dressed in plaid flinging gifts and esoteric questions at them, Ghostface doesn’t find any of this the slightest bit odd. Even a question like “how do I know you’re the real Ghostface” receives sincere consideration and a measured response. Watching how at ease Ghost is shifting gears from Chubb Rock’s rhyming skills to how his comments about Ramen have been taken too far is a miraculous thing. But don’t count on a Ghostface / Chunky A collaboration any time soon. There he was just being nice.

Nardwuar vs. The Roots

Nardwuar finally met his match in Roots drummer, historian and vinyl junkie ?uestlove. For a music geek watching the pair go back and forth for nearly an hour must have been what it was like to see Miles Davis on stage riffing with Charlie Parker. The roles of interviewer and interviewee disappear over the course of four YouTube videos crammed with names, dates, and dusty out-of-print LPs. Check out the first ten minutes and you’ll find out about the Black Eyed Peas as “gangstas,” why sampling Sly and The Family Stone is more expensive than sampling Michael Jackson, how a last minute phonecall from Thom Yorke saved a Roots track and the definition of “celebrity” versus “respect” in relation to ?uestlove’s Doo-Wop musician father and Nicole Ritchie’s crotch shots. Or take a seat, grab a notebook and stay for the full hour.

This 2012 SXSW meeting with Ohio emcee and Casualties-fan Machine Gun Kelly is important to show how Nardwuar is no longer a regional oddity but among other things a tastemaker, a titan of the World Wide Web and a journalist whose interview choices are now an indicator of which artists are gaining traction in their respective genres. Along with Curren$y, MGK is one of the few rappers that was familiar enough with Nardwuar to come prepared with his own gifts to lay at the feet of The Human Serviette. Since Nardwuar himself is a musician, playing keyboards and singing for Canadian Punk outfit The Evaporators, MGK turned the tables and presented him with a homemade T-Shirt – and rendition of “I Don’t Need My Friends…” – to pay tribute to the man and his band. As evidenced by the YouTube comments, what this interview also shows is that a one-on-one with Nardwuar works as a humanizer that helps an up-and-comer win over some of the haters.

Thanks Nardwuar. Keep on rockin’ in the free world and…

Michael Sheehan is HipHopDX’s Production Assistant. He is a New Jersey native and has been engineering and writing about Hip Hop for several years.