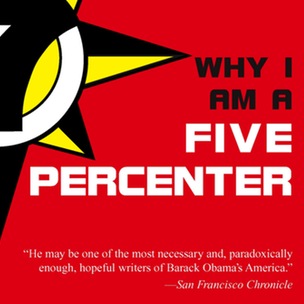 Book Review: "Why I Am a Five Percenter" by Michael Muhammad Knight

At times reading like a textbook, at other times a Hip Hop tale – and yet written in first person, as a memoir – Michael Muhammad Knight’s book Why I Am a Five Percenter (Tarcher/Penguin) takes the reader on a journey through the world of Five Percenters, a branch off of the Nation of Islam tree, which itself is of course a branch of Islam. Many Hip Hop legends who emerged in the 1990s were influenced by the Five Percenters theology and terminology (referring to each other as “God” or calling women “Earths,” for example.) Yet, Five Percenters kept their profile pretty low. As Knight explains in this book, it was a cliquish type of group.

Knight, a white man, casts himself as both a scholar of Five Percenters and as a participant in the culture. He avoids being preachy through strong prose that, much like President Barack Obama’s memoir Dreams From My Father, is an exercise in finding one’s place in the world. Knight’s anecdotes about interactions with RZA, for instance, are just as compelling as his self-effacing comparisons of himself to John Walker Lindh, a/k/a “The American Taliban.” Some of this stuff is eyebrow-raising, to say the least, and some readers could even think Knight is batshit crazy for writing the stuff he’s writing. With that said, it should be noted that reading Knight’s book requires a certain level of open-mindedness and interest in understanding a subculture, to begin with. In other words, Why I Am a Five Percenter is an anthropological excursion – it is not the latest tell-all from a basketball wife.

As far as hip-hop fans are concerned, Why I Am a Five Percenter is important because Five Percenter ideology inspired Jay-Z, Nas, Rakim, the Wu-Tang Clan and many other prominent artists. The words and concepts embedded in the lyrics are recited by millions of fans all over the world – most of whom can only guess at their origins. Knight connects the dots extremely well. Even the historical passages of his book are rather interesting – again, for readers who enjoy reading history and not Anne Rice novels. Knight explores how the Five Percent movement began with founder Clarence 13X – who was at one point imprisoned and placed on the FBI’s Security Index, and assassinated in 1969 – and became a referenced theology in rapper’s lyrics.

At times, the reader won’t be able to help it but to think, “why is this relevant?” Truth is, it’s really not. Five Percenters are a marginalized subculture, and no matter how influential their theology was – or is – for rappers, it didn’t serve any purpose other than make certain artists with a certain street background appear more grounded in religion (which was a joke to other rappers, for instance, think about that time Jim Jones wanted to smack Nas’ kufi off). This helped them appeal to the college-educated, suburban white kids – who, of course, were their primarily customer base throughout the ’90s. Not to say that that’s all bad – the trivial knowledge is useful when you run out of stuff to talk about at a social gathering.

Purchase Why I Am A Five Percenter by Michael Muhammad Knight