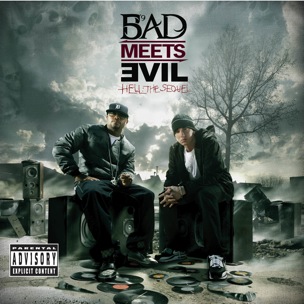 It Takes Two: A History On The Excitement Of Hip Hop Collaboration Albums

In a game fueled by ego, beef and shit-talk, it is always a bit surprising when two emcees, good friends or not, decide to make an album together; most rappers don’t like sharing the spotlight or their paycheck. 2011 has seen a lot of artists putting aside these issues in name of piquing fans interest and making quality music.

Two rappers uniting to make an album has been a relatively rare thing in the past, yet in 2011 we’ve already seen albums from Keith Murray and Canibus, KRS-One and Bumpy Knuckles, Eminem and Royce Da 5’9, and most recently, Jay-Z and Kanye West. The last two are obviously the most remarkable considering the labels and budgets involved. Interscope/Shady, Def Jam/Roc-A-Fella, etc just aren’t going to let their respective cash cows throw an album out there without the machine working behind it. It wouldn’t have been the first time a label preventing a collaboration from happening, or at least delaying it. Still waiting on that Ghostface and DOOM album aren’t we?

Some collaborations are just meant to be. The first time you hear two emcees on a track together and they just click so perfectly, it becomes a countdown until they release an entire album together. That was certainly the case in 1995 when I first heard Method Man and Redman together on “How High.” Sixteen years later the two are synonymous with one another, but when that single dropped they were just two blunted rappers who shared a label and a “Month of the Man” advertising campaign. The two kept the collaborations coming on their respective solo albums, but it took four years before they could connect and give people what they’d been salivating for. Blackout! never reached the heights of “How High,” mostly because the producers brought their B-games, but Red and Meth still sounded like they were born to rap alongside each other.

(A side note about Blackout!, track 9 is a skit called “Where We At” where Redman welcomes listeners to side 2. This might just be the last time an album was constructed with cassette format in mind, or referred to.)

The same can be said for Eminem and Royce Da 5’9; the Detroit emcees were magic together. Em has never sounded as good with D12, 50 Cent, Dr. Dre or any of his frequent collaborators. The same can be said of Royce and his partners-in-rhyme over the years. His Slaughterhouse crew is phenomenal, but he doesn’t have quite the same chemistry with any of them as he does with his pale faced buddy. Their recent project, Hell: The Sequel got some mixed reviews, but there is no denying how great they sound together. Stick those two in a room together with no beats and they could rhyme for days, or at least that is the impression I get when I hear them on wax together. It is truly a case of emcees bringing the best out of each other.

Shelved Collaboration Albums Coming Out Of The Woodwork

It is unfortunate that label politics have put the brakes on the Ghostface and DOOM project, they’re another example of rappers who click perfectly. Long before they appeared together on DangerDOOM’s “The Mask,” fans had been fantasizing about a collaboration. They seemed like a natural fit; a shared love of comics and outrageous non sequiturs. And the mask thing of course. When the collaboration came to fruition it was everything us Hip Hop nerds had imagined and more. Thankfully, the word is the project is back on track and now being called DOOMSTARKS (rather than Swift & Interchangable).

Not all collabs are born out of these circumstances, some of them seem to come out of nowhere. Take KRS-One and Buckshot for instance. When they released Survival Skills  together in 2009 they had appeared on exactly one song together before that. The song in question wasn’t exactly an intimate affair either, it was ‘98 posse cut “5 Boroughs” that featured seven other emcees (Cam’ron, Keith Murray, Killah Priest, Prodigy, Run, Redman and Vigilante for those wondering). It may only seem strange to unsuspecting fans though, some artists are long time friends who rarely have schedules that allow them to get in the booth together. KRS and Bumpy Knuckles hadn’t done a song together in 19 years when they came together to release Royalty Check this year.

When a good friendship is the basis of an album together, it is usually shines through pretty clearly. Perhaps none more evident than a Slug and Murs‘ Felt albums, you can hear how much they feed off one another. Celph Titled’s projects with Apathy (No Place Like Chrome) and J-Zone (Bo$$ Hog Barbarians ) are other fine examples. On paper, I didn’t really care about Canibus and Keith Murray’s union as The Undergods. But their shared anger and industry outcast status led to some wild energy on that record. They were certainly drawing off the other’s energy in the booth.

The latest pairing of Jay-Z and Kanye West is an interesting one no matter your feelings on either of them. It is easily the highest profile collaborative project Hip Hop has ever seen. This is two multi-time, multi-platinum artists, both with huge egos and reputations for the utmost control over every aspect of their albums. So many factors worked against this album happening; Kanye had just finished an intense recording period and promotional run for his My Beautiful Dark Twisted Fantasy album and was likely due to take time off before going on tour. Two artists and business men with so much going on, it wouldn’t be easy to coordinate schedules to do this. Sure, they have worked together dozens of times as both emcees and as emcee/producer, but an entire album of co-billing is an entirely different animal. Toss in the fact that Watch The Throne was released by Jay-Z’s former label and this only gets harder to fathom that is became a reality.

Hip Hop Collaboration Albums That We Still Wish To Hear

So if Jay-Z and Kanye West can get it together to release an album against all odds, and Eminem and Royce can get back into the studio after a prolonged beef, where is our Nas and AZ album?  When are Crooked I and Tech N9ne going to make it official and actually release an album with both names on the marquee? Aren’t Mos Def and Talib Kweli due to reunite? How about Andre 3000 and Cee-Lo? Two insanely unique, creative artists who can sing and rap better than most people alive when they actually choose to do it. There are only two ways that album could go, timeless masterpiece or horrifying train wreck. Don’t you want to hear it one way or another?

The combinations are endless and emcees seem to be coming around to the idea, what tandem do you want to hear for an entire album?

J-23 is HipHopDX’s Editor-At-Large. He was a full-time member of the staff since 2001, and has was DX’s longtime Music Editor. J lives in London, Ontario.