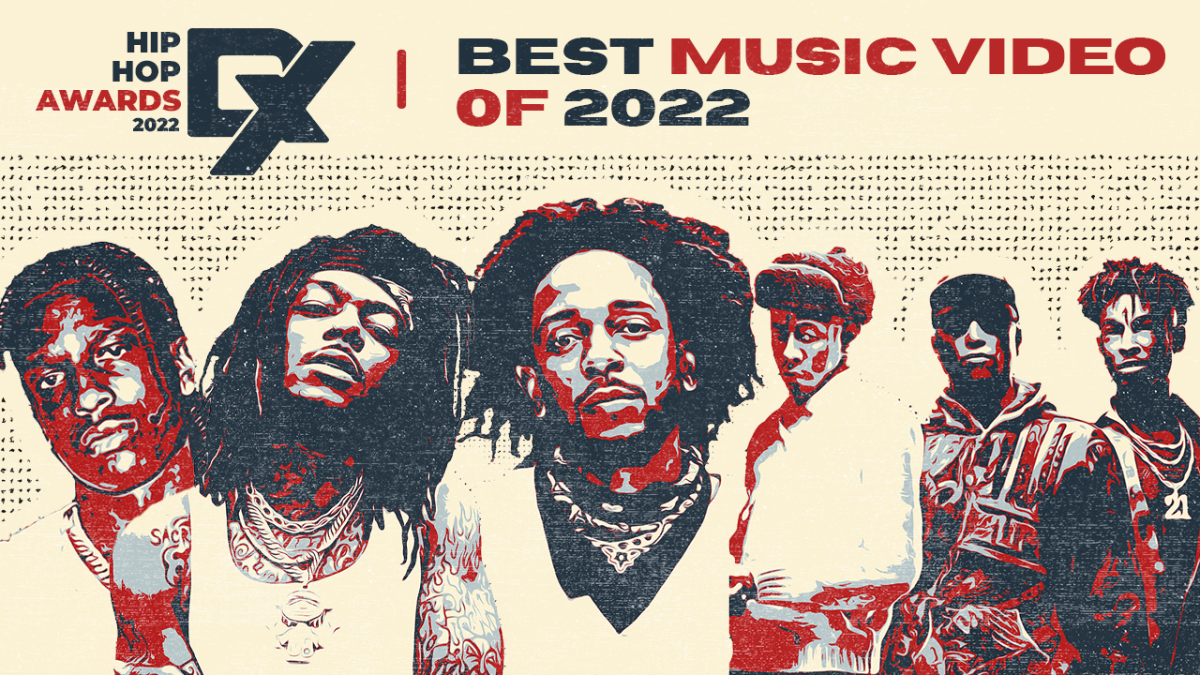 It’s been more than 40 years since video killed the radio star, but nothing has come close to killing music videos yet — not even YouTube algorithms or MTV’s pivot to Ridiculousness.

When it comes to music videos, the truly great stand out not only for their striking visuals, but their storytelling, and what those stories say about us. Kendrick Lamar, whose “We Cry Together” video is up for an Oscar, notched two placements on our list. Elsewhere, an animated video that took more than a year to make and a tale of childhood innocence. These are HipHopDX’s Best Music Videos of 2022.

Review all of our Hip Hop Awards categories and nominees.

Check out the nominees for best music video below. 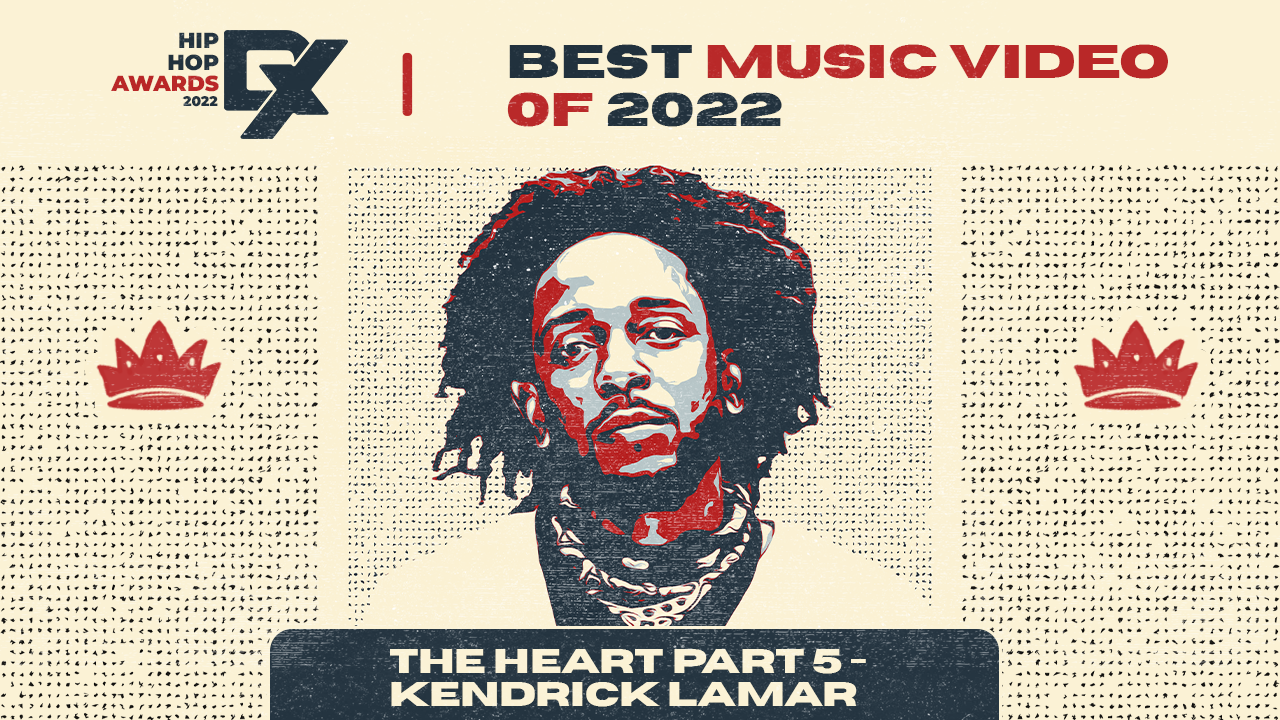 In the age of misinformation, Kendrick Lamar uses deepfakes to ask, urgently and directly, what makes a person good. This question is at the core of Mr. Morale and the Big Steppers, where Kendrick teams up with accused rapist Kodak Black and pop-psychologist Eckhart Tolle to explore transphobia, vaccine skepticism, and Kendrick’s own infidelity and traumas.

Ahead of that album, the video for “The Heart Part 5” explores the question more explicitly, with Kendrick literally transforming into OJ Simpson, Will Smith, Kobe Bryant, Jussie Smollett and the now-truly-canceled Kanye West. He forces the viewer to consider the heritage of Black celebrity, its risks and travails, the pressure and scrutiny. Who does the media focus on, and when, and why, and to what end? Kendrick doesn’t offer any clear cut conclusions, even when he channels the spirit of Nipsey Hussle to console the late rapper’s family and friends. Life is too messy to pretend he has all the answers. The video’s impact and creativity earned it DX’s Music Video of the Year award.

“Cash In Cash Out” welds a breakneck verse by 21 Savage to a serpentine, trunk-rattling beat Pharrell Williams describes as a “blowtorch to the face” that sounds like “electrically-charged black clouds.” The music video carries that same intense, staggering energy, kinetic, tactile, visually overflowing. An endless army of 21 Savages flings money in the air; a legion of disembodied hands crawls across piano keys, as if Thing from The Addams Family just left Elliante iced out. Tyler, the Creator drifts around the set in a Hot Wheels car, clambers in and out of Louis Vuitton luggage on endless repeat as he stomps over the 808s.

What appears at first glance to be an overstuffed stop-motion zoetrope is actually the culmination of more than a year of animation work by Electric Theatre Collective under the direction of François Rousselet over the course of the pandemic. Something so real you could touch it is generated out of nothing but imagination and a little technical alchemy. It takes time to manifest greatness.

Eight days before the birth of their first child, A$AP Rocky released the video for “D.M.B.,” in which he proposes to Rihanna via gold grills reading “MARRY ME?” and she bares her diamond-fitted teeth to respond “I DO.” It’s the pinnacle in a procession of romantic portraits: Rocky kissing Rihanna at the salon, Rihanna leaping into Rocky’s arms as he’s released from jail (twice), a candlelit dinner that ends with the couple fleeing the premises.

Over a hypnotic beat co-produced by Skepta, Shlohmo and Rocky himself, Rocky somehow comes across totally lovestruck while chanting “Roll my blunt, fill my cup/Be my bitch, rub my gut/Rub yo butt, be my slut/Be my cunt, yeah, so what?” Of course Rihanna steals the show even in mere glimpses, hair slicked back donning a powersuit, eyes aglow in the sunlight as Rocky lifts the veil from her face.

“D.M.B.” is (maybe) a wedding video, but it’s also a sequel of sorts to a video from much earlier in A$AP’s career. 2013’s “Fashion Killa” featured Rocky and Rihanna on an after hours shopping spree, rocking matching unreleased Raf Simons Adidas sneakers in Virgil Abloh’s directorial debut. At different points Rihanna wears Supreme and Tom Ford, plants a kiss on a mannequin, drapes Rocky in a cardigan. He embraces her from behind, rapping “Versace, got a lot, but she may never wear it/But she save it so our babies will be fly-er than their parents.” Judging by the “D.M.B.” video, their kid will need all the help he can get.

There are two types of people in life: those who have and those who want. In the video for “Money,” JID zooms in on the latter, a pair of brothers who scrabble for change in coin returns and parking meters, laundromat washers and public fountains. Their mother lingers even when out of frame, ashtrays and prescription pill bottles on the coffee table, heels tossed off on the floor after a night out.

But before it all unravels in tragedy, there is joy. The brothers catch grasshoppers, build blanket forts, splurge on candy and ice cream. The parable might be predictable, but the point stands: “Ironic that being broke is an expensive lifestyle.”

“Why R&B bitches don’t feature on each other’s songs?” Kendrick bursts out. 10 seconds later, he and co-star Taylour Paige are all over each other, desperate to fuck. The nearly six minute video for “We Cry Together” uses a fluid tracking shot to chase the arguing lovers around a one bedroom apartment, a deft visual parallel to the song’s rhythmically precise dialogue.

On Mr. Morale & the Big Steppers, “We Cry Together” serves as a thematic linchpin, the climax of Kendrick’s struggle with romantic relationships. Later, the album turns more introspective, but in this moment, he’s spiteful, obstinate, furious. Paige gives as good as she gets, taunting him for having a little dick, blaming him for Harvey Weinstein’s ignominious arc and R. Kelly’s protestations of innocence. The video brings the song into full Technicolor, shading nuances and backstory with body language and the most minute facial expressions. Jabs that seem harsh on the album are softened by the way Taylour and Kendrick dance around each other; this “vicious fight” is really just a sparring match they’ve done a hundred times before.

Return to our Hip Hop Awards nomination page for more categories or check out the nominees for rookie of the year, best producer & biggest comeback of 2022.

Check out our previous Music Video of the Year award winners.