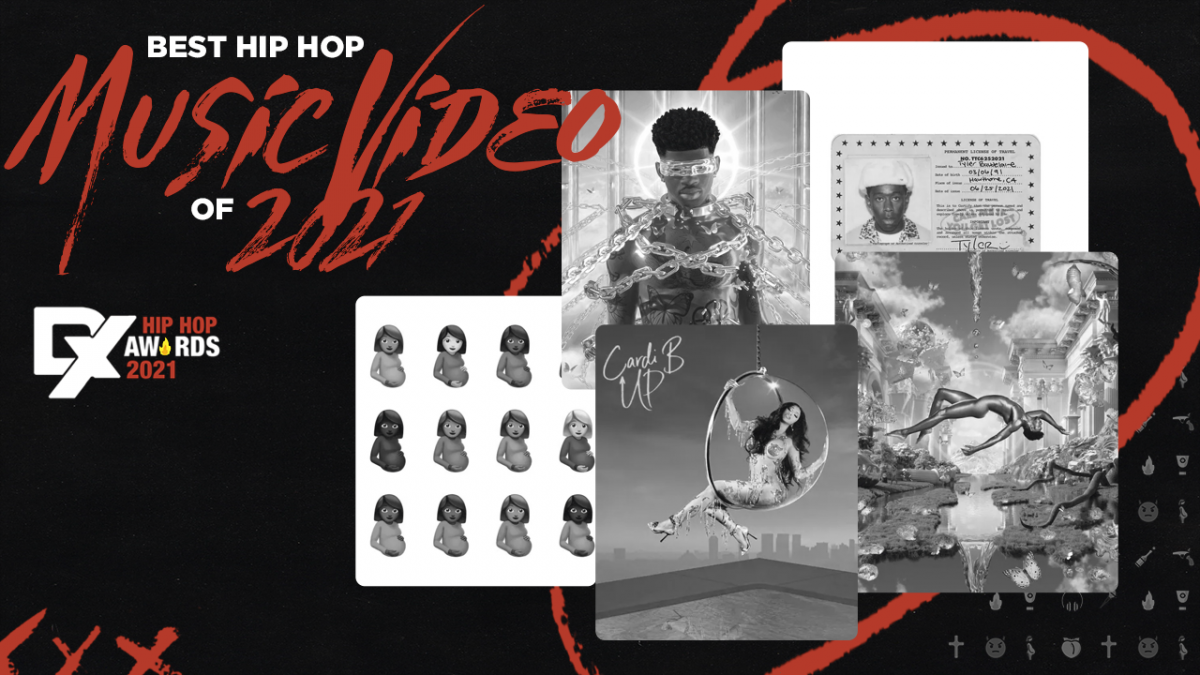 The stakes of music videos rose considerably in 2021. Lil Nas X challenged the status quo with every visual he put out, Drake showed us a lighter side of himself, Kanye theorized on salvation as he rose to the heavens, and Cardi B continued to mix high-class aesthetics with bars about sexual independence. There were so many music videos that pushed the limits of the artform this year, but here are the music videos that did it the best in 2021. Here are the best hip hop music videos this year.

Check out the nominees for best music video below.

It’s hard to think of another rapper that’s had a bigger year than Lil Nas X. From his steamy make-out on the BET Awards stage to his SNL wardrobe malfunction, the threat of one-hit wonderdem that loomed over the Georgia rapper vanished throughout 2021, and it all started with the release of the hilariously controversial music video for “Montero.”

The Tanu Muino directed video finds the rapper/singer giving Satan a lap dance among other colorful obscenities, and the result was a hefty lawsuit from Nike and pushback from Fox News. Cultural commentary aside, the video is gorgeous and transporting with its cotton candy sheen and elaborate costume designs, and not only solidified Lil Nas X as a figurehead for unapologetic queer representation, but also as a compelling storyteller. Another music video that reaffirmed this was the year of Lil Nas X, “Industry Baby” served as a direct response to “Montero’s” conservative blowback. The Christian Breslauer-directed video was initially teased by showcasing a mock trial that trolled the Nike controversy head-on.

An ensemble of clammy, partially-censored nude men dancing in a prison shower quickly agitated fragile conservatives yet again. The rapper had anticipated this and quickly responded by dropping another version of “Industry Baby,” this time with everything fully exposed. Lil Nas X’s concrete stance on both his creative liberties and sexuality made him one of the most inspiring figures of 2021, and “Industry Baby” was a vital part of that journey. It’s one of the best hip hop music videos this year. Cardi B’s kaleidoscopic visual for “Up” was a stimulating melding of unique fashion with colorful green screen backdrops and tightly choreographed dance routines. Cardi’s various wardrobe changes made heads swirl as she bounced from a Francesco Murano “Rolls Royce Dress” to a diaphanous Esmay Wagemans suit, all while the video’s choreography made the rounds on TikTok. Shot over a cotton candy backdrop, the 2022 Grammy nominee continued to show that she remains a force of nature, even without dropping a project. Heads turned when Drake enlisted the help of Future to spit braggadocio rhymes about sex appeal over Right Said Fred’s 1991 hit “I’m Too Sexy.” But the hilariously unsettling music video for Certified Lover Boy’s first single captivated viewers with its playful energy. Drake trolled fans for their interest in him all of 2021, from CLB’s lackluster cover art to the project’s odd leg injury-related postponement.

But “Way 2 Sexy’s” playful homages to Rambo, MJ and The Backstreet Boys showcased a different kind of commitment to the silly and absurd that Drake has always had in his back pocket. He knows fans will absorb whatever content he throws their way, so it seems fair that he may as well have fun with it, and turns out seeing him have fun is lots of fun.

DIRECTED BY: TYLER, THE CREATOR Tyler, the Creator has long been a connoisseur of impressive rap visuals–all the way back to when Kanye crowned “Yonkers” the video of the year–but the world-building aspect of Call Me When You Get Lost unearthed an impressive array of cinematic music videos that were each captivating enough to warrant a place on this list.

The music video for “WUSYANAME,” directed by Wolf Haley (Tyler’s alter ego), thrived in its simplicity. As Tyler narrates his journey to find “this Brioche my boy told me about,” he pulls up to a scenic cafe and instead stumbles upon a disinterested young woman who he attempts to swoon by rapping at her as she brings a croissant back to her boyfriend. “WUSYANAME” – with its hilarious satirical takedown of rappers who try to steal girlfriends and lush California backdrop – immerses the listener in Tyler’s awkward world and is one of the best looking videos of the year.

An uplifting and insightful examination of the afterlife, the music video for Kanye’s “24” illuminates the complexities of the rapper’s quest for salvation. The Nick Night-helmed video merely follows Ye floating through the clouds, flooded by warm memories of his mother. But Kanye’s aimlessness in the video slowly morphs it into a heartbreaking examination of whether such salvation exists at all, especially when the world’s on fire. It’s Kanye’s gentlest approach to spirituality, and his most compelling.

The hidjiworld-directed video for Pi’erre Bourne’s “4U” is saturated in a warm, sepia hue that makes Bourne’s meandering journey around his old neighborhood feel brisk and nostalgic, like you wanna throw on a hoodie just watching it. As the hitmaker vies for the woman he loves, he warbles over a blurry collection of lo-fi synths that embellish the chilly feel of autumn. It almost got nominated for best hip hop music videos this year.

The difference between Remble and his Drakeo the Ruler-inspired Los Angeles constituents has always been his ability to craft full sentences littered with oddly specific details, as if he’s penning a thesis on murdering opps.

While connecting with Lil Yachty on his Michigan rap kick seemed like a no-brainer for the San Pedro rapper, seeing both artists merely chill in the studio with their friends gives the video for “Rocc Climbing” a sincere lackadaisical nature that makes it a relaxing watch. It’s one of the best hip hop music videos of studio time this year.