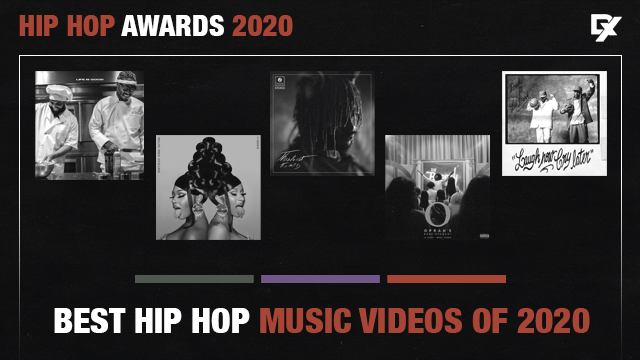 Alongside every great hit single is a new music video that creatively bolsters the song’s message. Powerful rap videos will always propel a song to its highest potential and in 2020, we were lucky with the fresh visuals offered.

Every year, HipHopDX staff joins in discussions, debates and sometimes heated arguments to come up with a list for our Year End Awards. Review all of HipHopDX’s 2020 award categories and nominations before the winners are announced beginning December 28, 2020. Drake and Future got real jobs in the Director X-led “Life Is Good” music video.

The historic duo of Drake and Future came together for “Life Is Good,” one of the biggest tracks of the year which is supported by a fantastic video directed by Director X. With almost 1.3 billion streams on YouTube at the time of writing, this tongue-in-cheek visual puts the 6 God and Pluto working jobs like the rest of us. Incredible shots of a greasy Drake working on the underside of a car or Future working the drive-in window at fast food joint present the two superstar MCs in a humorous and lighthearted manner, far outside of their usual portrayal. Future attempting to flip a cheeseburger is enough to warrant a nomination alone.

Some of Our Favorite Music Videos From 2020

Thundercat and Zack Fox collided for “Dragonball Durag” one of 2020’s funniest and most creative music videos.

Maybe it’s the bust-down Gucci belt that kept you hooked on Thundercat’s phenomenal music video for “Dragonball Durag.” Maybe it’s the fuzzy cat ears, bug-eyed glasses and silk shirt he’s wearing. Or maybe, Thundercat’s hysterical hip-thrusting and crawling was captivating. Shot in a lo-fi style that perfectly matches the R&B singer’s smooth tones, “Dragonball Durag” shows Thundercat isn’t taking himself too seriously — in the video he dances for various women, all who shake their head and leave confused. His awkward but hilarious dancing makes for an enjoyable and uplifting watch.

Yes, that’s right — another Drake nomination. Champagne Papi came through with an all-star array of features (literally) for the music video of “Laugh Now Cry Later” featuring Chicago’s Lil Durk. Veteran director Dave Meyers, known for his work on music videos from Travis Scott’s “SICKO MODE” to Kendrick Lamar’s “Humble,” assisted the Toronto superstar as he raided the Nike HQ, shot hoops with Kevin Durant and played toss with Odell Beckham Jr. Iconic imagery is recreated, such as Muhammed Ali throwing punches underwater and baggy suits reminiscent of 1990s NBA Drafts. Drake might need to work on his three-pointers but when it comes to music videos, he just doesn’t miss.

Lil Yachty looks great in a wig for the music video of “Oprah’s Bank Account” featuring Drake and DaBaby.

2020 brought a lot of surprises, but absolutely nobody expected to see Lil Yachty cosplaying as Oprah Winfrey. With over 20 million YouTube views, “Oprah’s Bank Account” by Lil Yachty with assists from Drake and DaBaby is one of the most outlandish music videos of the year. Lil Boat, clad in a wig and an assortment of cashmere sweaters, interviews DaBaby and Drake as Oprah. With Yachty as creative director and Julien Christian Lutz, this razor-sharp and focused music video shows off the lighter side of things and proves Yachty’s bubbling bars pair nicely with pearl earrings.

When the queens of rap, Cardi B and Megan Thee Stallion dropped the accompanying music video to their absurdly viral hit “WAP,” the internet broke. Directed by Colin Tilley, the “WAP” video is a twerk-fest of epic proportions. The resulting dance exploded on social media sites such as Instagram and TikTok. When Kylie Jenner stepped on screen, everyone had something to say. Some loved her inclusion, while she drew ire from others. However, nobody can disagree that it was one of the biggest conversations to come from a music video all year.

No year end list would be complete without Roddy Ricch’s “The Box.” After going No. 1 on Billboard with no music video, Roddy secured the budget for this fast-paced, visually stimulating video that shows impressive levels of creativity.

Seeing Eminem pop up on the Lyrical Lemonade YouTube channel was one of the more surprising things to happen this year, but the video didn’t disappoint. From the visual effects to the Mike Tyson and Dr. Dre cameos, this video was entertaining from beginning to end.

The queen of music videos has delivered some of the most iconic videos in rap history and in 2020, Missy Elliott continues to outshine her competition with “Cool Off.”

Directed By: BenMarc Shot This

NLE Choppa’s growth has been one of the most interesting storylines of 2020. The “Bryson” music video was one of the first times fans got to witness his spiritual journey on full display as he gives a peak into his current mindstate.

In 2020, SZA made her triumphant return with the self-directed music video for “Hit Different.” If the teaser at the end is any indication, fans will receive more music videos from the TDE singer in 2021.

Joyner Lucas paid homage to all of Will Smith’s classic movies in the “Will” video. And apparently he did something right because the video garnered the attention of Mr. Smith himself, who even hopped on the remix to the track.

Anderson .Paak memorializes a moment in time with this music video. From the masks to the protests, fans will always remember where they were while watching this. Not to mention the inclusion of a surprise verse from Jay Rock.

The Weeknd’s commitment to his Las Vegas act throughout all of 2020 has been impressive and the “Blinding Lights” music video encapsulates his entire era.

Seeing two little kids pretending to live the lavish life of rappers is always fun, but the actors playing Pop and Quavo in this video took things to the next level.

Drake and DJ Khaled delivered comedic gold in the intro to the “Popstar” video, and having Justin Bieber playing Drake made this one of the most enjoyable music videos of the year.

Lil Baby delivered one of the most powerful visuals of the year right in the middle of nationwide protests.