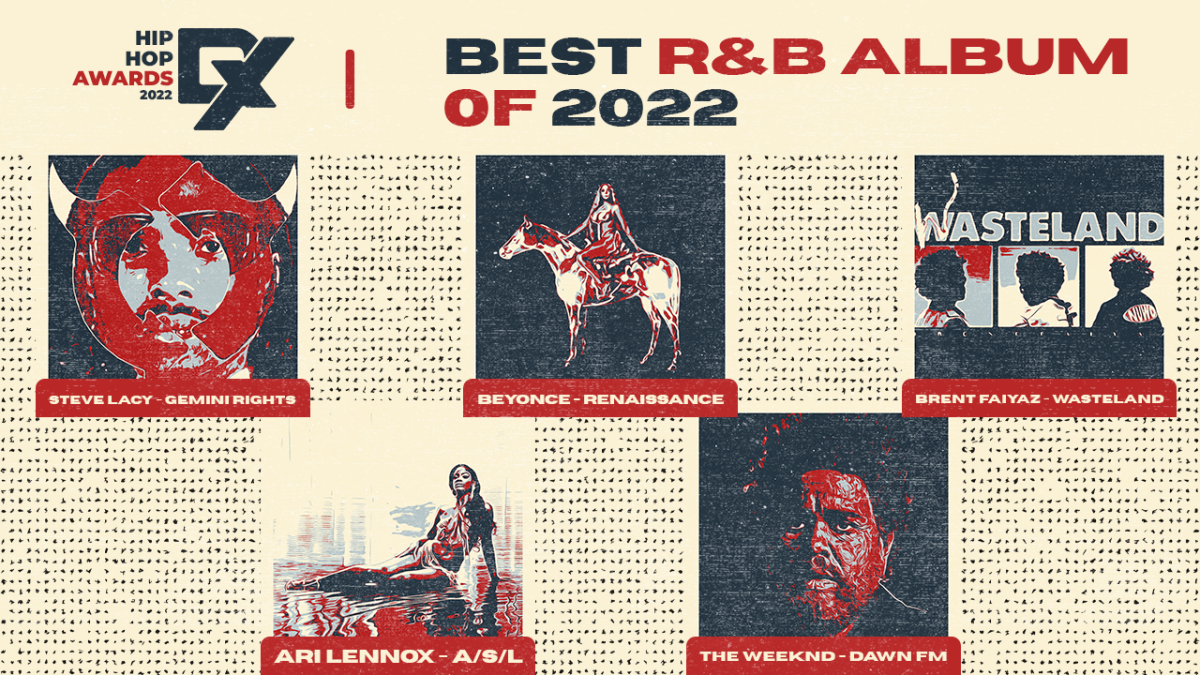 Although 2022 was by no means a smooth year globally, there was no shortage of soothing new R&B albums to provide listeners with some healing. Some new stars made their mark, while a number of prominent artists in the genre dropped new projects for the first time in years.

The Weeknd started out the year by providing his most upbeat project to date, Dawn FM, while Steve Lacy had a breakthrough project with Gemini Rights, solidifying his status as one of the most innovative artists in the space.

Elsewhere, Brent Faiyaz dropped his long-awaited sophomore album and didn’t disappoint; Ari Lennox returned after more than three years with a magnificent project; and Beyoncé brought the dance vibes to the mainstream with her first album since 2016’s Lemonade.

Beyond our top five nominees, there were so many great new R&B albums released this year that everyone on this list deserves your ears.

Editors Note: New R&B album selections were restricted to between December 1, 2021 to December 1, 2022. Nominees are in alphabetical order and honorable mentions are in no particular order. 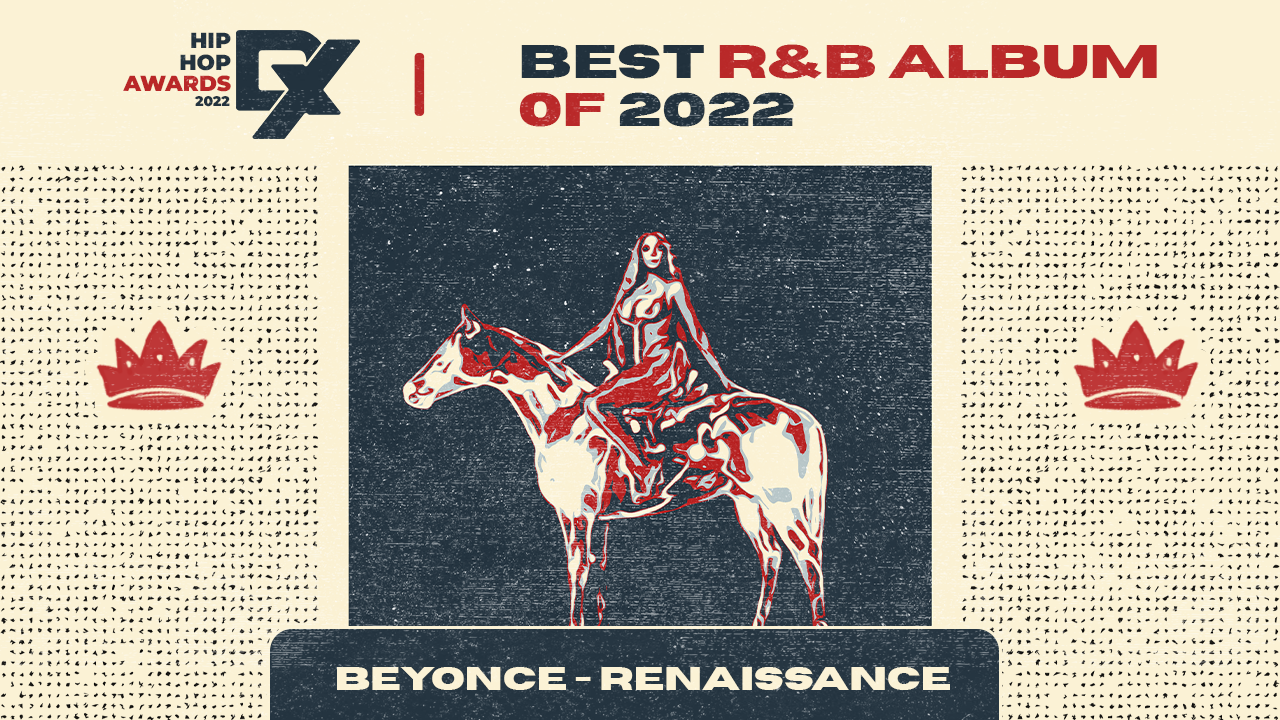 Since her debut in 1997, Beyoncé Giselle Knowles-Carter has become the standard for this generation. She checks all the boxes: a powerhouse voice, a slew of hit songs and an unmatched ability to put on a show. Now, the world’s greatest living entertainer is back evoking the likes of Chaka Khan as she ascends to a Queen of the dance floor. In the past, she’s flirted with the idea of making dance music — “Schoolin Life” and “Blow” were fun flings — but on Renaissance, she’s fully committed to the genres of ballroom and house and with help from some Black queer icons. Renaissance is a clear call to return to the place where nothing matters: the dance floor. Beyoncé possesses a ferocity that can’t be touched nor mimicked, and that self-confidence oozes from the album. Renaissance is a gallant body of work from an artist that has proved time and time again that she will take the risk no matter the results. Far from simply being a collection of good songs, Bey’s seventh studio outing is a colorful, euphoric and glittery celebration of what has passed and what is still to come. — Precious Fondren 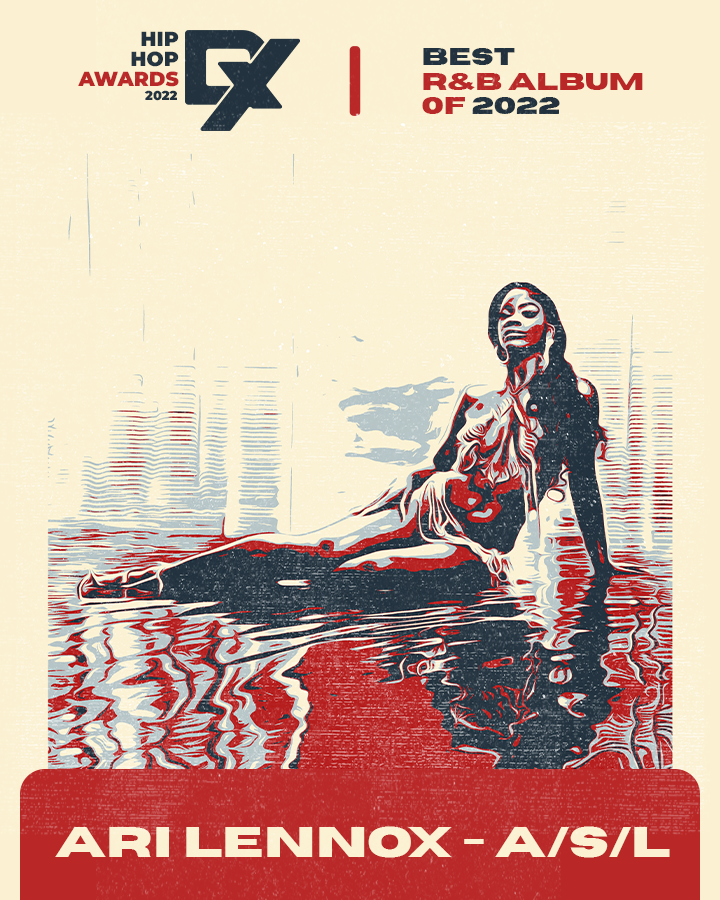 Swimming in a slew of neo-soul beats and transparent lyrics about self-love and sex, age/sex/location is exclusively for the grown and sexy. The album bursts with soul as Ari Lennox takes listeners through the ups and downs of a romantic relationship that ultimately carries her to choose herself. As soon as the slightly melancholic piano begins on opener “POF,” Lennox cruises through A/S/L with an updated take on the early 2000s neo-soul movement that birthed legendary artists like Erykah Badu, Maxwell and D’Angelo. If one were unfamiliar with Lennox, it wouldn’t be a stretch to think she debuted during this era. Her sound leans heavily on slow-tempo beats, jazzy horns and sensual melodies, making Lennox a standout amongst many of today’s R&B artists that rely on an experimental sound that unfortunately leads to vocals taking a backseat. A vulnerable, sexy and fun record, age/sex/location is a fitting eye-roll at the “R&B is dead” debate. — Precious Fondren 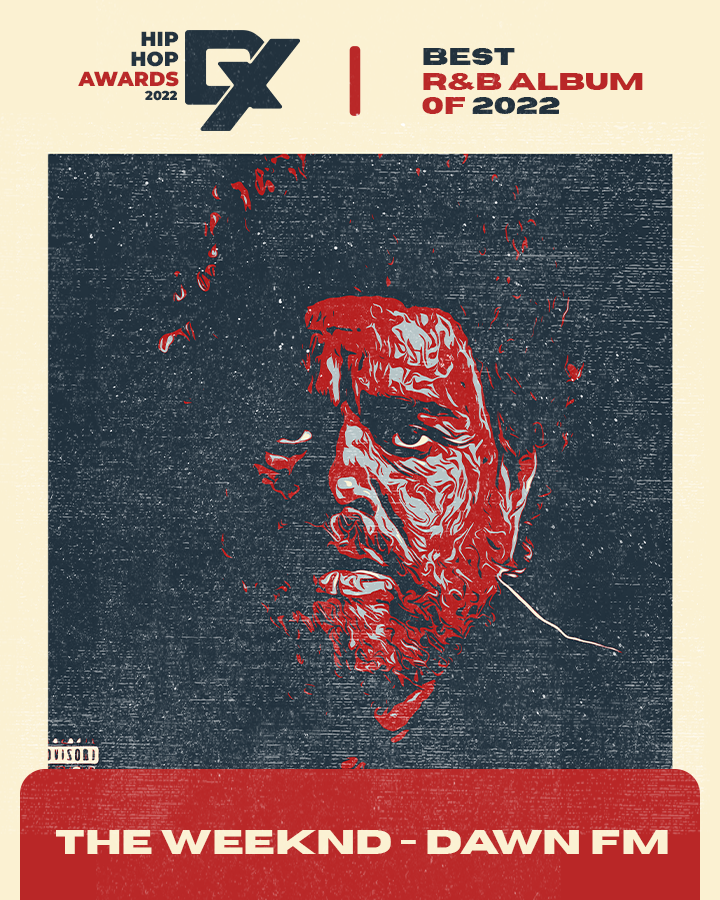 Dawn FM traps the listener in Purgatory, as The Weeknd gathers an audience for his sonic love letter to the ’80s, marked by the metallic sounds of Depeche Mode, The Human League and all-night disco parties. The euphoria of ’80s R&B, new wave and synth pop carry the superstar to new heights. This hyper-focus on a singular sound is a heat check for The Weeknd, whose ability to weave multiple genres into one project was previously a perceived strength. Strictly adhering to high-powered disco principles, he uses minute intricacies to captivate the listeners and avoid becoming stale for 16 tracks. The album is an exhibition of pure ambition from an artist that’s reached the mountaintop. It’s apparent that this was the album The Weeknd always wanted to make, whose flair for the dramatic and glamour always aligned with the bygone icons of the ’80s. — Matthew Ritchie 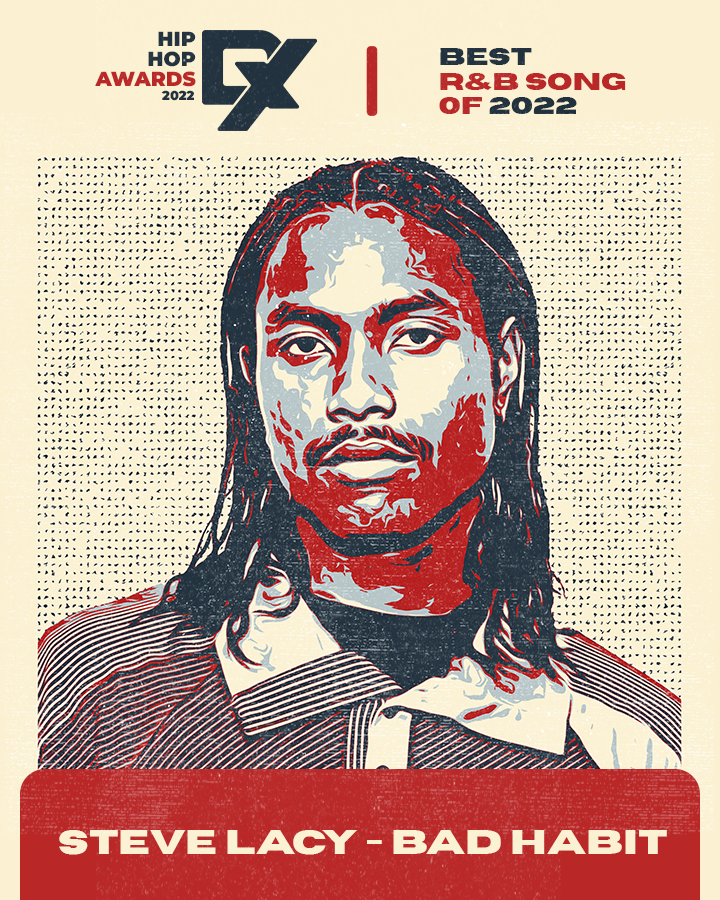 Steve Lacy will play both sides of the Gemini antagonist card — lover and/or heartbreaker — as long as he gets his feelings out on paper. Gemini Rights, his sophomore album, may be his most divulging work to date, a delightful, insane experience of colors through sound. 10 songs capture 10 moments in time through prancing drums, liquid riffs and sometimes, by simple crooning syllables. “Bad Habit” sounds like the 2019 demo track “Dark Red,” featuring distinct lackadaisical funk. That’s thanks to bouncing snares and whimsical synths, a signature sound Lacy remains tried and true to because it’s quite effective. Even still, Gemini Rights takes him to new heights, peeling back the layers of Lacy with each song. “Give You The World” pulls from ’70s dance floor slow jams, soft grunge rock and R&B meet in “Buttons,” and a Mariachi band carries the rhythm in “Mercury.” And if his range wasn’t expansive enough, his feature selections prove less is more with Matt Martian and Fousheé (who practically made “Sunshine” her own). Gemini Rights is an ear-pleasing saga and evidence of Lacy’s comfortability with self and creative freedom. The album focuses on feels rather than facts, resulting in a project with the potential to withstand the wear of time. — Lauren Floyd 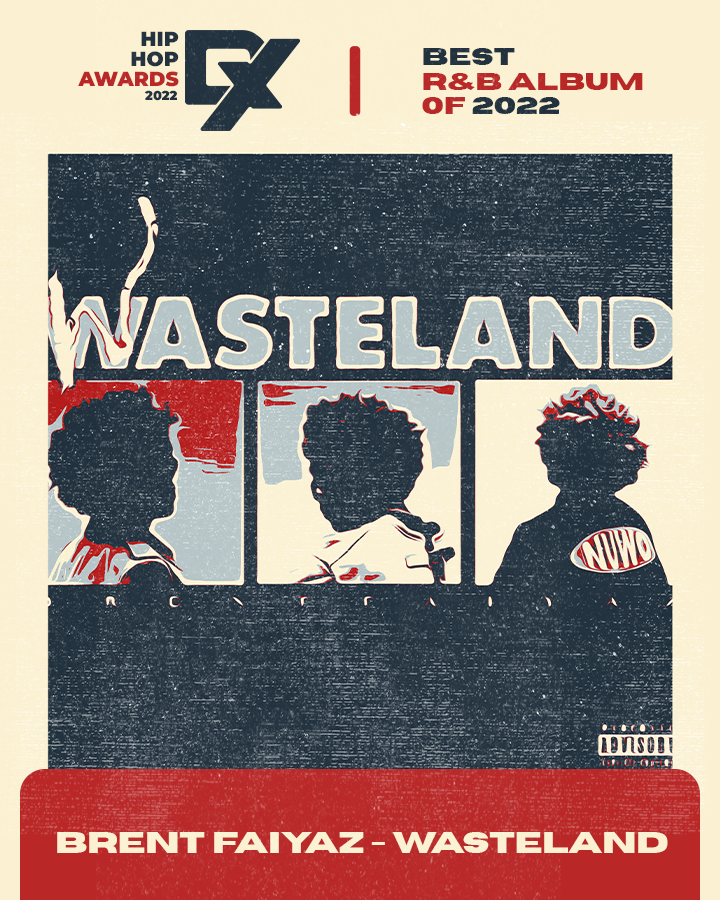 Brent Faiyaz starts his new album Wasteland with a philosophical inquiry: can a man still be fundamentally good with a past tarnished by sins and mistakes? The binary between good and bad has been a theme Faiyaz has played with since his previous album Fuck The World, but on Wasteland he bares all of his faults and forces the listener to reckon with their perception of him. Where Fuck The World and 2017’s Sonder Son embraced plug-and-play formats, Wasteland feels more insular, as though it was created in a vacuum, safe from the ubiquitous drone which fills so many playlists. His latest doesn’t stray too far from his past work, but the inscrutable attention to detail is the closest he’s gotten to nailing his intention. — David Aaron Brake The only way for Drake to get bigger is to go back to the songs that did a billion streams and embedded themselves in listeners’ collective consciousness: “One Dance,” “Hold On, We’re Going Home,” “Take Care.” Minimal swearing, friendly-to-all settings, inoffensive enough to play in the background but thoughtful enough to reward closer listening. Honestly, Nevermind is an understated pop album made to be listened to with other people, a Drake album with refreshingly low stakes, much to its advantage. This pivot also offers Drake a way to relate to listeners without sharing too much of himself. Pop music often hinges on non-specificity, allowing listeners to fill in the silhouettes of “you” and “me” with their own personal details. Throughout Honestly, Nevermind, his verses are spare, often allowing the production to communicate as much of the emotion as his pleas for connection. Honestly, Nevermind isn’t for everyone, but it will be everywhere. As the late Virgil Abloh says halfway through the album, “We weren’t supposed to come up with something this clean. Like, something happened.” He stopped making the Drake album we want him to make and made the Drake album Drake wanted to make. — Vivian Medithi Hypnos was the gentle Greek god of sleep who sedated subjects by song as a singing bird. Hypnos, Ravyn Lenae’s debut album, carries the same mystic, dreamy hold. The 23-year-old Chicago singer warps time as Hypnos moves through holographic reverbs and whispered lullabies. Lenae takes control of her vision, handpicking every contributor and writing every lyric to produce a homegrown experience. despite its space-age grooves and visuals. Since the introduction of her new-dimensional wavelengths on 2016’s Moon Shoes, Lenae’s thrifty selections have matured into futuristic playgrounds warmed by angelic falsettos and sensually guided lyrics. Its’s been a long road for Lenae, who toured with SZA and Noname while still a high school student training in classical music. What she’s taken from her classical training pours effortlessly over Hypnos, an album that fits in some unknown space-time continuum, and gives Lenae a path forward as a unique breakout voice in R&B. — Lauren Floyd While Kehlani’s sophomore work pined for growth without knowing how to get there, the singer’s third album Blue Water Road is assiduous in examining internal faults. Blue Water Road‘s frank maturity, even with its brief detours, reveals an artist’s authentic pursuit of happiness. From Kehlani’s candid songwriting to Blue Water Road’s vibrant backdrops, the album serves as evidence of what happens when someone finally begins to take responsibility for their own happiness. What emerges is something that treads into uncharted waters and even if it isn’t fully understood yet, it can at times be quite a spectacle. — Mackenzie Cummings Grady

HEART ON MY SLEEVE – Ella Mai Ella Mai’s sophomore release is far easier felt than understood. Between songs about making up and breaking up, there’s no resolution offered to the soft-hearted star. Instead, Heart On My Sleeve showcases how emotions often coexist to contradict. The confessional nature of the album allows for Ella Mai to funnel a Rolodex of feelings into a single collection. By surrendering to the magnetic power of her emotions, Mai is pushed and pulled from obsession to indifference — and back again. The album pulls off a rare feat by squeezing opposite ends of the emotional spectrum into one project with equal intensity. As Ella Mai matures and grows, her music becomes more weathered and wise, leading to a clear improvement in artistry. — Rebecca Barglowski

Amber Mark made a name with R&B recreations of beloved ’90s songs such as Nirvana’s “Heart Shaped Box” and Sisqo’s “Thong Song.” But the Tennessee songstress has her own story to tell. On Three Dimensions Deep, Mark bares all her hurt, grief and insecurities, enveloped in existential dread and life’s cruel clutches. In 2013, Mark lost her mother and that void left in her wake influences her music; a fruitless journey to search for meaning amidst the challenges of young adulthood and the senseless nature of tragedy. Juxtaposed by upbeat production that uses elements of dancehall, R&B, gospel and Hip Hop, the multi-faceted album brings her songwriting and vocal performance to new heights, with Mark pondering the universe’ greatest ills and vices. The complex project proves Mark’s lofty ambitions are attainable, finding comfort in the absurdity of self discovery. — Josh Svetz

Return to our Hip Hop Awards nominations page for more categories or check out the nominees for Best R&B Songs, Biggest Comebacks and Best Rookies.

Check out our previous R&B Album of the Year award winners.