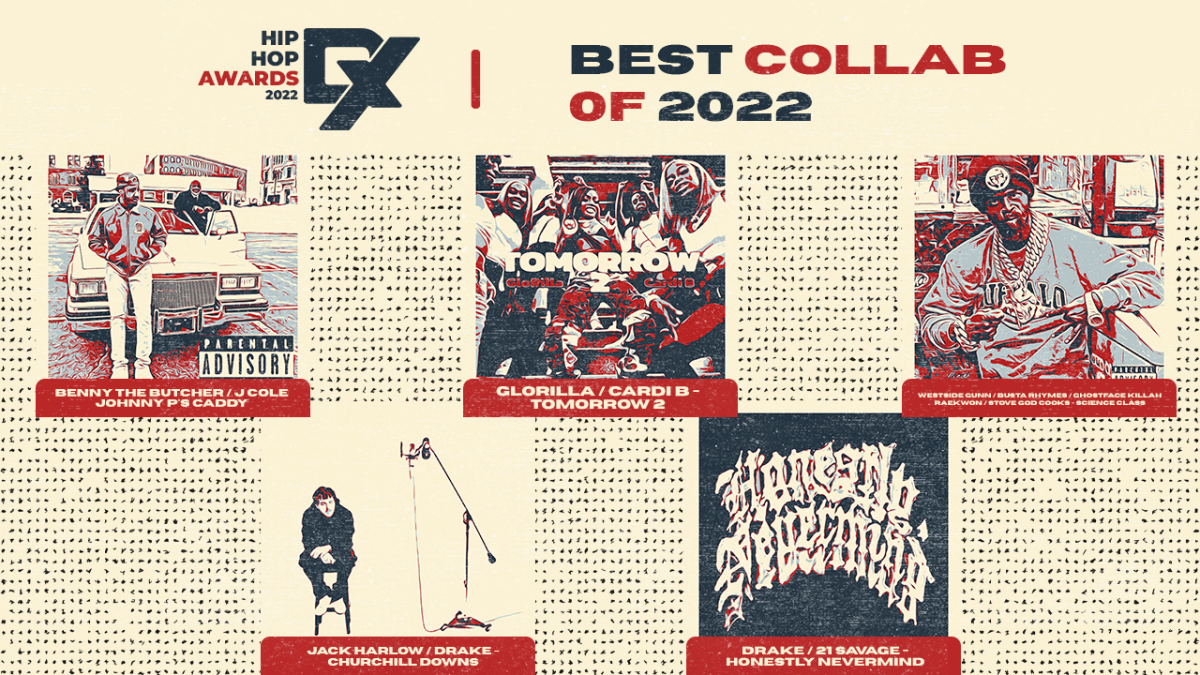 2022 was a year that saw great turmoil in our contemporary society by all accounts. Apparently, COVID-19 is here to stay, global inflation is out of control and all too many of our favorite young rap regulars died violently. However, there would be no shadows if there was no light. And the light that Hip Hop granted us in these tumultuous times was significant.

Artists collaborations were both artistically classic and contemporarily relevant, with both new and old school favorites recording some very good music. From drill inspired beats that push the rhythmic pace forward, to tracks that provide the surfboards upon which they dip and slip from one rhyme to the next, the ardent and intrepid listener can enjoy Hip Hop that is creatively unique in some instances, while being contemporary and familiar in others.

The nominations for 2022 Collaborations of the Year exemplify a myriad of beat styles while the emcees that use them to their fullest potential are at the top of their game as they exchange bars and energy with other artists on the track.

Here are the nominees for HipHopDX’s Collaboration of the year. 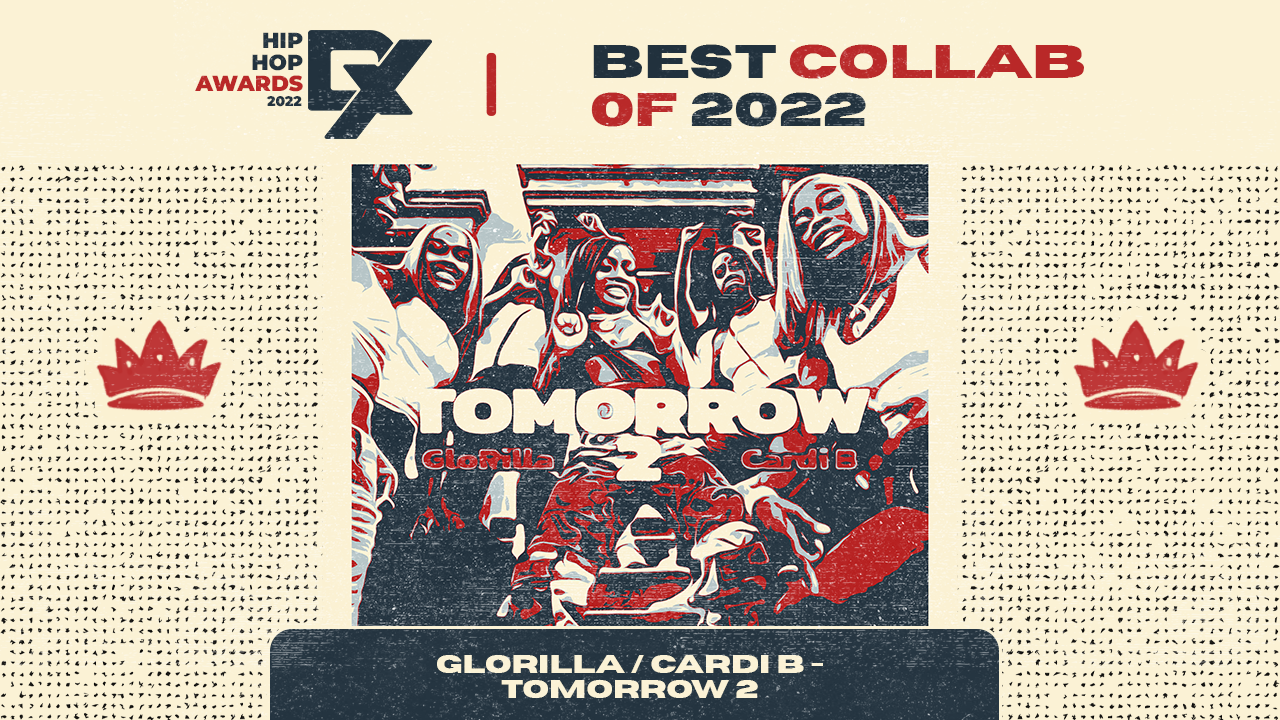 On “Tomorrow 2,” GloRilla calls upon her new BFF Cardi B to cut up over the production of Macaroni Toni. As is the case for many of the most prominent rap singles of 2022, “Tomorrow 2” is powered by an uptempo drill beat that forces both Cardi B and GloRilla to speed up their respective cadence, which both do flawlessly. GloRilla’s signature vocal qualities blend excellently with those of Cardi B. Both Gloria Woods and Belcalis Almánzar relentlessly tag team the track into submission with tales of aggression and braggadocio toward rivals and naysayers. There may not have been a more perfectly paired Hip Hop duo this year. 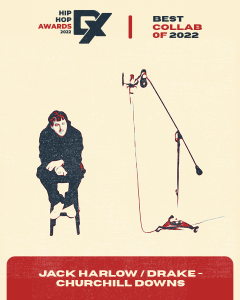 Churchill Downs sees Jack Harlow and Drake on a rather subdued, laid back track that provides a tempo for them both while allowing the two rappers room to flex on doubters, women, and the spoils of being two of the biggest names in a billion dollar industry whose fans are notoriously fickle. The vocal qualities and cadence of both Drake and Harlow complement each other like red wine and a good steak. Producer Ace G’s melodic track lays the framework for their bars to flourish. 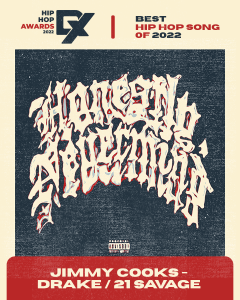 On “Jimmy Cooks,” Drake and 21 Savage come together as two of the hottest contemporary rhyme sayers in the game. But, of course, to varying degrees. On this offering, Drake rides over a well-worn road that sees him spit about introducing women to his extravagant lifestyle while simultaneously chiding rappers that are not on his level. The single, off Drake’s Honestly, Nevermind, sees Drake and 21 Savage use their chemistry to maximum effect, as each rides the relentlessly energetic rhythm to great effect. 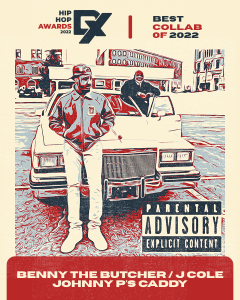 The collaboration between Benny the Butcher and J. Cole is true to the spirit of the immortal boom bap of yesteryear, with a mesmerizing track laid by the Alchemist. Just as electrons and protons are responsible for electrical charges, so too do their rhyme styles make an incredible, if not somewhat adversarial, combination. While Benny the Butcher’s flow waxes nostalgia about times of uncertainty and struggle while taking shots at individuals who write rhymes that fantasize about the life that he actually lived prior to finally putting Buffalo, NY on the Hip Hop map, J. Cole’s lyrical lacerations appeared to be aimed at an entire generation of emcees whose lack of imagination has them continuously wallowing in a mire of drug and gun lyrics. Cole also rhymes that he is the best rapper alive while capping off his Super Saiyan flow that sent shockwaves through his peers, including Benny the Butcher. 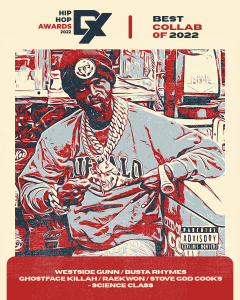 Sonically, “Science Class” is reminiscent of a simpler time in Hip Hop. However, the catchy little loop ebbs along at a medium tempo and provides enough room for each of the considerably talented lyricists to roam. Featuring Busta Rhymes, Raekwon, Ghostface Killah and Stove God Cooks, “Science Class” incorporates all of the elements of a really dope collaborative effort in which all the bars shine independently of one another yet mesh. The track is a simplistic but rhythmic offering from Swizz Beatz, who brings the veteran emcees back to their respective primes. It’s as if a time traveler from 1995 fell from the sky and landed in the middle of Time Square in 2022, and this tape happened to be in his Walkman.

Return to our Hip Hop Awards nomination page for more categories or check out the nominees for best rapper of the year, best rap verse and biggest comeback of 2022.

Check out our previous Best Collaboration of the Year award winners.