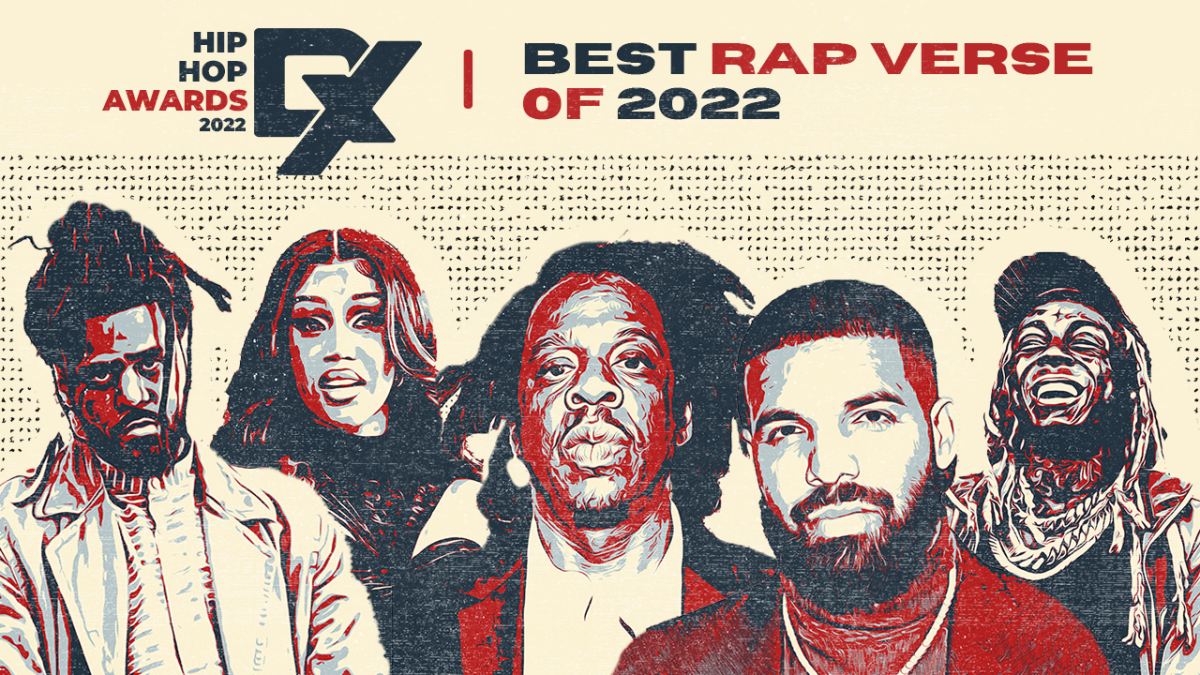 The first full year of the world being back outside without quarantine restrictions proved to be a fruitful time for Hip Hop. Artists were bursting out the gate and gunning for that top spot with all the music they’ve given fans over the last 12 months.

There were quality albums, hit singles, innovative music videos and more. But one of Hip Hop’s core elements was well-represented by some of the game’s most recognizable names. With the culture — and the world — back outside, these rappers showed out and displayed the lyrical daggers they’ve been sharpening. Cardi B turned back the clock to remind fans the bars were still intact while J. Cole and Drake showed why they’re the best of their generation at what they do. On the other hand, Lil Wayne held his own on a song that featured a show stopping JAY-Z verse that redefined what it meant to rap at an elite level way past an artist’s prime.

There has always been a debate in Hip Hop regarding the lack of lyricism in this melodic-friendly music landscape, but this group proved the spirit of barring up is alive and well in 2022. 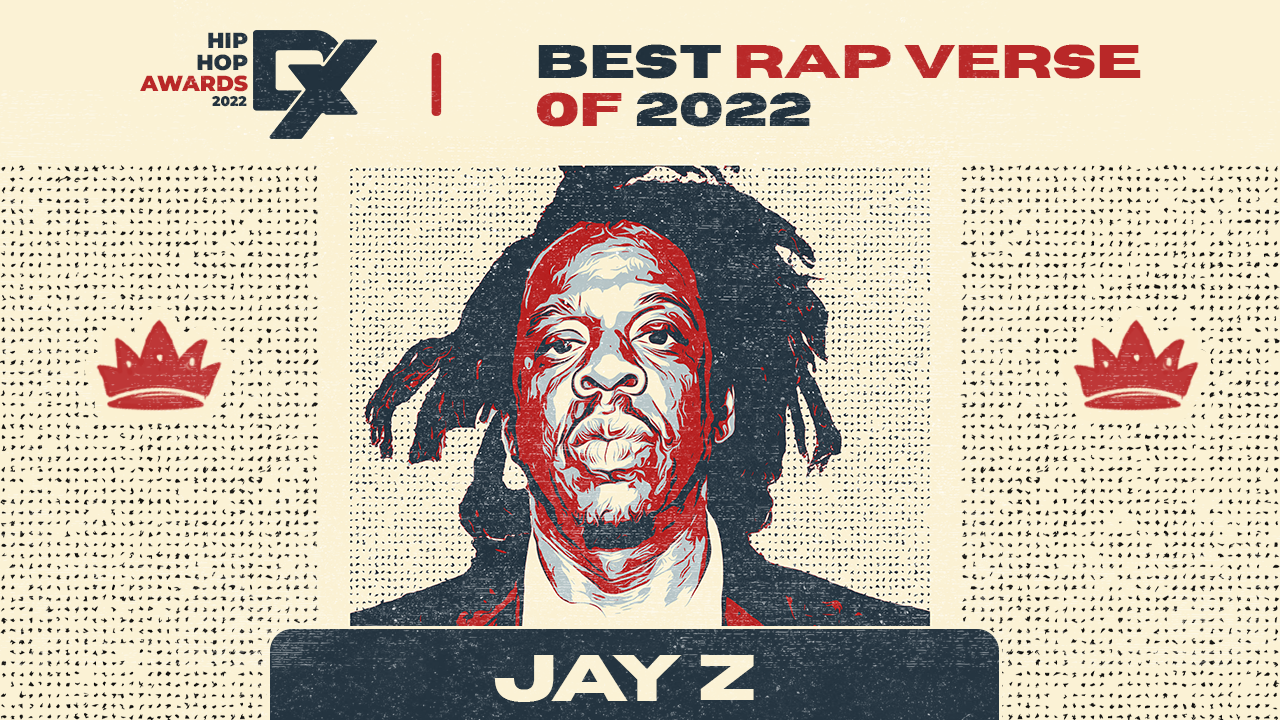 The promotional rollout for the single “God Did” saw DJ Khaled claim JAY-Z had the verse of the decade on the record. Many were interested, while others felt Khaled was being his usual outrageous self. But when the song dropped alongside the album of the same name, the world stopped and tuned in. JAY-Z knew he had an audience that wanted to hear what he had to say, and fans left with more than they expected. The verse is four breaktaking minutes of the Brooklyn rap legend detailing his journey as a hustler to becoming one of the greatest and most successful rappers of all time. ”I left the dope game with my record clean, huh / I turned the cocaína into champagne, huh / I cleaned up la madrina with the same soap, huh / Me and Loro talk ’bout how we slang dope, huh.” It was so incredible that MSNBC’s Ari Melber dissected it on his show The Beat, where he highlighted JAY-Z’s amazing ability to tear down the country’s justice system while also showing off that he and his team are still doing activities that were once deemed illegal. “I’m now careful with the sentences, them only jail bars I like / I never wanted to be the state custodian / The laws are draconian / For those married to the life, it’s holy matrimony and / Somehow, I’ll out-fox every box they’ll try to throw me in.” Another haymaker from Hov. 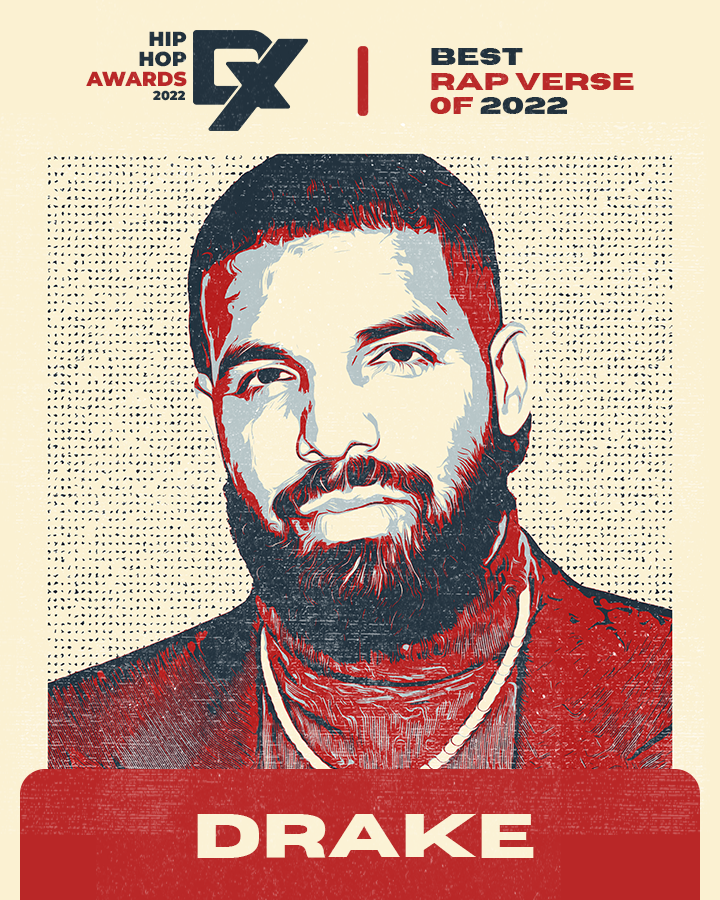 Jack Harlow was not afraid to say how much of a Drake fan he was during interviews. He hoped to get a chance to collaborate with heartbreak Drake, which came true on “Churchill Downs.” The Louisville native gave a valiant effort with his verse, but it wasn’t anywhere near what the 6 God spit. Drizzy was a few months removed off the release of his sixth studio album, Certified Lover Boy, and didn’t miss a beat with his lengthy verse, stealing the show with his elite introspective bars that touch on everything from his parent’s divorce, abandonment issues, raising his son in a difficult world, his insatiable hunger for revenge and more. “How much water can I fit under the bridge before it overflows? / My son’s gotta learn that forgiveness is a lonely road / The cribs on his will like motor homes.” He also went on his usual flexing tour, describing his iced-out jewelry and the high-class dishes he eats on the regular, finally admitting that he’s too rich to be relatable anymore after building a career off relatability. “It’s not even debatable / I’m gettin’ so rich, my music’s not even relatable / I blow her head up, it’s an inflatable / Baby blue G class, I feel like a kid again / Prayin’ on my downfall don’t make you religious, man.” At least he’s honest. 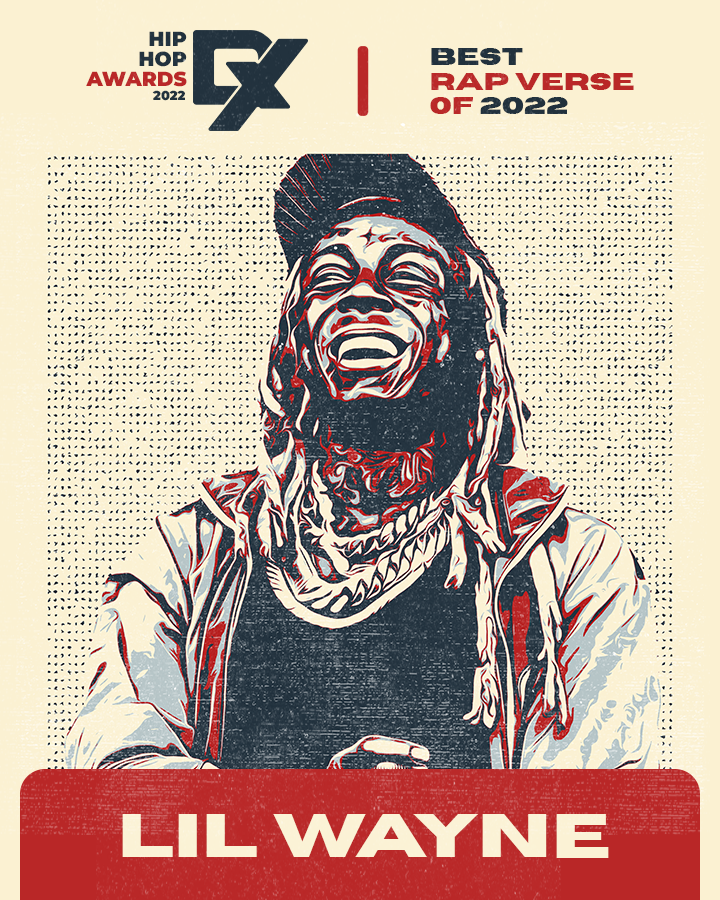 Lil Wayne had another banner year in 2022 with a crazy feature run that saw him team up with The Weeknd, JID, Latto, Jack Harlow and more. However, one feature stood out over the rest given the magnitude of the song and how Weezy held his own with his verse compared to the other much-talked-about appearance. DJ Khaled’s “God Did” may be known as the record that JAY-Z absolutely obliterated, but Lil Wayne’s verse was just as good, if not better, than Hov’s. Weezy F Baby got in his bag and gave fans a run-through of why he’s one of the most influential rappers in the game. “God did His thing when He made me / With the odds stacked against me, I could crack Da Vinci / I know only God can judge us, I say that for Brittney.” Wayne touches on the critics who wrote him off, the hopefuls that stuck through the downtime and calls himself the apex for inspiring this current generation of rappers. “I made the culture, what up, twin? They relate back / I fucked the world and when I did, I practiced safe sex / I pray more and said less, God did the rest.” Indeed Weezy, indeed. 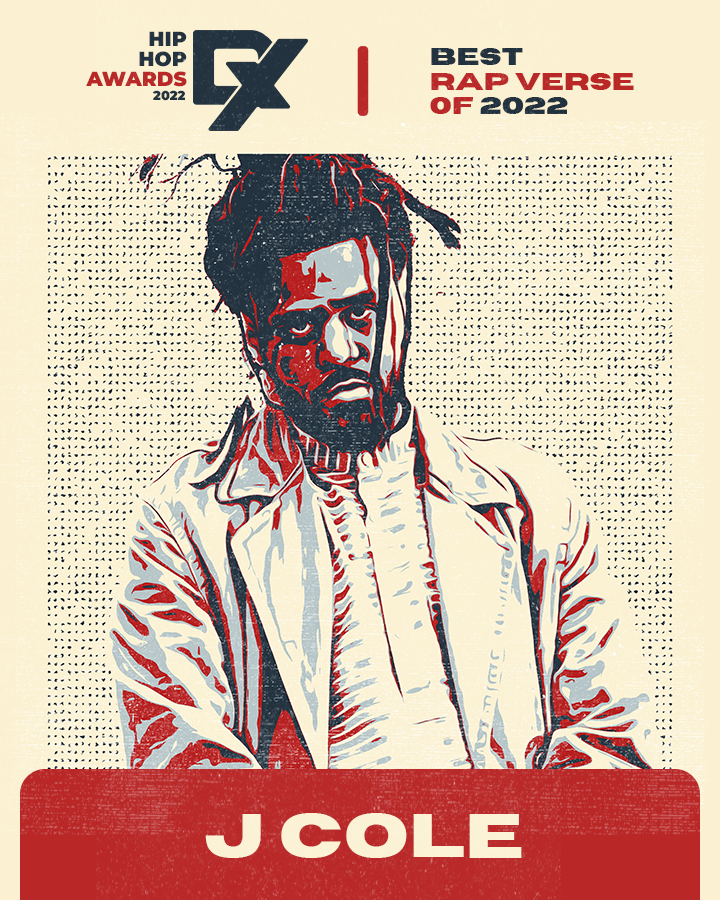 J. Cole has cemented himself as one of this generation’s Hip Hop greats alongside his rhyming counterparts Drake and Kendrick Lamar. So when word got out that Cole would be linking up with Benny The Butcher on the latter’s Tana Talk 4, fans were expecting a lyrical assault from both parties. What J. Cole did to The Alchemist-produced beat should be considered a crime. The Dreamville boss paints a vivid picture with a verse that captures the rapper flexing his status. “Of course I’m tryin’ to revive a sport that’s dyin’ / But the guns and the drug bars that y’all rely on / Got these nerds thinkin’ that you n-ggas hard as I am / But that just mean I ain’t as comfortable as y’all with lyin.’” He bounces between his earth-shattering birth to calling himself the best rapper, dead or alive. Even God himself isn’t spared from Cole’s wrath. “N-gga want me on a song, he gon’ see the wrath of the reaper / I’m prolly gon’ go to Hell if Jesus ask for a feature.” Cole world. 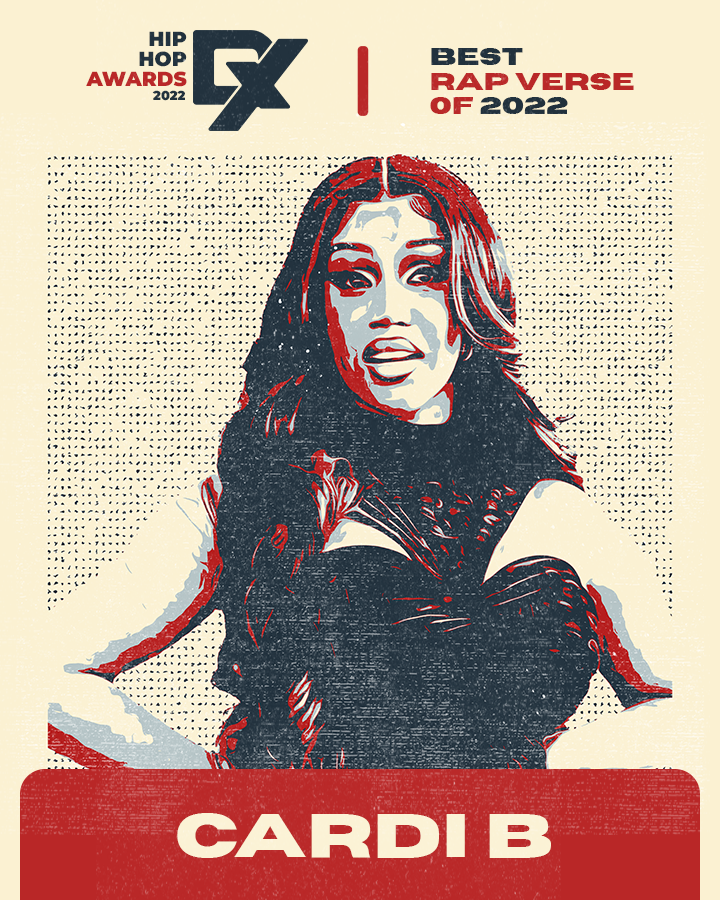 In April 2017, Cardi B donned a red wig, linked up with her neighborhood friends and dropped one of her hardest songs in “Red Barz.” The song grabbed many people’s attention with how Cardi annihilated the booming production by AraabMuzik, and opened the door for her to make her introduction. Fast forward five years and the leader of the Bardi Gang went back to her roots for her show-stealing verse on Kay Flock’s “Shake It,” which also features Dougie B and Bory300. The verse was first teased with a video of Cardi hanging out in The Bronx with a red paisley-patterned wig that caused fans to lose their minds and she delivered more than what fans expected. Cardi opens her verse with a bold declaration that she’s matching the energy of her opposition and wastes no time detailing how she plans to deal with her enemies. “I pull up to your window like drive-thru / Come get showered with bullets, no bridal / Put a tag on your head, I could buy you / Like, huh? like, what? / None of these bitches is tough / I’m with the shits and it give me a rush.” It’s been quite some time since Cardi B tapped into her vicious “Red Barz” vibe, but it was well worth it for fans who had been waiting for the “WAP” rapper to bar up. “All of my opps get mixed with the grabba / Broke bitch said she was gon’ touch me (Like, what?) / She lyin’, hakuna matata / All the bros know I’m uppin’, I’ll boom for ’em (Boom) / All the opps hope heaven got room for ’em.” Bardi is back with a vengeance.

Return to our Hip Hop Awards nomination page for more categories or check out the nominees for best Hip Hop album, best rappers and biggest comeback of 2022.

Check out our previous Rap Verse of the Year award winners.