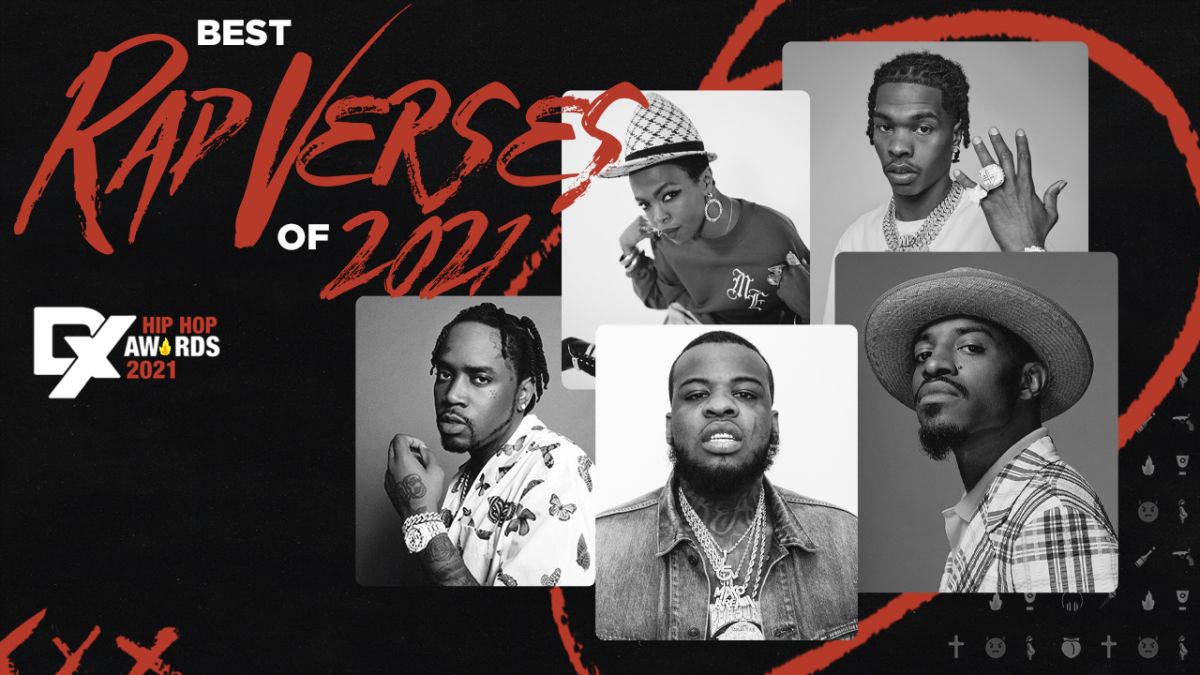 The contemporary rap genre’s most noteworthy elements are the high-profile gimmicks, wild public personas and beats that have largely outpaced lyrical content. But for a small section of literary-minded rap fans, one thing will always come first: bars. The best rap verses reign supreme over everything else.

While sifting through uninspired raps to find the scorching poetry we know and love has become a taller order as the years pass, 2021 saw some of the best bar architects show up and show out. Elusive legends and heavy hitting up-and-comers dug deep and produced verses that can stand shoulder to shoulder with the legendary stanzas of old.

This year, Andre 3000 made us tear up while speaking about the loss of his mother, Lauryn Hill provided a rare verse to hold fans over, Lil Baby and Fivio Foreign stole the show on Drake and Kanye’s songs respectively, and Maxo Kream continued to prove that he is one of the best storytellers in Hip Hop. Here are HipHopDX’s best best rap verses of 2021.

Andre 3000 is rap’s white whale, ever sought and rarely sighted. When he does grace us with a verse, it is invariably awe inspiring. In his most philosophically dense verse of the last decade, 3 Stacks pleads with the deceased Miss Donda to ask his own passed parents questions that have troubled him for quite some time. It’s a heartbreaking rumination on life, death, the passage of time and if indeed there is an afterlife. Andre handles all the topics with grace and wit as fans would expect, yet somehow exceeds expectations. He begins by wondering why, if there is a heaven, his mother wouldn’t be allowed to talk to him. He delves into his family history, creating 3-dimensional scenes with flippant ease, and then asks Miss Donda why his parents were never married, using his aged wisdom to reason into their lives, seeing his parents for the imperfect young people they were. Maturity and brilliance radiate from every line, and the poetic nature of the verse leaves its sentiment ringing in the listener’s ears long after the track comes to a close. If you’re willing to slog through almost three full minutes of Nas being aggressively lame (he mansplains baguettes and calls his own song “rather esoteric”), you’ll be rewarded with a top notch verse by a war ready Ms. Lauryn Hill. Filled with quotables and latent rage, her verse proves that not all goats are equal, and that the fire that burns within her will likely never go out. This verse is so many things melded into one. It’s an explanation (without an apology) of her extended sabbatical, a public address, a philosophical dossier and, above all, a master class in how to float over tracks like war ships on the Pacific. When the Goddess MC delivers the final of her 34 bars, the only thought left is: she’s still got it.

“OFF THE GRID” – FIVIO FOREIGN A Kanye West song featuring Fivio Foreign and Playboi Carti feels like a fever dream sprung from the deranged mind of a bape-wearing 12 year old Carti stan. The fact that this track even exists is a testament to the limitless malleability of the rap genre, and the fact it absolutely bangs is a testament to Fivio Foreign, who brings down a sledgehammer of a verse over one of the best Kanye West beats of the last half decade. Based on what he’s done in the past, this verse is Fivio punching far above his weight class and pulling off a miracle, like Connor McGregor fighting a 1985 Mike Tyson, and beating him into the mat in the first round. He does what few rappers have ever been able to do, and completely restructures how people think of him through sheer bars. Whether he’s acknowledging the demons in dark liquor, bragging about his new building’s amenities or shouting out supporters who wrote him in prison, Fivio stuns the world on the biggest stage of the year. It’s one of the best rap verses of the year no contest. As a lyricist, Maxo Kream is a stark realist. But never has he stayed closer to the action (and farther away from flowery language) than on the formidable “TRIPS.” In one long verse, Maxo recounts, in excruciating detail, the murder of his brother, Money Du. The pain in Maxo’s voice comes through in crystal clear render, grabbing the listener and pulling them headfirst into the tragic scene with him, his brother, and a mutual named Ike. On such a heavy song, one might expect Maxo to lay the trauma on as thick as he possibly can, vis-à-vis “Meet Again” or “Brenda.” But, he doesn’t. Instead, he simply faithfully recalls what happened. It plays like an un-doctored video of the events, and through this technique, Maxo is infinitely effective. We feel the shock of seeing Ike lean the bloody Money Du against the couch, the anxiety of waiting over half an hour for the paramedics to arrive, and finally the crushing pain when he succumbs. It is difficult, painful and ultimately, a beautiful tribute. It’s one of the most tragic but best rap verses of the year. Rest in peace, Money Du. On March 5th, shortly following the release of Scary Hours 2, Toronto police confirmed that Drake had been brutally murdered on his own shit. In what has become the Drake haters’ favorite Drake song, Lil Baby unleashes a nuclear bomb of a verse. The first half of his verse plays like a warm up. And then on the 14th bar, we see sir Baby breathe for the very last time. He get possessed by the spirit of rap music itself, and simply tears through the beat like a 1000 degree knife. What he’s saying doesn’t matter nearly as much as how he says it, and each syllable is entrancing. When the onslaught is complete, the listener might find that they too were holding their breath.

With new flows popping up left and right, Kendrick gifts his cousin Baby Keem with one of the most eclectic verses in his storied career. He takes a long, smooth drag of our top five, torches all the music we’ve been listening to, and reiterates how little he’s worried about any rapper coming for his throne. If “Control” was a warning shot from the frontlines, “Family Ties” is Kendrick pushing the big red button and watching the chaos from his lazy boy chair without a care in the world. We could have nominated it for best rap verses but this song doesn’t need to be in every category.

I mean, Tunechi said “I leave ‘em six feet deep, I’m being socially distant.” What are we supposed to do? Not give him a mention? In all seriousness though, this is vintage Lil Wayne: Young Money to the death of us.

In this 10 minute, 2000+ word verse, Dave constructs and dissects a complex view of modern life in London. It’s a startling achievement, and more startling is how Dave continues to clear the sky high bar he set for himself as a teenager. It’s easily one of the best rap verses from the UK.