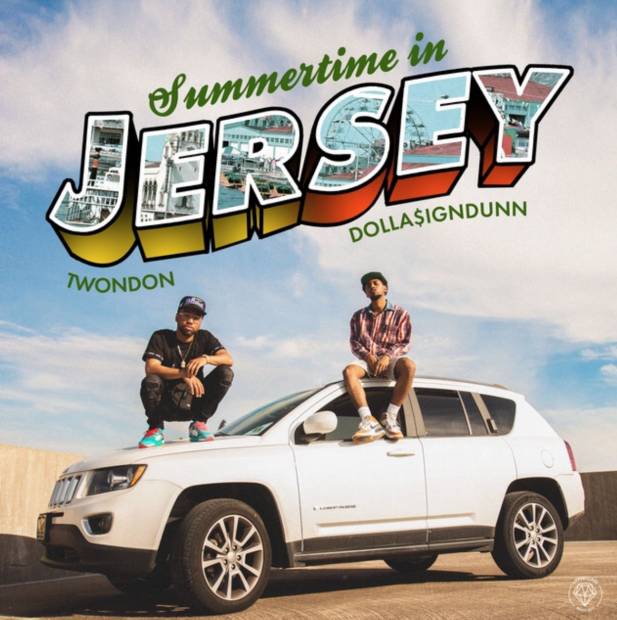 On the East Coast, where there are more defined seasons, there is truly nothing more magical than summer. New Jersey rappers Twondon and Dolla $ign Dunn attempt to capture that feeling with their aptly titled Summertime In Jersey — an easily digestible, nine-song album slice on indie fire.

Hot on the heels of Dolla$ignDunn’s debut release Sign Language (which turns a year old on July 30), and Twon’s most recent release Sorry 2 Bother U, the longtime friends display collaborative pen game that sounds seasoned and poised.

The project begins with Twondon walking to his car and getting a phone call — to which he replies he’ll be there in 20 minutes. The exact length of the album, it sets the project up as the theme to making moves to a destination on a summer evening. Living true to the name, the beats (by Onetime, Big Boy Tracks, Donato, Dilly Got It Bumpin and Canis Major) and even the mastering and artwork are all done by Jersey artists, with no exceptions.

Twon and Dolla $ign trade intricate bars loaded with motivational prose and celebratory reflection on standouts like the laidback (almost southern) vibe of Benz Coupe and slightly 90s tinged Barry Bonds. Without getting too far out of pocket, they manage to make the tracklist have an admirable amount of sonic variation. “Million Dollar Flow” (a nod to his highly acclaimed “Million Dollar Babies” single) has a more contemporary bounce, as does the flame emoji “Wings,” which fits Dolla $ign Dunn’s flow like a glove.

Broken up with radio skits, Summertime In Jersey feels like a surprisingly enjoyable commercial-free mix you happen to stumble upon when cruising the radio dial for something to listen to.

While there isn’t necessarily a clear-cut hit record among the concise tracklisting, and at times the duo can sound slightly disjointed in their bars — like on “Million Dollar Flow,” which sounds less cohesive than the other tracks — they do share strong unspoken chemistry. It makes any inconsistencies, like the closer “No Sweat” (which is a bit thematically confusing), seem like it’s just part of the show.

For fans of UpperClass, which has seen significant success with their merch over the last few years, this is a welcomed addition to the imprint’s catalog. For those new to this duo, it’s a beautiful introduction to their top-tier, truly independent brand of Hip Hop. It is highly recommended theme music for your Tri-State heatwave movements.