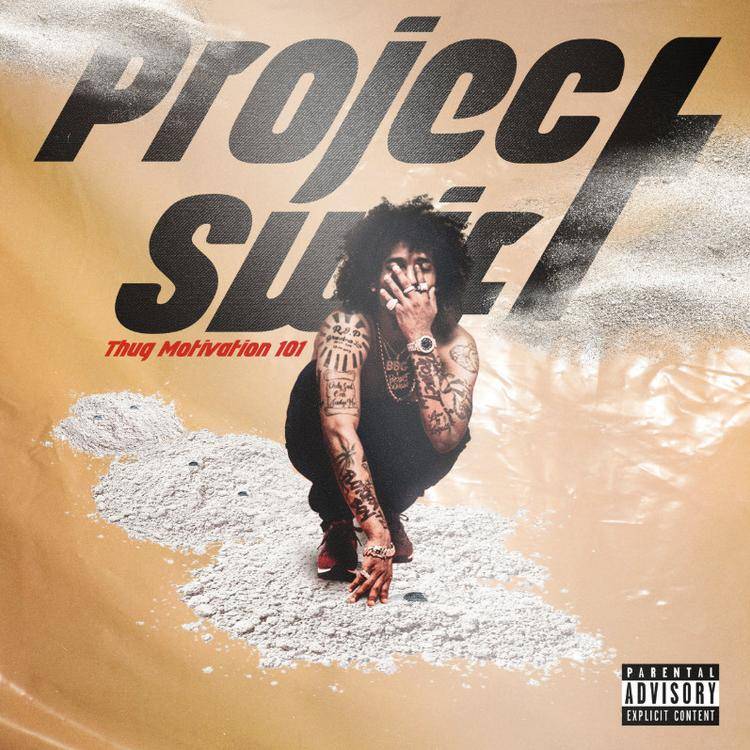 Every rapper goes through his or her share of adversity, and St. Petersburg, FL native Project Youngin is no exception. In his case, an aborted NBA career, an unfortunate tragedy that claimed the life of his brother, and the struggle of living in constant economic anxiety all contributed to his unique, yet trendy, sound. And with Project Swift, the rising artist shows he’s ready to take on all contenders for the crown.

The cover art is your standard neo-trap fare — the handsome young’un standing in a pile of cocaine, arms coated with tattoos, face covered by one long, bejeweled hand — and doesn’t quite make sense in the context of the album content. Project Youngin manages to convey his message in less than 30 minutes and is successful, overall, with his efforts. Tight production values, rapid-fire bars, and melodic beats come together in the perfect confluence of sound, and it’s a rare treat to have this level of intelligent delivery from such a young rapper.

The first song, “From the Bottom,” casts the dye for the rest of the album. It kicks off with a ringing phone and Youngin, presumably, talking briefly to one of his homeboys before he launches into the machine gun-like lyrics: “I gotta watch my back, I’m too important/These bitches tryna kiss me when they meet me/Bitch, you trippin’/You’d think I’m working up at Popeye’s, the way I’m serving all these chickens.” He’s certainly clever with the wordplay, and one wouldn’t be faulted for rewinding the track a few times to make sure they really understood both what he was saying and the nuance and depth of how he was saying it.

Project Swift is one that’s carried, mostly, by its auteur, and it works just fine. However, on a few tracks, Youngin doesn’t hesitate to call in for reinforcements. And while the appearance of T.K. and Ann Marie on “On My Way” are very standard — Youngin is the far superior emcee — he’s met his lyrical and rhythmic match with Quando Rondo, with whom he trades bars on the album’s first single, “No Time.” The duo have an obvious and absolute blast with trading lyrics like “Bitch, I’m on the ground/A brother ain’t got no time to be wastin’/I’m tryna make it,” and “These niggas weren’t grindin’ when I was grindin’/Now they see me shinin’/They think I’m dimin’.”

I wanna say thank you to everybody who played a part in this album! I especially wanna thank all my fans trust me u won’t be disappointed ❤️ and Thank you @djswift_813 for believing in me 🤧🖤 #FreeChauncey

By no means is this project perfect, however. Much of the irritation about the album, however, comes from the ridiculous publicity stunts that Project Youngin pulled to promote his music. We’ll recall that, just a few months ago, he faked his own death by gunfire to promote his “Thug Souljas” video. While this may have been a clever marketing stunt in the early aughts, this is hardly a good idea in this era of the omnipresent school shooting (and unfortunate death-by-suicide rising trend).

With that said, one can hopefully chalk that up to the arrogance and ignorance of youth. Project Youngin is certainly a talented rapper, and if he plays his cards right — if he chooses to focus less on the ridiculous stunts and more on the music — he could have a long and storied career in Hip Hop.