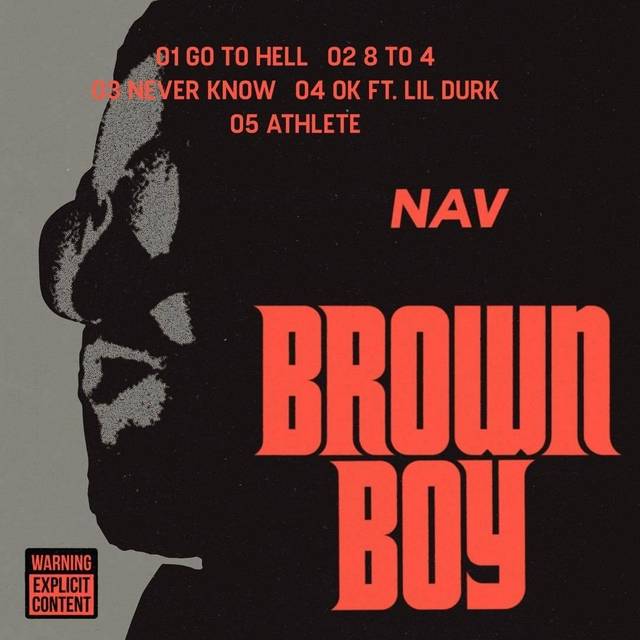 It would be unfair to say that NAV isn’t a talented hitmaker and producer (co-scoring Drake’s “Back To Back” was an undeniable classic moment). But the Canadian croon-rapper is truly the epitome of millennial rap game come up. In late 2016 he scored a promotional one-two punch any newcomer would die for; a slapping placement on Travis Scott’s 2nd album and his own song featured on Kylie Jenner’s SnapChat.

But he also isn’t breaking new ground with his simple rhymes, bouncy beats and catchy hooks as there are currently a million artists online trying desperately to pull off this sing-song-rap-croon Auto-Tune formula.

But NAV is improving project by project to the point where his most recent hit “Champion” with Scott has a chorus likely branded into the medial lobe of listeners’ brains. His Brown Boy EP is another step in that right direction.

With that said, the EP isn’t so much a sneak preview for what is to come on his upcoming full-length LP but more like a few loosies that won’t make the final tracklist. NAV’s manager simply tweeted that he was tired of hunting for NAV’s hard drive and decided to put out some songs he found on his phone. The random collection of songs manage to fall into the same thematic bucket NAV has been pouring his drip into since he started rapping.

The 15-minute flex is aimed at anyone who has ever even thought of doubting the Toronto native. Opening track “Go To Hell” is fairly self-explanatory, as NAV wishes hell on anyone who quite literally didn’t let him in nightclubs last year and “8 to 4” carries the same triumphant tones as NAV claims he will never go broke or work a lousy day job because his music career is a slam dunk.

Speaking of slam dunks, NAV actually gets off some witty wordplay on “Athlete” as he fills up the entire song with mildly clever sports references that include “Callin’ plays like Kobe, let my broski set the pick/I got ice like hockey, when I skate I keep my stick.” While no one will mistake NAV for being “the new Nas” with such bars, it’s definitely a visible upgrade in lyrical attempt and consequent ability. “Never Know” also bodes well for NAV’s growth as a writer, while keeping the same hoppy catchiness, he raps about life’s overwhelming uncertainty (“Drugs, money, music, the life I chose/When it’s gon’ end, I’ll never know”) making for some of his deepest music to date.

However, “Ok” featuring Lil Durk, sounds remarkably similar to other collab tracks NAV has put out, it renders itself a skip.

Brown Boy EP is a fun, semi-satisfying appetizer for his album due out at the end of the month. Even without a ton of rhyme or reason to this five-song release, the tracks should prove to be a sturdy ally to his recently released Bad Habits album.