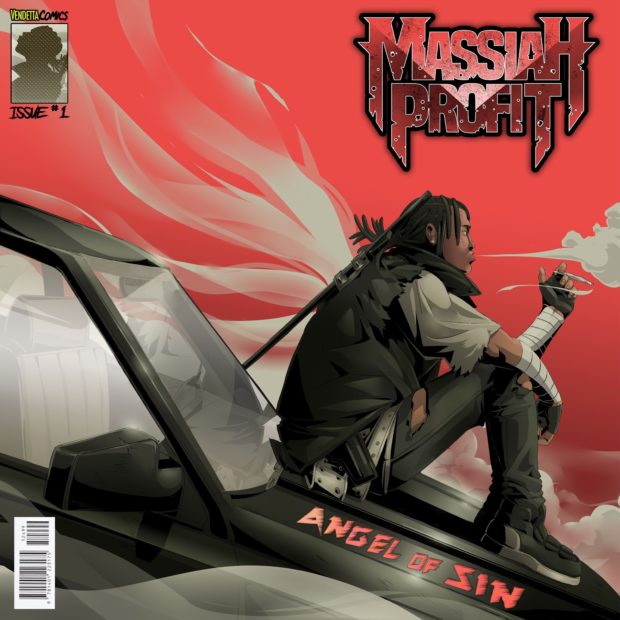 With the runaway successes of the Black Panther and Spider-Man: Into the Spider-Verse soundtracks, one thing is abundantly clear: Hip Hop is a great companion piece to superhero stories. Vancouver rapper Massiah’s EP Massiah Profit: Angel of Sin comes with an online comic book telling a post-apocalyptic tale of a teenage vigilante navigating the streets of San Vida in 2091. While the visuals are beautifully rendered and rich with mood, the music is cinematic and sonically compelling.

The EP starts with “91,” a hypnotic track which serves as an introduction to the vigilante’s journey through San Vida. Massiah (formerly known as KAi Sky Walker) conjures nostalgia for Golden age Hip Hop through references to Public Enemy, 2Pac, and Ice Cube. According to the graphic novel, the song is about the vigilante engaged in a police chase, riding down gloomy streets and alleyways.

Despite all the early 1990s references, Massiah has a distinctly contemporary sound. Across the four tracks, there’s a heavy Birds in the Trap Sing McKnight-era Travis Scott influence. “Holy Smoke” has similarities to La Flame’s banger “outside.” But ultimately, the Vancouver artist carves out his own lane with his lyricism and inventive flow. Over SQDRN’s gorgeous mid-tempo beat, Massiah tackles the themes of spirituality and existential dread. He peppers in some biblical references with the lines: “Holy Smoke, I got holy smoke/ Keep a rollie close. Breathe a holy ghost/ Cross a burning bush, ask me what I chose?” The track is standout of the EP, showcasing his range as his delivery jumps from solemn to melodic.

On the chilling “Generation Lost,” the Vancouver rapper illustrates the “world full of angels and drug runners” that is San Vida. He underscores the vigilante’s defiance with the verse: “Public enemy, militant fatigue/ Malcolm energy, negro infantry/ Equilibrium, high efficiency/ Thought you injure me?” Like most dystopian tales, San Vida is an amplified reflection of contemporary society’s woes. The comic book panels depict scenes of urban decay — sex workers cackling, drug dealers hustling, and children playing with a fire hydrant.

The EP’s closing track “Cup of Pain” is a dreary conclusion to the vigilante’s journey. Rapping over Brevner’s somber, layered production, Massiah gets contemplative about his demons. In the companion-piece comic book, the vigilante is in the throes of a dramatic, violent shoot-out with the police which tragically ends with the death of a little girl. The song’s outro evaporates into the pouring rain, underscoring the sense of pervading gloom.

#ANGELofSIN BACK COVER ??? || IT'S ALMOST TIME! make sure you read the synopsis, get familiar and go deeper into the story of vigilante superhero @massiahprofit ?️?️?️☠️☠️☠️??? || Scene1: 91 [prod SQDRN] Scene2: Holy Smoke [SQDRN] Scene3: Generation Lost [SQDRN] Scene4: Cup of Pain [prod @brevner] || FEB 12 ??? SYNOPSIS: In the year 2091, As humankind arrives yet again at the precipice of self destruction – sacrificing compassion & humanity for innovation & convenience – an anti-hero emerges to balance the scales. MASSIAH PROFIT, a teenage vigilante, provides protection and justice for the lost and forgotten. Born in Sin Vida – a post-apocalyptic concrete jungle – Massiah was destined for a life of slavery or crime. By a miracle, he was delivered to City of God – the massive Utopian metropolis adjacent to SinVida – and adopted by elite Angels. Raised within the Glass – City of God's protective border – the boy was afforded world-class education & training. His mental & physical development was astonishing. Unknown energy gave him a distinct advantage over the Angel children. His clear uniqueness & power created inner conflict & mystery, until a message from the Heavens led a teenage MASSIAH back to his birthplace. Upon his return to SinVida, he was immediately faced with the realization that City of God & it's Angels only bask in glory & light because of the darkness that they cast over the Sins. Enslaving & Oppressing them just to provide power and servitude to their glorious City. Leaving the rest to survive with nothing. A long-hidden truth revealed is enough to birth a lifelong vendetta. A boy's innocence taken swiftly may spark a burning desire for vengeance. To protect those left in the dark, one must first come from darkness. That one is MASSIAH PROFIT, #ANGELofSIN _________________ #massiahprofit #angelofsin #comingsoon #blacksuperhero #comicstrip #musicartist #postapocalyptic #blackanime #sinvida #comicbookart #afropunk #blerd #blackmanga #vancityhype #animefans #mangaka #comiccollector #rapgod #mangaedit #vancitybuzz #comicbookfan #mangas #cartoonart #vigilante #massiah #marvel #blackpanther #afrosamurai #blackhistorymonth #bhm

What’s missing from this tale is a sense of catharsis. Perhaps on his next installment, Massiah will offer some light and add more texture to the vigilante’s narrative and world of San Vida. But for now, Massiah Profit: Angel of Sin is a fantastic glimpse into an emerging artist’s potential.