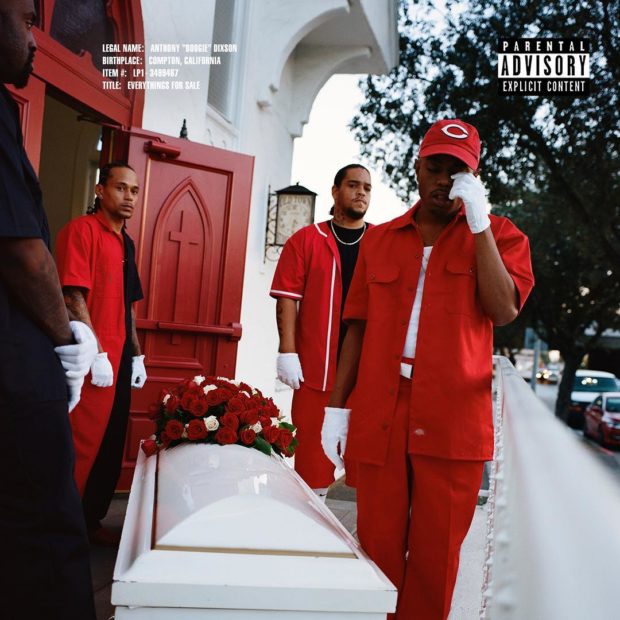 Coming straight outta Compton is a Shady one named Boogie. The Shady Records signee dropped his long-awaited debut, Everything’s For Sale, Friday, and the album is worth fans’ patience.

The full-length fully introduces the world into a troubled young man with a brilliant mind whose musings are starkly engaging.

Boogie pulls no punches in being honest about his feelings. Despite Hip Hop still being largely macho, mental health awareness is at an all-time high. Nevertheless, Boogie sounds defiant in his reflections, so much so that one could picture him rapping about suicide back in 1996 during prime testosterone-driven vitriol.

Regardless, his rhymes about self-disdain. will drop jaws: “I’m the one in front of the gun and the one behind the trigger/I been hidin’ from my truths, they will never find a nigga/If they ever find a nigga, I identify the killer/I’ma be the only witness, it’s that pussy in the mirror.”

At the same time, Boogie laments his circumstances: “It’s hard to feel shit when you livin’ off pain pills/Hard to put on war boots when you walkin’ on eggshells.” There’s self-hatred here, but also the frustration that can only come from at least a little bit of self-compassion. Boogie’s ability to allow the two to coexist without feeling the need to explain the duality enriches Everything’s For Sale with a widely relatable complexity.

Boogie has a remarkable penchant for melody that marks this album with a vibe both catchy and moody. “Swap Meet” is accompanied by Ryan Feinberg and Keyel’s hauntingly melancholic guitar strums, but Boogie remains the star of the show as he smoothly compares a worthy lover to a swap meet. The premise may sound ridiculous, but Boogie’s flawless execution makes it worthy of repeat spins.

The vibe is briefly altered on the Eminem-assisted “Rainy Days.” Marshall opens his verse with his trademark anger, but his deliberate flow is a welcome change of pace to the speed-rap he’s stuck to like glue over the past few years. Alas, he gives way to his rappity-rap shtick midway through the verse, unintentionally distracting from his verbal gymnastics as he does Fresh Ayr, STREETRUNNER and S1’s dark beat a disservice with his hyperactive flow. It’s a sign of the times when a 2019 Eminem feature actually detracts from a song.

Everything’s For Sale is not entirely downbeat. “Skydive” finds Boogie daring to take a leap of faith despite the uncertainty that many of his generation feels. He also gets satirical of the state of rap on “Self Destruction” with an intentionally nonsensical hook: “It go somethin’, somethin’, somethin’, can’t remember nothin’/Still don’t give no fucks when wildin’ out in public…” The cut is smart in its roasting of wack rappers but also detracts from the album’s focus on raw emotion.

If any affirmation is needed of Boogie’s concern for his future, it can be found on “Lolsmh (Interlude).” This is not a young man who is angry because he doesn’t care. Quite the contrary. His Psalms-like cries out to God betray a man who wants nothing more than the ever-elusive balance of success and peace. Yet, his faith keeps him grounded as he knows he’ll be all right in the end. “Remind me that I’m gonna be straight/Remind me if my heart do break, remind me that it’s gon’ reshape.”

Whoever said the youth don’t care has never listened to Boogie. The young MC’s naked honesty is built for a cult following from young fans who are sick of mumble rap and older fans who want something fresh.