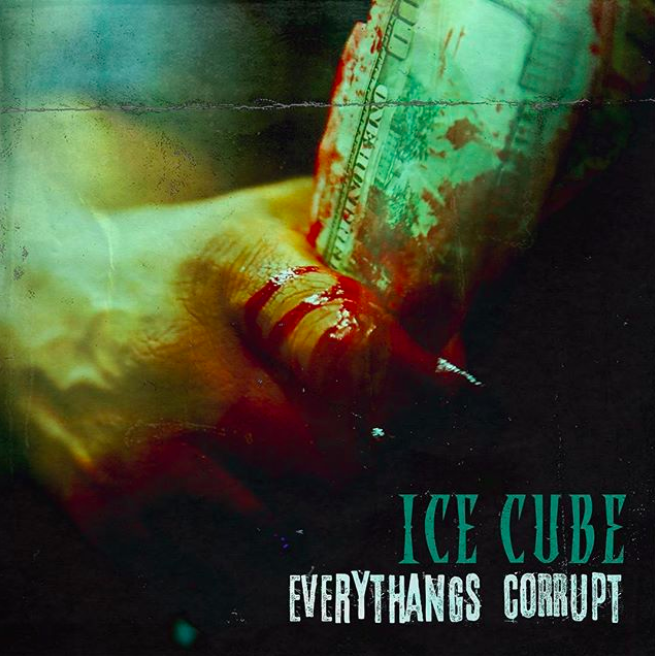 Over the course of Ice Cube’s storied career, the N.W.A legend has become like the Energizer Bunny of West Coast gangsta rap — he keeps going even when you kind of forget about his music.

From his BIG3 basketball league to his ever-evolving IMDb page, Cube has proven his staying power is stronger than Gorilla Glue.

On his long-awaited 10th solo album, Everythangs Corrupt, Cube explodes out the gate with “Arrest The President,” an unabashed lyrical assault aimed at Donald Trump and the corruption currently swallowing the White House. The sense of urgency he demonstrates carries into “Chase Down The Bully,” which finds Cube blasting the tiki torch-wielding members of the alt-right who he describes as “Walking Dead muthafuckas.”

The unbridled aggression Cube harnessed for both aforementioned tracks peppers the majority of the project but also eludes him on a good chunk of it.

There are a few cuts that simply serve as filler and nothing more. The off-tempo “Fire Water” should’ve been doused with gasoline and lit with a match before making it on the album. It temporarily derails Cube’s domineering sociopolitical rampage and puts that skip button to use. Fortunately, it’s followed up by the Marvin Gaye vibe of “Street Shed Tears,” which comes with a gorgeous hook courtesy of Shameia Crawford.

Another undeniable highlight, “Ain’t No Haters” featuring Too $hort, serves as the obligatory “we made it” cut and finds both tenured MCs celebrating their successes. Although it wouldn’t serve Cube to relive his gang banging days — simply because that’s not his life anymore — lines like “All I got is maids and waiters” straddle the line between corny and matter-of-fact. But coupled with the song’s laid back vibe, the lyrics quickly take a back seat.

When they do hop back up front, Cube doesn’t miss an opportunity to drop off a life lesson. From his “respect your elders” directive on “Can You Dig It” to the D.A.R.E. message he screams from “Bad Dope,” Cube’s maturity shines through.

Similarly, “On Them Pills” explores the zombification of the masses due to prescription drugs use. While his attention to the issue itself is commendable, Cube slightly misses the mark by blaming the addict rather than addiction itself.

“Uh, you’s a drugstore cowboy/Everything you put in your mouth look like a Altoid/Crazy ass niggas love a bitch named Molly (bitch named Molly)/Passed out on the floor, go and get a dolly/I saw your boy-boy in the street butt naked/Wormin’ up and down 122nd/His momma tried to stop him and those youngers had to mob ’em/So cops tried to pop ’em but them bullets couldn’t drop ’em,” he spits.

While those are astute observations and absolutely come with the territory, Cube fails to recognize the power of addiction and how it can completely unravel people’s lives until they’re hallow shells of their former selves.

Overall, the 16-track project is mostly cohesive aside from the few disposable tracks that clutter its message and, at times, elementary lyrics. Those hoping for another AmeriKKKa’s Most Wanted or Death Certificate will be sorely disappointed. “That New Funkadelic” allows Cube to return to his G-Funk roots but is the closest he gets to vintage Cube.

If anything, Cube’s concept for the album proves his heart is in the right place and boldly illustrates, yes, “everythangs corrupt.”