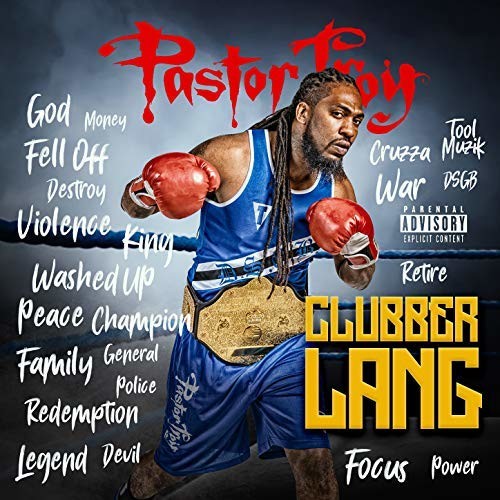 If you were to ask the average rap fan to name of the more popular MC’s of Southern Hip Hop, the name Pastor Troy won’t usually come up. Perhaps it’s because he came out during a time when the Kings of Crunk — namely, Lil Jon, Killer Mike, Chamillionaire, and the like — were overpowering the charts and becoming the definitive sound of the Dirty South.

As a result, the street preacher born Micah LeVar Troy didn’t get the same level of mainstream success that his infamous contemporaries did, in their prime.

That said, The Pastor is nothing if not a fighter, and he consistently puts out good music when the mood strikes him.

Enter the Clubber Lang EP, released after his previously-announced but short-lived retirement, which is an impressive 24-track offering that the PT Cruiser put out a few weeks ago. The first single off the album, “Heavyweight Champ,” was filmed at the Mercedes-Benz Stadium and borrowed more than a few themes from the hit boxing movie, Creed, starring Michael B. Jordan.

The other songs are just as hard-scrabble and indicative of a man who’s perpetually ready for war. There’s a virtual who’s who of Hip Hop superstars making guest appearances on the album — Twista, for example, gives his rapid-fire rhymes on the ninth track, “Who Gettin’ High.” Rapper K.B. makes an appearance on two tracks — “Work Boots” and “Holdin’ Your Nuts on Me” — and Pleasure P, Slim of 112, and Pimpin’ Ken and King Ellis all do their thing, too.

Pastor Troy, though, is at his best when he’s simply left to go all the way the fuck off by his lonesome. This is best exhibited by the track, “Smiling Faces,” which samples the classic 1971 track “Smiling Faces Sometimes” by The Undisputed Truth. And, like the classic track, Pastor Troy spits about backstabbers and fake friends with “now, let me tell you ’bout your homeboy/that say he ya shooter/always tell ya he love ya/wouldn’t do nothin’ to ya/he had some words with a nigga/spilled into the parking lot/and now there’s three niggas shot, and the shooter with the cop. And now he’s pointin’ the finger…”

Perhaps the worst that can be said about Pastor Troy is that he’s a bit too profane at times. Hip Hop isn’t church-going music, certainly, and no one thinks the PT Cruiser got his name from his time at the pulpit (though his father was a pastor, and the rapper’s studio name is a tribute to the elder Troy). But really, not every other word out of one’s mouth has to involve some permutation of muthafucka, fuckin’ your mother, or your mother fuckin’ somebody. The word “muthafucka” is most effective when it’s used as a seasoning, not the whole meal.

And “Out of Touch,” which samples the classic Hall & Oates song of the same name, starts out as a tribute to a dead homeboy and an encouragement to stay in touch with your friends before something bad happens, but it’s poorly mixed and uneven, sonically, in a lot of places.

Overall, none of the themes on the album are new ones for the good Pastor, but he raps about what he knows, and as such, he’s able to paint a vivid picture of a rough life in the Dirty South. Pastor Troy fancies himself a bit of a crunk Shakespeare, and it’s an accurate description of this woefully underrated rapper.