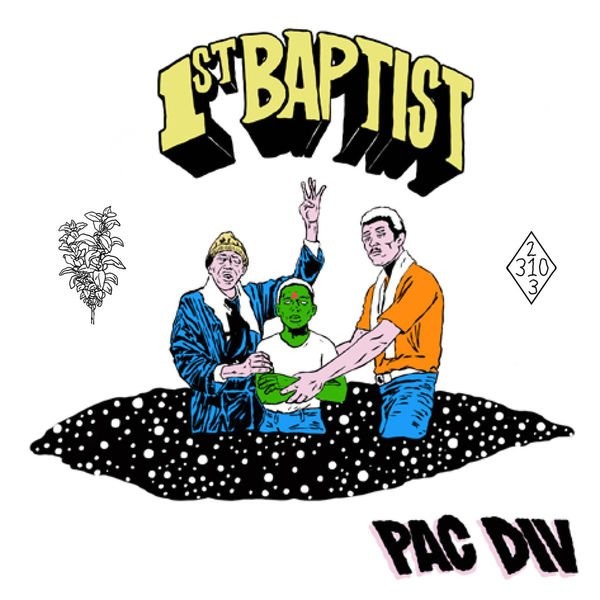 Of the many artists able to bypass record label politics, during the Hip Hop Blog Era, Pacific Division earned visibility through their custom brand of West Coast rap that was as fun as Tha Alkaholiks (without the drunken debauchery) and as lyrically diverse as past foundation pavers (think Def Squad). The trio consisting of MCs BeYoung, Mibbs, and Like (who also doubled as a producer) shortened their dub to Pac Div and enjoyed a successful run of LPs, and a stint at Motown Universal before hanging up their collective jerseys to focus on solo projects.

Now, six years separated from their sophomore release, the three-man squad are back to collect their dues with their 1st Baptist album.

Avoiding the cheap tactic of countless filler songs for padded streaming stats, Pac Div keeps their third album numerically concise with 10 records. Four of them are produced by Like with the rest handled by DJ Dahi, Esta, Huss, James Rogers, and Swiff D. Off rip, the tempo that they’ve set on 1st Baptist is much slower than previous projects. It seems like a deliberate move to focus more on the songwriting and concepts instead of only raw bars. And while some proof of that exists on certain tracks like “Time Will Tell” where BeYoung’s verse follows Like’s without a hook separating them, they don’t venture enough into a clear creative territory to impress quite yet.

The opening track “Players of the Year” is the closest you’ll get to a familiar Pac Div, chock full of sports references and Mibbs setting the scene for their new foray: “Back to the basement/Back to the holey ass couch and the dirt weed stuffed in the mason.” From there, the tracks fall in line without rhyme or reason, touching on various cliché topics of being played by a girl (“Hate to Love It”) to keeping a tight group of friends (“Circle”). Overall, the lyrics fall short of previous efforts. But you can’t deny clever lines like, “That pussy Gucci or it’s South Pole,” and, “We can wear matching sweatsuits/Trip to Magic Mountain with your nieces and your nephews.” Interestingly enough, they left their strongest track attached to the album, “First Baptist,” off the final lineup.

The rap landscape is significantly more colorful today than it was in 2011 when their debut album The DiV was released. To give you an idea, the biggest mainstream releases were Watch the Throne, Kendrick Lamar’s Section.80, and Drake’s Take Care while the more left-field albums were A$AP Rocky’s Live.Love.A$AP and Danny Brown’s XXX. Today, the lines between peripheral artists and mainstream have almost been entirely erased with Cardi B, Lil Skies, Youngboy Never Broke Again, and Rae Sremmurd commanding the youth’s every-changing attention spans. With that context in mind, it’s tough to make an argument that 1st Baptist will be remembered three months later. Yes, there are moments like “Gorgeous” where each member hits his stride with the production and “Apt 10” which remind you of the energy they used to bring on their mixtapes, but as an overall project, 1st Baptist is incomplete.

A source close to the group confirmed that the group has another album planned for this year so one can only hope that they’ve perfected the sermon for their follow-up service.