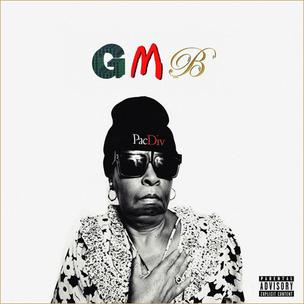 2011 was arguably a banner year for Pac Div, who not only dropped a refreshingly solid mixtape in Mania! but also finally released their debut album The DiV. Comparably, 2012 has been a relatively quiet year for the trio, liberating sparse records here and there while out on the road. With their latest effort GMB, Pac Div looks to propel their name to the forefront once again as a group that deserves mention with today’s greats.

Anchored by tracks like “The Return” and “Sneakerboxes,” Pac Div quickly establishes a lyrical rapport that fans have come to know and respect them for. Backed by head-bouncing drums and Ty Dolla $ign’s mellow vocals, the former record is a slice of West Coast radiance that channel’s a retro vibe, a testament to their roots. With Kurupt and DJ Battlecat in the passenger seat, “Fuck Ya’ll” is another winner, which focuses on a more intense brand of lyricism. This is balanced out by records like “Slow.” Featuring a Chuck Inglish chopped and screwed production, the crew likewise settles in with smooth rhymes that should gain them more female followers. Similar to The DiV, rarely do you hear a member coasting through a song, and when the opportunity arises to showcase their skills, they’re more than capable of delivering. Whether it’s BeYoung’s slick delivery on “Truth,” Like’s sharp penchant for the opposite sex on “Can’t Help It” or Mibb’s honesty (“We start out like tadpoles in momma’s tummy / And come out like assholes wanting money”), Pac Div fortify their technique here.

What inevitably holds GMB back is a lengthy track list that gives way to moments that feel more suitable for a mixtape. Such is the case with the repetitively-cheeky “Bank” and the burdening clash of verses on “Savages.” Granted, album highlight “Cross Trainers” shares a cypher-like vibe to the latter record. However, the guests and overall execution warrants this move. Detracting production found on “Debo” and “Black Acura” is something you’ll rarely find with Pac Div; it would be difficult for anyone to sound decent here for that matter. Also, it doesn’t help that Mac Miller comes through with a lethargic verse that goes absolutely nowhere. Despite its missteps, GMB is a commendable project that should hold over diehard fans. More so than anything else though, it’s proof that the independent route was the right choice for Pac Div.