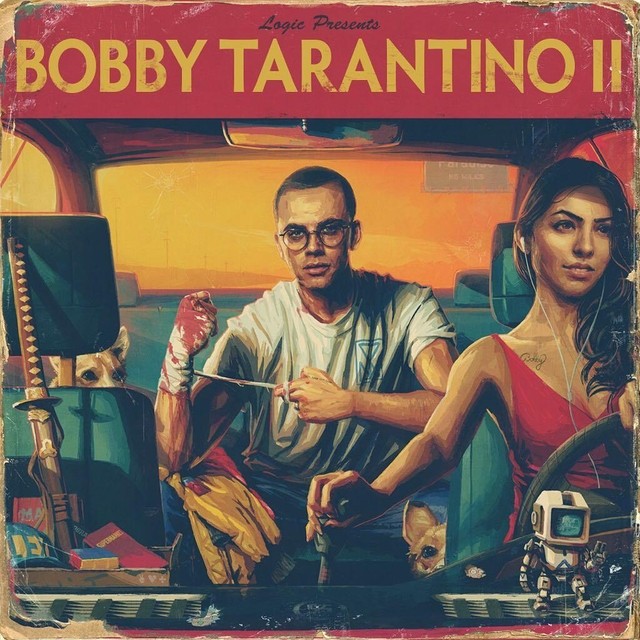 In 2017, seven years after dropping his debut LP, Logic’s career hit new highs with Billboard-topping endeavors in the suicide-prevention hit “1-800-273-8255” and Everybody — a studio album that explored socially conscious topics and experimented with gospel music to mixed results.

With Bobby Tarantino II, Logic’s typically verbose delivery sounds more relaxed and in his element as he returns to his aloof alter ego. Its biggest misfire, however, comes at the willingness to champion records that don’t mirror the status of his popularity or potential.

Bobby Tarantino II is introduced by a goofy Rick and Morty skit, a nod to Logic’s nerdy instincts. 6ix, his longtime producer, churns out breezy beats that allow for such a listening experience. “Overnight,” a charming banger, has Logic sing-songy rapping over light synth keys. Similarly, “Boomtrap Protocol” has a nonchalant vibe; against a soulful beat, the rapper paints an image of an intimate drive with his soon-to-be-ex-wife. These tracks are Logic at his best: not overdoing his lyrical “look-at-me” exhibitions.

Most of the mixtape’s guest appearances also compliment Logic’s newfound irreverence. Wiz Khalifa delivers one of his better verses in a while on “Indica Blue,” a stoner anthem that captures a lazy summer afternoon warmth. On “Yuck,” his attorney Paul Rothenberg and the legendary Elton John chime in for random monologues about Logic’s so-called awesomeness. And 2 Chainz showcases his ability to create genuine chemistry on “State of Emergency,” as they both take turns attacking their haters.

Despite the project’s strengths, Logic’s cockiness falls flat on the mixtape’s closing tracks “Everyday” and “44 More.” The highly Auto-Tuned “Everyday” demonstrates that despite claiming to back to his laid-back alter ego, he still fiends for cheap sentimentality. “44 More” is Logic tripping on his own ego as he brags about selling more albums on his opening week than Harry Styles and Katy Perry. This bravado only comes off as natural when its molded to his unique personality like on “State of Emergency,” where he comically proclaims, “I ain’t in the club throwin’ dollars, I’m at GameStop.”

Following up commercial success with another left turn could prove to be risky. However, Bobby Tarantino II suggests that Logic is still unsure about the direction and perception of his artistry. A recent interview with Nick Huff revealed the young vet admitting, “I don’t make music for Hip Hop, I make music for my fans” … making his place in rap’s current elite pool that much interesting.

As of now, he’s dabbling in both stoner lightheartedness and righteousness, an indicator he’s still figuring out what works best but with so much imminent success, there’s no immediate rush.