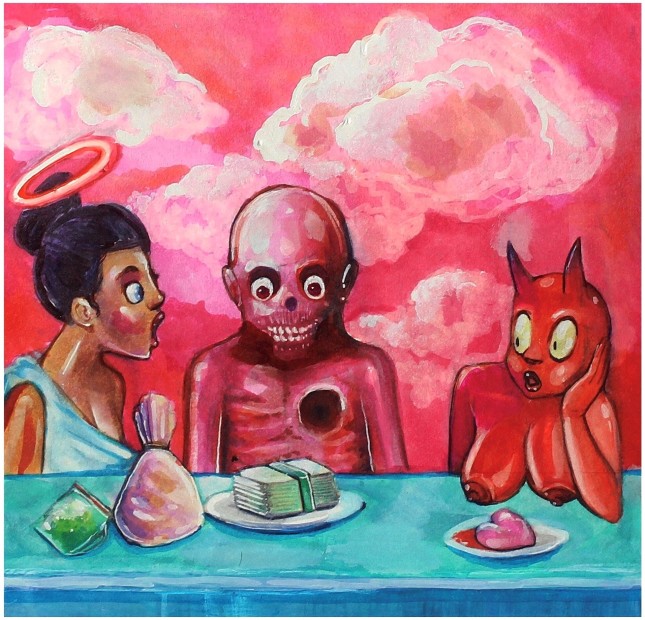 Stalley always sounded out of place as the blue-collar lyricist of the shiny-suited Maybach Music Group. Earlier this year he departed from Rick Ross’ label, freeing himself from creative restraints but also facing uncertainty. Not deterred by the independent hustle, the staunch no-nonsense rapper born Kyle Myricks has responded with embittered determination on Tell the Truth: Shame the Devil – Vol. 1.

Stalley’s Ohio-sized boulder on his shoulder is glaring from his opening declaration on “Solo” — “I don’t fuck with niggas, I’m ridin’ solo.” He carries that attitude on varying levels throughout the seven-track EP produced exclusively by Supah Mario. Given what he went through with MMG, it’s not only understandable but welcome to hear such aggression. “Going crazy from the madness/ Tryna appeal to the masses/ Artists nowadays is new slaves/ Tryna appeal to the masters,” he confesses of his Maybach days while admitting later in the verse that he grappled with suicidal thoughts.

Stalley’s willingness to vulnerably articulate his overwhelming stress helps to paint a complete portrait of his departure. It also makes his excitement at the prospect of artistic freedom — “Now the beast untamed, got that monkey off my back,” he rhymes on “Solo” — all the more relatable. Stalley delves deep into his soul, doing what more rappers should do by examining all emotions of their everyday struggles.

After the first two tracks, Stalley eases up his intensity. It would have been compelling to hear him angrily spit his way through the entire EP, and at just seven tracks, the shtick probably wouldn’t have become tired. However, Stalley opted to showcase his versatility with the groovily braggadocious “Turtle Van” and “Stall God.” The back-to-back cuts feature the most colorful production on the EP, with the former sporting delightfully mystifying keyboards and the latter featuring a futuristic vibe.

And while “My Line” features a cliché hook (“niggas ain’t talkin’ ‘bout nothing”), Stalley impressively fits right in with the high-profile guest stars, Migos, on the track. Offset, in particular, makes pedestrian boasts like, “They see me in ‘Raris, and they get to panicking/ Giuseppe steppin’, I’m fresher than mannequins” memorable with an impeccable flow. The song itself not only boosts the EP’s pedigree but is proof that there’s more to Stalley than the MMG association allowed us to see.

The only major knock on Tell the Truth: Shame the Devil – Vol. 1 is the way it tails off. “Squattin’” is technically sound but adds little to the overall pizzazz of the EP. Young Scooter-assisted “Green Eyed” closes the album unimpressively, with rap-by-numbers bars about Stalley coming up from nothing and seeing envy for his efforts.

It’s understandable that Stalley would want to toast his success, given what he’s gone through to attain it. However, a more triumphant closer would have been appropriate for an EP bolstered by defiance and independence. Make no mistake, though; Stalley’s latest project is anything but bland. Tell the Truth: Shame the Devil – Vol. 1 is starkly honest in spirit and remarkable in execution.

Let’s see what Rozay has to say about this.