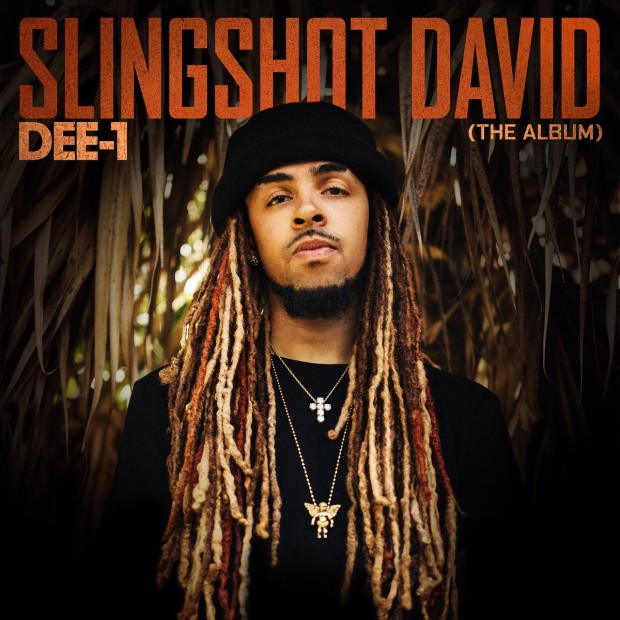 If Hip Hop is considered a young man’s game, it damn sure isn’t being classified as suitable for Christians. (Oops!) For Dee-1, the N’awlins native who was able to confidently put “rapper” on his résumé by pushing positivity without the preachiness, all the while executing sharp-minded lyricism with an ear-to-ear grin.

Cultivated by an organic buzz that has brought forth a handful of viral singles (see: the call to accountability of “Jay, 50 & Weezy” and the college tuition-crucifying “Sallie Mae Back”), Dee-1’s major label debut Slingshot David affirms his ability to make quality Hip Hop that’s both accessible and inoffensive.

From an artist persona, Dee-1 poses as an MC who’s a Christian and not a Christian rapper (there’s a difference!). Through the course of his 26-song-n-skit testimony — which doubles as metaphor for the storied biblical tale that champions the underdog and his government name of David Augustine, Jr. — avoids falling into traps that paint him holier than thou while still sprinkling gospel tinges in the song’s DNA, as heard on the inspirational yearning on “For the Stars.”

RCA labelmate and The Voice alum Avery Wilson belts out multidimensional chorus and accents motivational highs for the boys and girls like, “You see a gangsta, but me, I see a king that’s just misguided/ You see a stripper, I see a queen who just don’t know her worth.”

Armed with an anointed spirit and thick Southern drawl that aligns him with today’s rap ubiquity pool, Slingshot David is loaded with enjoyable material throughout its duration. The best of the bunch; the scenic “Hood Villains” packs on all the elements of a bona fide rap classic; with its nimble lyricism and jazzy Uptown Magnolia funk bleeds with the best of every attribute most would consider to be a true Hip Hop record.

The “edutainment” element also shines true on the swanky “My People Need Me,” where Mr. NOLA employs a catchy drunken flow and gels in witty lines like, “No Street Fighter/ I’m a rhymer/ But pockets fat like E. Honda/ Ugh! Mention my name and faces light up like Blanka,” as he plays the martyr for hard times.

With this album, Dee-1 was able to keep vantage point of being on a major label without selling out (as they say) and offering up gems that can appease a multitude of audiences. The aforementioned “Hood Villains” should be good money on radio as is the Auto-Tuned mating call “I Like You” and the autobiographical “Wanna Be a Hot Boy,” which brings listeners intimately through the French Quarter during the days Cash Money stars were rocking baggy Girbauds and Scotch tape under their pinky rings.

Slingshot David’s biggest misfire would be its narration side story, as Uno schools a 10-year-old pupil through life — and the album’s 26-selection table of contents. Seeing that he has proven himself to be an adept storyteller in the present and past (a song like “Jason Geter” brings instantaneous gratification in the department) and the multiple music-less skits simply break up the action with nearly every sit-down.

On the contrary, no one ever says they’ve been to short Black Church service and just like five smooth stones to your dome, Slingshot David offers up wisdom and life lessons that lingers in the memory bank. For those who are looking — or oblivious — to any Hip Hop alternative options from the current cultural norm, Dee-1 stands proudly as that option.