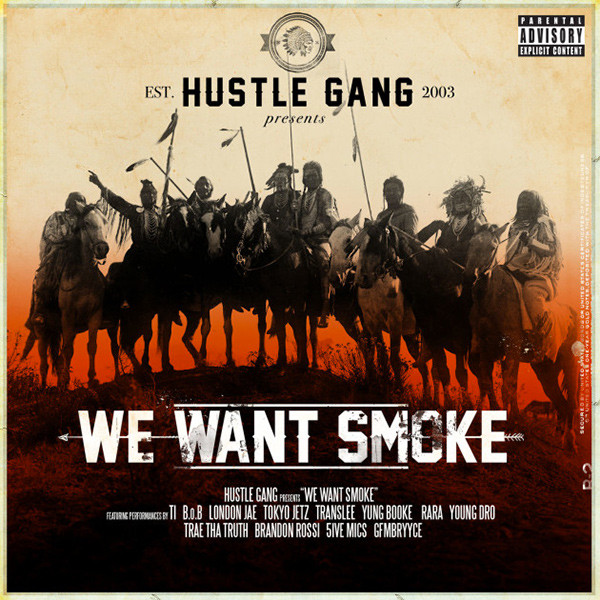 It’s hard to believe it’s almost been 15 years since T.I. and his business partner Jason Geter founded Grand Hustle Records. Since then, T.I. skyrocketed to superstardom, and label artists like Young Dro, B.o.B and Travis Scott have done pretty well for themselves too.

The label has amassed enough talent for not one, not two, not three, but four compilations released under the “Hustle Gang” moniker since 2013. The latest, We Want Smoke, firmly plants the record label in a contemporary sound, all while staying true to the traditions that originally made the crew popular.

The album is a free-for-all of braggadocio, grandiosity, tough talk, drug use and late-night leg spreading. Songs like the Percocet-ode “Gateway” (by Translee, Yung Booke, Tokyo Jetz and Ink) and the “My Block” (by T.I., London Jae, Young Dro, B.o.B and 5ive Mics) won’t win any points for originality but make for a rollicking good time. The former finds Translee flexing his pipes on an irresistible hook over airy production by Turbo and Wheezy. The latter puts Tip and Dro in mid-2000s beast mode over a beat by 30 Roc that could part the Red Sea. These back-to-back tracks highlight the crew’s focus on mixing old and new school values to stay relevant without completely becoming tied down to trends.

A staggering 18 rappers and singers plus 19 more producers inhabit the 17 tracks on We Want Smoke. While some voices get lost in the shuffle, the album keeps a tight focus by not trying to be more than a celebratory affair.

Sometimes, these themes manifest better than others. For instance, “Go Off” is marred by an annoying, repetitive hook and bland production. Stroud’s production on “Talk My Shit” is minimalistic to a fault while the next joint, “Who Gone Check Me,” painfully underwhelms.

Things pick back up with “Sometimes,” which is We Want Smoke’s crowning achievement. Over gospel-tinged piano keys, Dro and Tip revisit their old stomping grounds of Atlanta’s West Side. “That thing I know we bustin’ divided equally frequently/ Man keep it G, how many ninth graders you know seen a key,” Tip impressively recalls in a husky voice and nimble flow.

Clifford Harris graces all but four of the LP’s cuts. Dro pops up on nine joints, and more than once, shows off his surprising but impressive fast-rap abilities. That these vets, including Trae Tha Truth, blend so seamlessly with impressive youngsters like Peanut Da Don and London Jae, is a testament to the album’s versatility.

There are moments of brilliance throughout We Want Smoke, but mostly, it’s a solid offering from what has quietly become one of rap’s more consistent labels. Tip and company clearly went with the old adage “if it ain’t broke, don’t fix it,” and created one of the more enjoyable albums of the year.