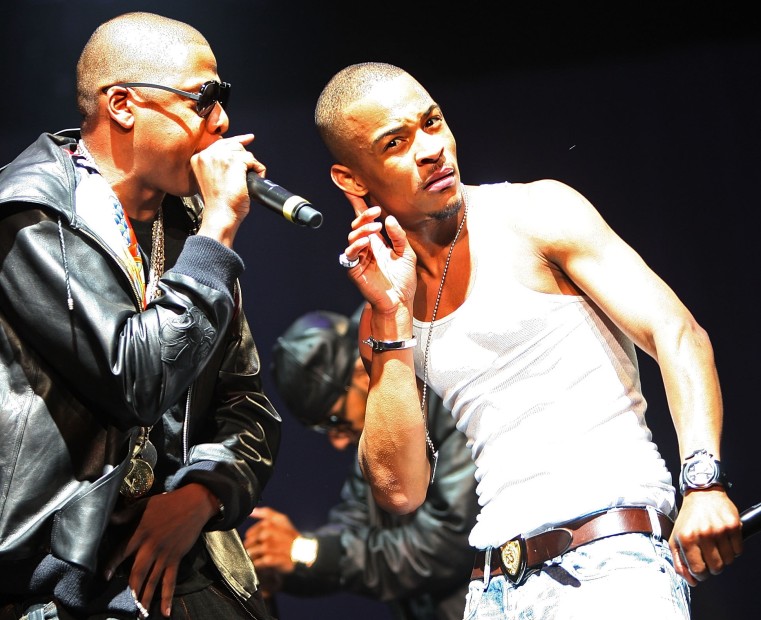 Who's The Closest Rap Descendant To JAY-Z? Look No Further Than T.I.

JAY-Z recently fired off a slew of tweets naming more than 90 rappers who have inspired him throughout his career. Named were the obvious; Rakim, Big Daddy Kane, The Notorious B.I.G., Nas, etc. But he also noted several rappers who came after him, including T.I.

At first glance, one may think Hov was just being overzealous. Influenced by a man he himself influenced? Look deeper, though, and the likenesses of these two shine through. T.I. has a style all his own but owes his crossover appeal and gangsta-player duality as much to President Carter as to 2Pac. On the flip side, Jay probably wouldn’t have had the fire in his belly to come back without a few select then-youngsters like Tip. They’re similar in their lyrical dexterity and undeniable swagger, likenesses that led Pharrell to dub T.I. “The JAY-Z of the South” in 2001. But the parallels of their success, struggles, and career paths are even more striking.

Shawn Corey Carter and Clifford Joseph Harris III have a remarkable knack for turning gully rhymes into radio hits. They possess the background — both were crack dealers in their formative years — and conviction to be taken seriously with violent rhymes like, “I even got a gun in the hair of the bun of my bitch” (JAY-Z, “Come and Get Me”). However, they sound just as convincing when spitting sensually about the fairer sex: “I hope, you ain’t offended by the way that this sounds/But uh, all I keep thinkin’ bout is layin’ ya down” (T.I., “Let’s Get Away”). A third element should be noted: S Dot Carter and the Kang have always made room for moments of naked honesty. Jay’s “You Must Love Me” and T.I.’s “I Still Luv U” are as deep and murky as the Pacific Ocean. They dominated the mainstream when they perfected the packaging of street content in radio-friendly, even melodic tunes. JAY-Z’s third album, Vol. 2…Hard Knock Life went 5x platinum and won a Grammy for Best Rap Album. It featured the mammoth hits “Hard Knock Life” and “Can I Get A…,” which turned rhymes like “I’m tryna murder everything movin’” sing-songy. After becoming a star in the early 2000s, T.I. morphed into a full-fledged superstar with his fourth album, King. Catchy, almost melodic flows, such as on the smash single “What You Know,” had suburbanites rapping along to bars like “Just keep it very coool, or we will bury youuu.” Most impressively, Jay and Tip have straddled the line between purist and pop without detracting much from either element.

Both Carter and Harris are natural-born hustlers. This was evident early on, when they started their own labels Roc-a-Fella Records (Jay) and Grand Hu$tle Records (Tip). They had the foresight to expand beyond music. T.I. brilliantly coincided the release of King with the release of his film debut, ATL, even making “What You Know” the movie’s anthem. More film roles were to follow, as well as a clothing line, two novels, and a reality TV show starring his family. Jay was never much for acting, but he is currently the richest rapper alive; his $800 million net-worth is thanks to his music, Roc Nation, the streaming service TIDAL, a movie and television deal with the Weinstein Company, Rocawear, and Armadale vodka. JAY-Z and T.I. are far from the first rappers to venture into other areas of entrepreneurship. However, their business acumen lays claim to another similarity between them.

Jay and Tip started their own labels because they couldn’t get, or keep, major label deals. A&Rs apparently didn’t see the potential of two of the greatest rappers of their respective times. So JAY-Z, along with Damon “Dame” Dash and Kareem “Biggs” Burke, created Roc-a-Fella Records and Jay dropped Reasonable Doubt in 1996. It is now considered one of the greatest rap albums of all time, but at the time it paled commercially to Nas’ It Was Written and 2Pac’s All Eyez on Me, released the same year. T.I. was dropped by Arista Records after his poorly promoted, underrated debut I’m Serious failed to find success on the charts in 2001. Neither artist was deterred; Jay continued to grind with the Roc and wowed on star-studded affairs like Big’s “I Love the Dough,” while T.I. toured the South, created Grand Hu$tle Records and dropped three sizzling In Da Streetz mixtapes. In addition to their talent and work ethic, Jay and Tip were aided in their ascension to the mainstream by the decline of other rappers. Biggie’s murder in 1997 opened the door for Jay to become “King of New York.” Just as Biggie’s tragic passing paved the way for S Dot, Jay himself played a role in T.I.’s rise to stardom.

When Jay “retired” after The Black Album in 2003, he left a Milky Way-sized hole in the rap game. While 50 Cent assumed the mantle of “King of New York” and became insanely popular, he didn’t quite have the smooth manner that Tip possessed. Fresh off a stint in jail for violating his parole, T.I. became just that person. He brilliantly flipped a Jay bar over bouncy Swizz Beatz production on the hit single “Bring Em Out” off the at-once hard and glossy Urban Legend. The anthem fulfilled his destiny as “JAY-Z of the South.” Is it really a coincidence Jay came back just two years later, as Tip was hitting full stride?

Jay was not wrong when he boasted that Reasonable Doubt should have gone triple-platinum on “Blueprint (Momma Loves Me).” The album is a window into the psyche of hustlers with ambition and few choices. Other rappers had been introspective about the drug game before Jay, but none had done so on the level that listeners felt like they were listening to a rapper pour his heart out to a therapist. Instead of directly glorifying drug dealing, Jay examined the game’s pros and cons with surgical precision.

As Chris Rock said, the game has been following his lead ever since. This included T.I., whose second album, Trap Muzik, was mined from his days throughout Bankhead. Tip started a movement of his own as the album, now considered a classic, essentially invented Trap Music. Current stars like Future and Grand Hu$tle-signee Travis Scott owe their styles to Clifford Harris.

Old habits die hard, and both Hov and the Kang found themselves in hot water over personal transgressions. Jay was charged with the stabbing of Lance “Un” Rivera at the now-defunct Kit Kat Club in 1999. The conflict was either over Rivera leaking Jay’s music or over Charli Baltimore, depending upon who you ask. In 2007, following the murder of his best friend and manager Philant Johnson, a guilt-ridden and paranoid T.I. stockpiled a small arsenal of automatic weapons and landed in hot water with the ATF. Struggle can turn into great art, and Jay and Tip did just that with their next solo albums. A far cry from the glitz of his recent work, Hov opted for down-home soul on The Blueprint. He poured his heart out to a former flame on “Song Cry,” passionately decried haters on “Heart of the City” and got waist deep into his thug roots on “Never Change.” The album also included hit singles like “Izzo (H.O.V.A.)” and “Girls, Girls, Girls,” and Jay, more than ever before or since, was able to please both purists and pop fans. T.I. achieved a similar feat. Facing the possibility of decades in prison, T.I. took his time to craft an album both heartfelt and fit for pop radio. “You Ain’t Missin’ Nothing” is a low-key, jazzy nod to prisoners, while “Dead and Gone,” reflects on his mistakes and growth. Meanwhile, glamorous production made “Whatever You Like” and the Rihanna-assisted “Live Your Life” back-to-back No. 1s.

Today JAY-Z and T.I. are regarded as elder statesman of Hip Hop, albeit on different levels T.I.’s prison stints have kept him from Carteresque levels of success, and he didn’t really get his mojo back until last year’s Us Or Else: Letter To the System. However, the album proved he can still spit with the best of them. Meanwhile, JAY-Z, probably inspired by the new crop of talent, including T.I., returned to the game in 2006. Every release since has been commercially, if not always critically, successful. Save some stellar features, he’s been in a shadow from an artistic standpoint since 2013. Though those 4:44 signs have the internet abuzz, only time (considerable time; not Twitter review time) will tell if it will go down as valuable entry into his catalog.

Shawn Carter and Clifford Harris are essential to each other. T.I. is not a copycat; he’s very original in his southern sound, story and flow. He was a frontrunner in popularizing Trap, which rules the airwaves. However, who knows just how big he would have been if Jay hadn’t previously brought the suburbs to the hood? In turn, hustler-turned-rappers like T.I. kept Jay on his toes, and one could argue they motivated him enough to stage a comeback.

Without JAY-Z, there may be no T.I. And without T.I., Hip Hop as we know it does not exist.