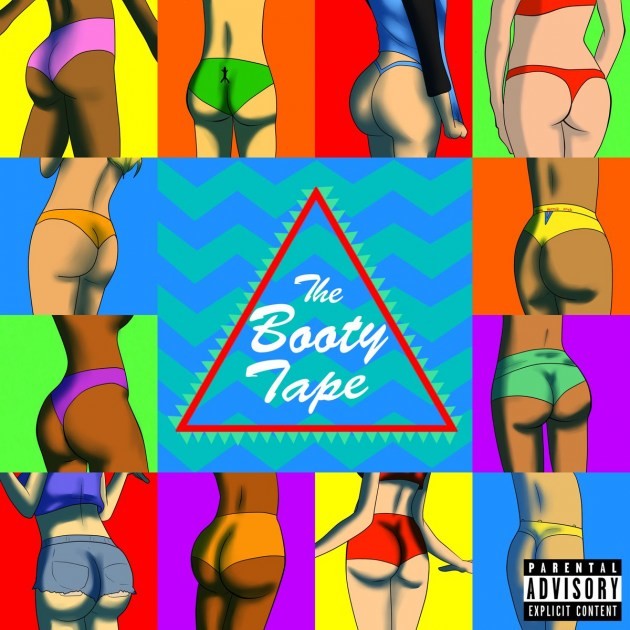 There probably isn’t another rapper alive that embraces the faults of his character so wholeheartedly as Ugly God. “Welcome To The Booty Tape,” the virtually self-titled opener of the Houston native’s debut project The Booty Tape mixes his strengths of self-depreciation, hilarity and basking in the hate quite well. Where other, more polished rappers, take the words from naysayers and attempt to prove them wrong, Ugly God embraces the…well, ugly. Safe to say, if you didn’t like Ugly God before The The Booty Tape, this album probably isn’t for you.

That’s not to say that this is one bad piece of work. Quite the contrary, if you’re open to digging under the attention-seeking meme-esque flair, The The Booty Tape is smooth in its 90s inspired execution. First, Ugly God establishes his unique aesthetic. He then sticks with it throughout nine tracks before his claim-to-fame single “Water,” rounds out the so-called “mumble rap” movement.

“He’s singing like…pornographic stuff!” says the shocked female voice on the aforementioned intro, a surprise to no one ever. Part of what makes Ugly God one of the more original rappers in the 25-and-below age bracket is the fact that he isn’t afraid to dip heavily into sexual content, at times, fetishizing. On last year’s “FTBT (Face, Titties, Booty, and Toes),” he shameless championed his love for feet. The track, while funny, also highlighted his knack for making ridiculousness sound enjoyable. While he doesn’t strike the fetish lightning twice, he does go for similar thematic content on this album as well. The bluntly titled “I’m A Nasty Hoe” builds on the concept of giving us that same TMI touch exhibited on “FTBT”: “She said, ‘Boy I’m on my period.’/I said, ‘I don’t give no fuck!’” He even references the prior song, with “Face, titties, booty, and toes/What I’m eating for lunch.”

Elsewhere, on “I’m Tryna Fuck,” Ugly God cranks up the X-rated content to an eleven. “Girl you know I’m fiending/eat this meat you ain’t no vegan,” he says, almost sounding as if he’s conveying a threat. The hook on the track is catchy enough, if vulgar to the point that you may not want to play it in public without garnering some evil glares.

For these two tracks, as well as “No Lies” (which features the project’s sole guest appearance in Wiz Khalifa), Ugly God leans on the silky production to provide the ambiance that offsets his sexual ramblings. Each track’s production is calm enough to balance out his crazy lyrics enough to make them sound pretty good. It makes sense that due to their subject matter that these would be the most intimate tracks on the project.

When he veers away from inquiring about sex with unnamed women, his songs get mixed results. “Fuck Ugly God” may be the worst of the bunch, with the aforementioned rapper screaming the song’s title as the chorus and yelling his loudest on his verse. While it is sonically obnoxious, it does embrace the idea that he isn’t afraid to acknowledge his misgivings. He raps “Your net worth say you got a million, but your ass don’t/You a one-hit wonder, bitch, your whole career a joke” while adopting the stylings of Eminem in 8 Mile but uses a less poetic approach. The silky baller ode “Like a Maverick” fares a little bit better, where he quips “Hoes on my dick I put gold on my wrist now my neck really cold like a penguin.” You feel the comedic punch, but at the same time, you can denote where he’s trying to be a lyricist — to a certain degree.

Maybe the woman exclaimed her disdain for Ugly God from jump judged the rapper too harshly. Yes, he raps about sex and no, he’s not The Second Coming of a god MC. Meanwhile, his beat savvy is also commendable, as it ranges from a romantic night soundtrack to the best Lex Luger impression you can find on YouTube. But being open-minded to Ugly God’s The Booty Tape may just garner him fans in unexpected places.