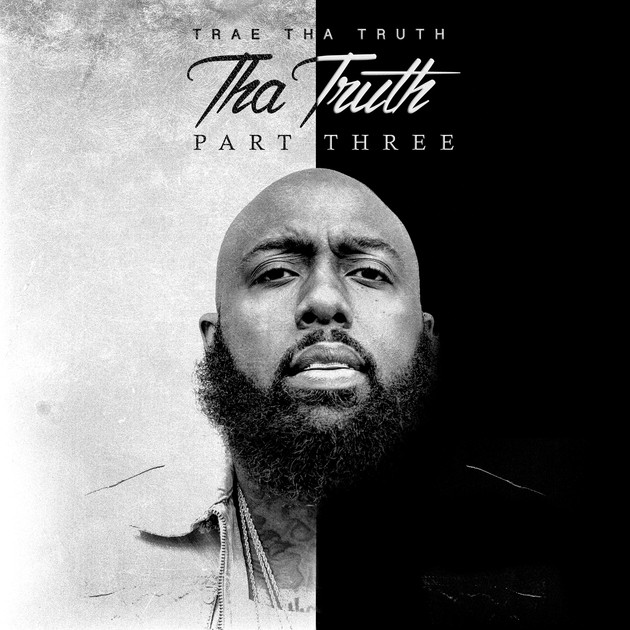 Trae Tha Truth may not be a household name, but the Texas-bred hustler has carved out a lasting legacy in the realm of music. The veteran MC has become a pillar of the Houston, both in its storied rap scene and the local community. The respect in his hometown is so prominent that he even got a day named in his honor. Without compromising his patented brand of street philosophical raps, Trae has managed to withstand the constantly evolving landscape in rap and maintain his position as a stalwart force in Southern Hip Hop for nearly 20 years.

The type of self-assuredness one needs to sustain a career like Trae’s is evident on his new album Tha Truth Pt. 3. The third entry of Tha Truth series sees him in the role of the O.G., but not the type that’s become bitter in the face of Hip Hop’s evolution. Instead, Trae acts as a bridge by connecting with the new generation and doing so without pandering to them at all.

With guests on all but three of its 18 tracks, Tha Truth Pt. 3 plays out less like a true solo album and more like “Trae presents” type of effort. That’s not a bad thing though as the Asshole By Nature finds a way to play to the strengths of his featured artists while largely sticking to his tried and true formula.

One of the best examples of Trae’s ability to utilize his guests is the standout cut “Fallin Down” featuring D.R.A.M. On the track, D.R.A.M. delivers a passionate hook that serves as a perfect change of pace aside Trae’s rapid-fire rhymes on this soulful cut. The Post Malone-assisted “Too Late” is another instance of striking the right chord with Space City native playing off the Dallas crooner’s melodic style.

Trae does an admirable job at executing the difficult balancing act even when things steer slightly out of his lane. “Thuggin” certainly seems more tailored to the sensibilities of guests Young Thug and Skippa Da Flippa, yet his opening verse fits right alongside the Atlanta rhymers. “Pull Up” is another instance where the beat is more of Maxo Kream’s speed but he adjusts accordingly and makes it work.

Unsurprisingly, the finest records on the LP are comprised of the heartfelt and blunt content that Trae’s been known for throughout his run. The opener “Can’t Get Close” is a touching tribute to his deceased friend Money Clip D. The nostalgic “Take Me Back” is as relatable as it gets with reflections on days gone by and how the good memories shine so bright.

While the former Guerilla Maab member really seems to have found a groove with the slower pace displayed on these songs, his quick flow is still ever present when paired with the right tempo. “Ghetto” featuring T.I. and Wyclef Jean shows he hasn’t lost a step with the swifter delivery (“I’m fighting knowing nothing promised/I’m close as hell but still can’t time it/Just riding trying to make it home/That’s real life, fuck this song/My sons know they daddy good…” he quips on the opening line).

The biggest fault one will find with Tha Truth Pt. 3, is that is bloated. The LP clocks in at 78 minutes, complete with an eight-plus minute posse cut to end the record. There’s a ton of great additions to a playlist, but the length doesn’t give it much replay value unless the listener’s already a diehard fan. The H-Town staple has always packed his albums with a ton of content though, so most delving into this one probably knows what to expect.

Although its runtime might not be conducive to the shortened attention spans of a younger audience, Tha Truth Pt. 3 is an ideal illustration of how vets in the rap game can coexist with artists from the new era. Trae’s ability to reach across the proverbial aisle and achieve some common ground sets him apart from the stereotypical old head. And most importantly, he does it all while staying true to himself.