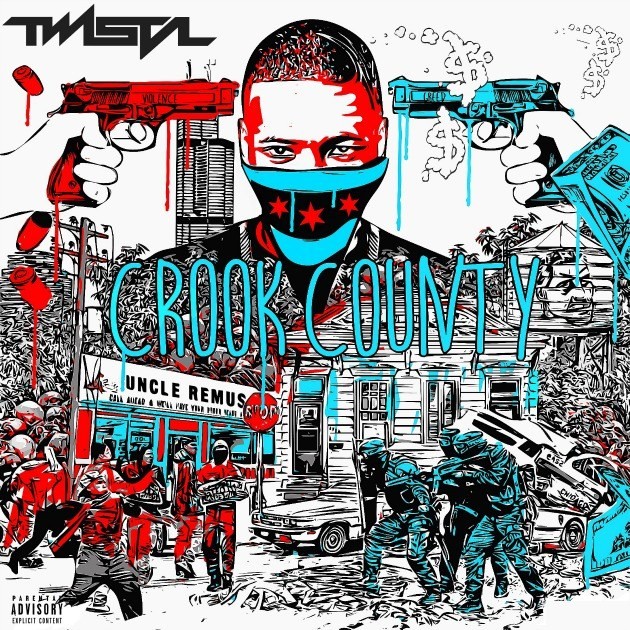 Hip Hop is no longer exclusively a young man’s game. This recently has been illuminated by strong releases from Bone Thugs and JAY-Z. Given this momentum of veteran resurgence, now would be the perfect time for the 43-year-old Twista to emerge from the eye of the storm and cause wreckage to the Hip Hop community like he’s known to do. Unfortunately, Carl Mitchell’s attempt to stay relevant with his latest album, Crook County, falls flat.

Make no mistake: Twista’s flow still will tie your tongue in a knot while you try to rap along with him. His delivery still defies gravity. And he still has the same ear for flavorful production. However, technical superiority doesn’t make up for Crook County’s lack of direction. Rather than document maturation and growth, Twista spends his time rehashing tired themes such as pussy, money, weed (word to Lil Wayne). There are three — yes, three — songs alone specifically dedicated to dead presidents. “Stackin Paper” comes just two tracks after “Paper Chasin,” while “Spend It” is the penultimate cut. Tracks about the same old, same old may have been a little more acceptable if Twista was creative in his rhymes. Unfortunately, couplets like “Shawty pop it all in front of me, the booty movin’ round and round and round/Guess she heard I be finessin’ and I get it I’m the man around the town,” are laughably simplistic.

Where Twista once combined his rapid-fire flow with stellar lyricism over memorable production, he has trouble putting all the pieces together on this album. For instance, he mars a catchy, colorful beat courtesy of Zaytoven on “Baddest” with cliché bars about a fine woman that would have once been far below his pay grade. Inversely, “Hollywood” is a subdued middle finger to those who criticize him for achieving fame and making personal changes, but is backed by a beat that could double as a lullaby. This mismatching isn’t always the case; the album starts strong, with Twista convincingly thumping his chest on “Disrespectful.” That is followed by funky “Mortuary” on which Twist impressively rhymes “They unappealing while my flow rifle so vital/Have you dance on the ceiling like some throwback vinyl from Lionel.” Crook County’s clear standout is “Next to You” on which the Windy City rhymer smoothly spits over a sample from Rose Royce’s “I Wanna Get Next to You” (film buffs may remember it from Friday). Jeremih sprinkles in a silky hook that completes the package and proves that Twista still has a knack for Rap-R&B fusion.

With more songs like “Next to You,” Twista would have crafted a decidedly entertaining album, if not one that had the wisdom one might expect from a man in his 40s. Sadly, the aforementioned “Spend It” and “Can’t Be Me” are sore reminders of this album’s norm. Despite Twista’s admirable energy, Crook County fails to rise above general hood detailings.