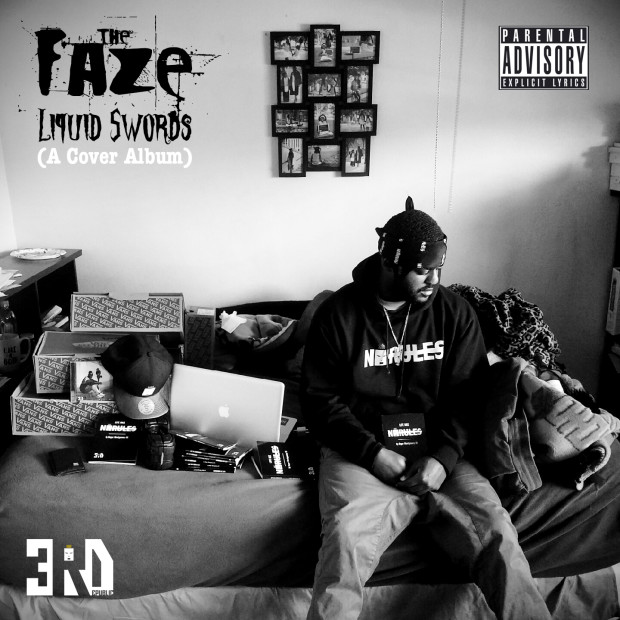 After nearly 10 years in the rap game, California lyricist The Faze has showcased his newest source of inspiration for his career’s second wind. From the direction of his producer Henry, Faze decides to look no further than Wu-Tang Clan’s “Voltron head” GZA and his 1995 masterpiece Liquid Swords. Similar to the second verse’s opening lyrics in the album’s title track, The Faze is on a damn-near impossible mission to his balance and prove with his erudite lyricism without seeming like a biter or uninspired by GZA’s songwriting over RZA’s symphonic and prog rock guitar-heavy East Coast underground boom bap of yore, all in one swing of an album predictably titled Liquid Swords (A Cover Album).

The SoundCloud-only 11-track album opens with “4th Ave & Slauson,” which has the treble reduced for the first twenty seconds of the instrumental to GZA’s “Investigative Reports.” Similar to the original track, a female TV anchor details a police report of an armed department store robbery in the area the same night and time period that Faze and his friend coincidentally end up being in the wrong place at the wrong time. The allegory falls into Faze’s sense of normalcy being racially profiled and physically violated by police at that 4th Ave and Slauson intersection in Los Angeles.

Perhaps the most direct influence on Faze’s songwriting on his album unrelated to this cover album is established on the second track “Black Slim Shady” over the beat to “Duel Of The Iron Mic.” Faze blatantly duplicates the “I Just Don’t Give A Fuck”-era Eminem off the late 90s with a nasal, slight Midwestern twang and intonations from Em’s origins, and freestyles to fit as many rhymes and grotesque imagery in his metaphors as possible. He does the same for the same-titled cut “Gotcha Back” in which he spits flames over GZA’s ad-libs in the background and repeats the song’s original chorus.

The Faze’s iteration of Liquid Swords is a SoCal roguish, more animated take in his resounding sneer than GZA’s leisurely, less-is-more approach to crafting bars and plays off syllables. There’s great songs like “41 E’s” over GZA’s “Gold” beat, and the hilarious “Uber Driver” about picking up random Uber users from all walks of life that remind you of a Millennial’s version of Robert De Niro in the iconic 70s film Taxi Driver. On the “Dog a B!tch Radio” interlude, The Faze dramatizes himself as local radio host getting multiple complaints from a disgruntled caller hearing the beat to “Killah Hills 10304” on the fictitious radio show, showcasing how some of his Cali-based peers remain haters of anything that are foreign to the prototypical West Coast hardcore gangsta and modern funk motifs.

“Labels ‘Fuck Your Contract’” is a revisited middle-finger to rap record label executives, and “Marketing 101” runs down Faze’s list of business savvy pitches for celebrities and items that made them famous or infamous (“You see the plan that I had for O.J. Simpson to sell would’ve had him selling black gloves out of Bloomingdales/Even running backs and wide receivers, I’d make a killing off of Ray Rice selling wifebeaters”) along with Faze’s reverberant, cacophonous chorus “I can show you how to make this money!” The only thing mysteriously missing from this cover album is the title track “Liquid Swords,” the first song on the original album! That’s like covering Michael Jackson’s Bad album without performing the most important and initial single “Bad” atop the tracklist.

Most rap covers are hit or miss, with little room in between to be deemed as original. But this cover album is executed well and helps dismiss the malcontent argument that today’s rap artists are ambivalent to the preservation of the art of rap and Hip Hop history. Progression comes with objectivity to learn from personal and other’s works from the past without being entrenched in one’s own stead. But applying lessons learned from records that transcend time and legendary artists are key to a gaining adoration, respect, and success with a substantial return on investment, even though Faze didn’t monetize nor is looking to profit from this project.