Review: Quentin Miller Gets His Frake On With Uninspired “Gunmetal Grey” 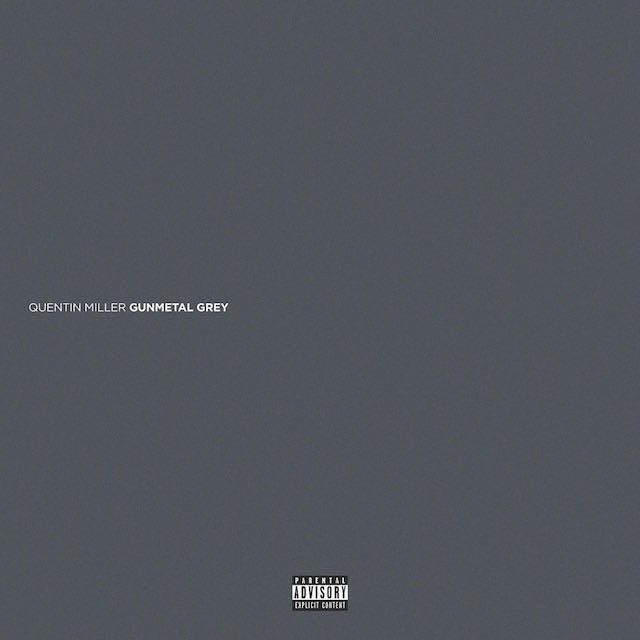 Quentin Miller has had a rough 18 months. Being launched right into the middle of the Drake/Meek Mill beef probably wasn’t part of his come-up plan and catching the proceeding Dreamchasers beatdown certainly wasn’t either. To top it off, he lost a foot during a car crash which was the worst happening of them all. The only real way to demolish this year-long curse of his would be to drop music so damn hot, the people make that their new storyline. But, sad to say, Gunmetal Grey is far from the recovery album he needed.

In fact, it’s easy to see why and how the Atlanta native was placed as a ghostwriter and not as an OVO frontman in the first place. The way he patterns his song structures and takes the “less-is-more” approach to writing is very contemporary Drake-esque but his vocal performance and delivery could cure insomnia as we medically know it. The deep rasp in his voice seldom borders on fascinatingly ominous and is often flat-out boring. The one point on the entire album when he breaks away from his monotone mumble to show to vocal range comes courtesy of “Bad Intention.” As he attacks the hoppy beat with an exaggerated “whoa!” QM belts out “You can’t say you beat the odds when you didn’t” with a semi-strong conviction.

As for everything else Gunmetal on the lyrical tip, the keypad gets a workout because he’s simply phoning it in – almost like he isn’t wholeheartedly invested in his own bars. Especially when he spews heaps of filler lines and most of all “deading” peoples’ careers which has yet to be seen. Luckily, QM proves his worth with the beats and rhythms. Between the electric grooves on “Make It Take It,” the time warping irregularities on “Look What I Did” and the soul sample on “Grey Leather,” it’s hard to deny Quentin’s ability to curate sonics.

Ironically (or not) for the alleged ghostwriter, a lot of the tracks on this album sound like reference tracks themselves, unfortunately, gaining him no distinct identity or tangible takeaway. The songs are short, messy and by the end of the album, no narrative has appeared to have been pushed. He opens up the curtain ever so slightly to address the ghostwriting rumors on the opening two tracks but as expected, they are uber subliminal. On “Expression 3,” he bigs up his 6ix god by saying “Really, thank them dudes for giving me a shot at this/Even if that shit was not intentional” but then big ups his own merit with the boastful “If my name is on it then it’s some iconic shit.”

His vulnerability shines through best however on bonus track “To Turning 27” (which is by far the most telling and lyrically engaging). Over a haunting self-produced piano loop he questions his own minute place in the rap game and if it’s everything it was cracked up to be. It’s the only time on the bleak project where one can comprehend the plight of a young music industry hopeful that got caught up in circumstances beyond his control and now gets slapped with the “ghostwriter” title at every turn.

For Q to truly break free from the ghostwriting shackles he is currently bound by, he will have to step up his execution tenfold. If he continues to put out music that sounds like the infancy of a great Drake record, he will stay on a career path as dull as his own voice. Not to mention, make wack albums like this.