Review: BROOKZILL! Provide Solid Nostalgia With "Throwback To The Future" 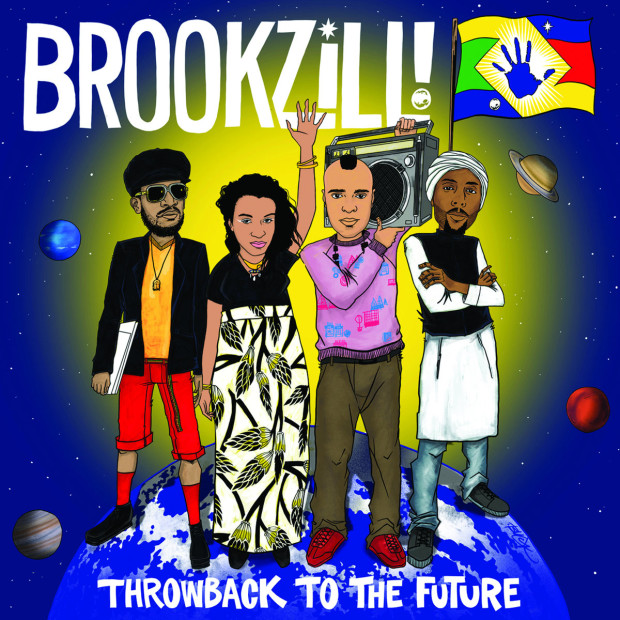 From his initial work as Stetsasonic member and De La Soul’s producer, through to the horrorcore supergroup Gravediggaz and his Handsome Boy Modeling School project with Dan The Automator (as well as his own albums: Psychoanalysis (1996), A Prince Among Thieves (1999) and 2003’s Politics of the Business), Prince Paul has long been one of Hip Hop’s most inventive outliers. For more than 25 years, the Amityville-born producer has consistently eschewed the more straightforward route of making and releasing music in favor of a more off-piste vision, built around the use of off-the-wall samples, concept-based albums and humorous skits.

That resolutely experimental streak which runs deep in Paul’s music is once again evident in his new project, BROOKZILL!, which is pitched as a fusion of the streets of Brooklyn, the soul of Brazil and is a four-strong collective comprised of Paul himself, former Digable Planets starlet Ladybug Mecca (who is of Brazilian heritage), Gorila Urbano (aka São Paulo rapper Rodrigo Brandão) and De La Soul producer Don Newkirk.

Musically, the album is at its strongest on tracks such as the lively “Nascido No Cú,” which splices together energetic cutting and scratching with vibrant trumpets and xylophones, a carnivalesque offering that works as a pretty neat summary of the project’s wider Brooklyn-Brazil sonic nexus.

Among the gathered guests, which include turntablists Kid Koala and one-time Company Flow man Mr Len, Del The Funky Homosapien arguably shines brightest, dropping a vivid back-in-the-day reminisce rap on “Maralém,” during which he recalls the early days of Hip Hop, sketching pictures of Garfield and The Smurfs, Dungeons & Dragons, and watching Duck & Cover nuclear safety videos in class.

That said, the album’s not without its sluggish moments. “Mysterious,” which slows down the tempo, feels like a slump in proceedings, while the posse cut “S. Bento MC5” comes off as rather pallid compared to the more exciting South American audio pyrotechnics served up earlier. The track, which features rappers Thiade, Xis, Espião and Rodrigo Ogi, is hamstrung mainly by an early ’90s-style chanted chorus, a style long past its best. Indeed, here and elsewhere, while the vibe may feel authentically Brazilian, non-Portuguese speakers may ultimately feel left out of the party.

Still, with its expansive blend of Big Apple rap and a broad range of Brazilian music, Throwback to the Future – the title acting as a nod to both the project’s stripped-back drum sounds and its 21st century cross-pollination of musical genres – carries an invigorating continent-hopping ambience all of its own. As with so many projects with Prince Paul at the helm, it’s a genuinely intriguing sonic excursion.