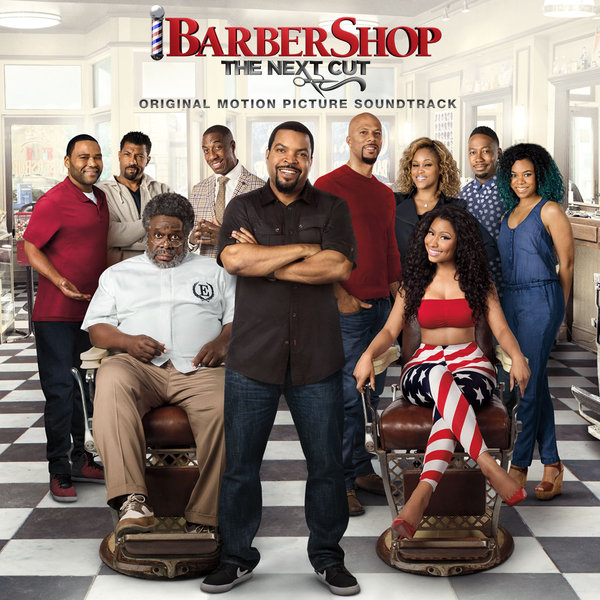 When Barbershop 2’s end credits flashed across silver screens back in 2004, many moviegoers wondered if that would be the last time they get to see Ice Cube and the gang dust off their clippers. Up until that point, The Barbershop series had generated a ton of positive momentum with both installments performing very well critically and commercially. Naturally, fans of the series demanded an immediate follow up to which they only got Queen Latifah’s lackluster spin-off Beauty Shop.

Fast forward twelve years and we are finally given the third installment to the Barbershop franchise–Barbershop: The Next Cut. Not only is it two hours of notable writing, directing and of course acting but it’s also filled with a brand new soundtrack that aims to complement the movie at every turn. Since the days of Juice and even Superfly, movie soundtracks don’t hold much weight outside the movie’s run time. Luckily on this soundtrack, the m.o. of slapping together the most recognizable chart toppers together of the present day is eschewed in favor of focusing on more original content.

Which translates to best track of the compilation, “Real People,” featuring Ice Cube and Common, both of whom star in the movie. The two rap legends swap back and forth bars about peace and positivity over a funky boom bap beat. Cube’s first two lines confirm, as if we didn’t already know, that their beef from back in ’96 is officially buried. “We used to fight and fuss, we used to yell and cuss/We used to cock and bust now look at us” sounds a little generic but after Common dropped the gut-wrenching diss track “The Bitch in Yoo,” neither of them thought that over a decade later they would be co-starring together in a blockbuster comedy. Lizzo’s “Good As Hell” is snappy, cheerful and the chorus belts out “I do my hair toss/Check my nails/Baby how you feelin’?/ Feeling good as hell” making it very barbershop specific.

The “good times” vibe of the movie matches seamlessly with golden gems such as Curtis Mayfield’s “Move On Up” and “September” by Earth, Wind & Fire, which are all perfect examples of background music for the Palmer family barbershop, if it actually existed. It isn’t all oldies, though. The soundtrack scatters in some more recent feel-good R&B jams like “Working Class Heroes” by CeeLo (from his Heart Blanche album) and Leela James’ “Set Me Free,” an effervescent break-up jam from 2014.

Even without seeing Barbershop: The Next Cut, you can do a good job at guessing when each song is played throughout the movie. For example, when times get tough for the characters you can envision the slow building, acoustic ballad “Hold On” by Kem will be playing in the background. With that said, the experimentally minimalist in Gabriel Garzon-Montano’s “Everything Is Everything” renders itself the odd man out on the project.

The soundtrack to Barbershop: The Next Cut won’t top the streaming or download charts nor ever rank amongst the most notable soundtracks but it does provide listeners with some future hit hopefuls coupled with classics.