Bas - Too High To Riot 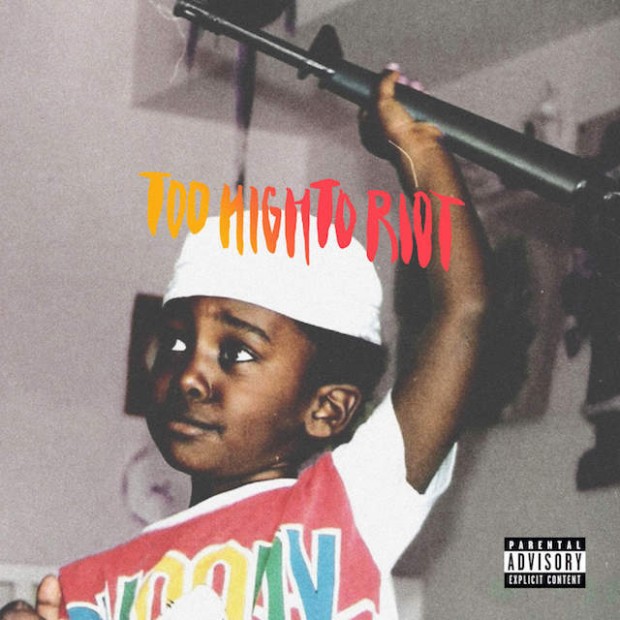 Just for a second, let’s imagine Dreamville Records as the ‘95-’96 Chicago Bulls. If label manager Ibrahim is Phil Jackson, then J. Cole is Michael Jordan, Cozz is Steve Kerr, Omen is Dennis Rodman and Bas is Scottie Pippen. Most basketball fans would claim Pippen only did numbers because of MJ – downplaying his individual merit. Although Jordan did elevate Pippen’s game in the clutch, Scottie was very much a superstar in his own right. This same narrative applies to Bas. Since the Queens-bred rhymer inked his name with Dreamville, there have been many J. Cole comparisons and mentions of Bas “playing in his shadow.” But Too High to Riot, Bas proves he is as capable as any to hold his own and craft a fluid body of work.

The 12-track LP picks up exactly where his 2014 debut, Last Winter, left off. On his freshman offering, Bas explicitly walked us through the chronicles of his come up, which he synopsizes on this album as: “left the town a drug dealer and came back a fucking poet.” Too High to Riot still has glimpses into those early years but focuses mainly on Bas’ current endeavours in both the rap and real world.

One endeavour that gets touched on more than others is drugs. Second track, “Methylone,” turns what could have been a dangerous narcotic mix up into a catchy single. Apprehensively claiming things aren’t always as they appear, Bas raps “I need to leave this shit alone/I’ve been doing the wrong drugs all along/Niggas’ll sell you any dream where I’m from/That ain’t molly my nigga that was methylone” – the line can be interpreted both literally and metaphorically. “Dopamine” with Cozz is another track that uses that same storyline to relay a bigger story of self-awareness and success. Both records are executed in a way that personify drugs as the vices of success, something Bas is recently having to deal with. The same double meaning can be seen with his FIENDS brand.

Contrary to the Jordan/Pippen parallels, J Cole’s doesn’t have much involvement in this project aside from a verse on “Night Job” and some style similarities on “Live For.” The song’s intricate storytelling about dealing with the guilt of sacrificing family for success is something Cole has ultimately perfected over the past few years. Bas takes a page from that same book but with his own personal twist. He manages to deliver witty punches even on the album’s most linear song. “I’m mister Jekyll, I’ve got something to Hyde (hide)” both forwards the song’s storyline while remaining a standout punch. The concluding track “Black Owned Business” is the album’s pinnacle. It’s a very well-articulated take on the current race issues plaguing America. Lines like “Hey world, your favorite movie is on, it’s called attack on niggas/The fathers that didn’t pass, they all stacked in prison” are bone chillingly genuine to say the least.

From a production standpoint, Bas knows what works best for him and is never caught rapping off beat, off-time nor off-pace. Most tracks have moody backdrops where musical varianceis routine; a recipe for the traditional rhyming pocket. This sonic cohesiveness can be credited to his long-time collaborator and producer, Ron Gilmore. Soundwavve, and London outfit The Hics are amongst the few others who lend their talents to curating Bas’ sound. While no two songs sound the same sonically or thematically, Bas often gets caught using the same rhyme patterns. The cadence in his voice from verse to verse comse off with a lack of conviction whether the topic is boastful or humbling. In the grand scheme of things, this doesn’t hinder the individual tracks but gets a little exhausting after 36 straight minutes of listening.

Too High to Riot is hands-down Bas’ best work to date. It’s a smooth yet potent project with few stumbles minus the rhyme variation. It mixes all of his strengths into one cohesive package and demands to be played again and again. With only four real concrete years in the game, this latest installment to his catalog is the foundation he needs to potentially become Michael Jordan himself; or at least Steph Curry.