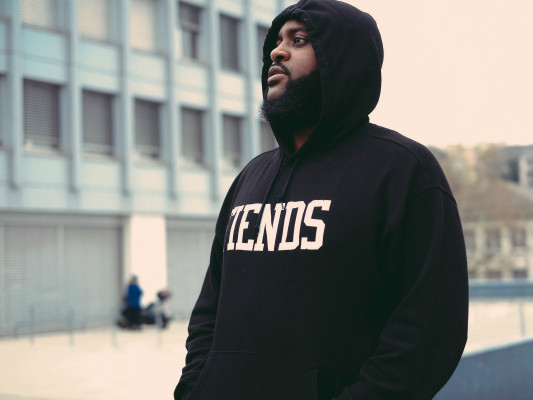 Bas released his Too High to Riot album today (March 4).

The Queens, New York rapper‘s sophomore LP is made up of 12 tracks, including the single “Night Job” featuring J. Cole. Fellow Dreamville signee Cozz makes an appearance on “Dopamine.”

Bas spoke with HipHopDX about the inspiration for the album, which partly stemmed from when he accidentally took methylone (MDMC) instead of what he thought was molly (MDMA).

“I feel like a lot of times, the drugs are used as a perspective to [highlight] what I’m really doing in life. It’s almost sobering in itself,” he said.

A trip with J. Cole to Ferguson, Missouri where Michael Brown was shot and killed by a police officer in 2014 also gave Bas the perspective he needed for Too High to Riot.

“We got a voice but I’m becoming more aware how our voice is growing,” he says to HipHopDX. “Going [down there] changed my perspective on what we could do. It’s easier to sit back and be a cynic but we really speak to people–and they connect to it.”

Too High to Riot is the follow-up to Last Winter.

Bas’ Too High to Riot album cover art, tracklist and stream are below: