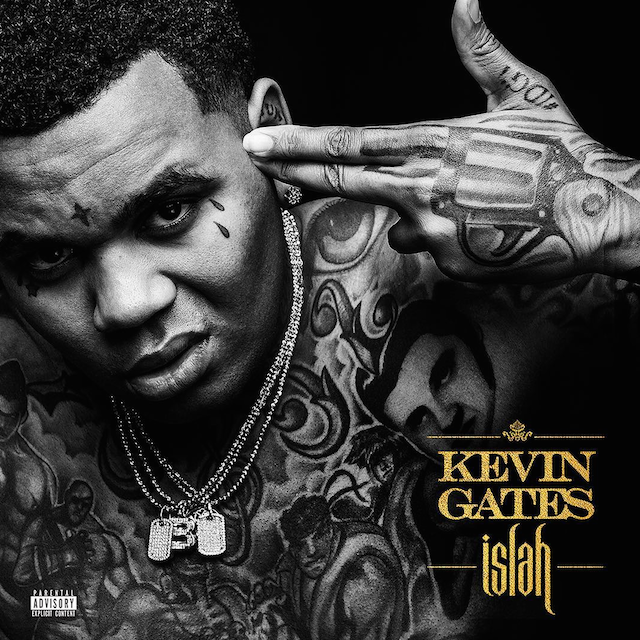 It’s been nearly three years since Kevin Gates signed to Atlantic Records, but he has remained in blog and news headlines the whole time – though it seems rare that it’s been for his music. The N’Awlins native is arguably best known for admitting that he continued to sleep with a woman after finding out she was his cousin, assaulting female fans at shows in Florida and Michigan, and social media antics like uploading a photo of his dead grandmother while covering her mouth with his hand. But he has been making music since 2007 when he came in alongside fellow Louisiana rhymers Webbie and Boosie, and his fans swear by his authenticity. And to his credit, he backs up the controversy with music: he’s released more than a dozen mixtapes since 2006, with five of them since 2013. His studio debut Islah, named after his daughter, will satisfy fans who have been waiting and show new listeners that he’s more than timeline fodder.

Kevin Gates is at his best when infusing specific names, images and situations that make his tales one of a kind. “The Truth” revisits the aforementioned attack in Florida with his idea of compromise: he chastises the fan for ignoring his warnings to stop reaching for his crotch (“you a queen and you wasn’t respecting yourself”), but kicks himself for putting himself at risk to be separated from his daughter. The refusal to empathize for his victim is frustrating, but his vocal inflections – rising to the point of an angry tremble as he revisits details and imagines worst-case scenarios – make his investment palpable. He also shows emotional depth on his songs about romantic relationships. “Pride” wistfully hopes the one who got away is still within reach, while “Ain’t Too Hard” admits a cause behind his stubborn exterior. “My mother died when I was young, I’m commitment shy, so when feelings get involved I tend to run,” he reveals. He contemplates suicide and drowns his sorrows in painkillers on “Told Me” while lamenting friends lost through killings or disloyalty. He says “I’m just the realest you done met” on “Ain’t Too Hard,” and he shows it.

Islah also flaunts the versatility that most major label hopefuls aspire for with their debuts. Machismo and vulnerability, scrapping and boning, rapping and singing: Gates uses his diverse arsenal of ideas, emotions and tools almost all equally well. Just in case cursory fans know him more for his social media antics, foreboding album opener “Not The Only One” sees Gates cutting off untrustworthy women and street partners, switching mid-bar between his brawny, visual rhymes and distressed singing to send the message. Singles “2 Phones” and “Really Really” succeed with sticky, melodic choruses dedicated to hustling, flossing and sincerity, and “Ask for More” celebrates the fruits of success. “Jam,” the only song with any features, gives a taste of the several cuts aimed at women. Ty Dolla $ign, Trey Songz and Jamie Foxx all team up on the radio-ready hook, while Gates seduces with comically lewd rhymes that may need an alternative version to ever succeed on the airwaves. The songs cover predictable topics, but he succeeds with his varied skill set and distinctive drawl.

The production is also consistent, despite a crew of lesser known names with only one name appearing more than once. The album manages to flow with a cohesive trap sound. “La Familia” and “The Truth” are appropriately haunting, while songs like “Pride” coyly integrate trap elements without sacrificing Gates’ sentimentality.

The 17 tracks and 63 minutes of Islah flow surprisingly well; even though there’s room to cut the fat, it doesn’t drag on the way many albums with that many songs do. Kevin Gates will probably remain in the headlines for the rest of 2016, but it’s clear that he’ll make the most of the spotlight as one of rap’s more promising young voices.