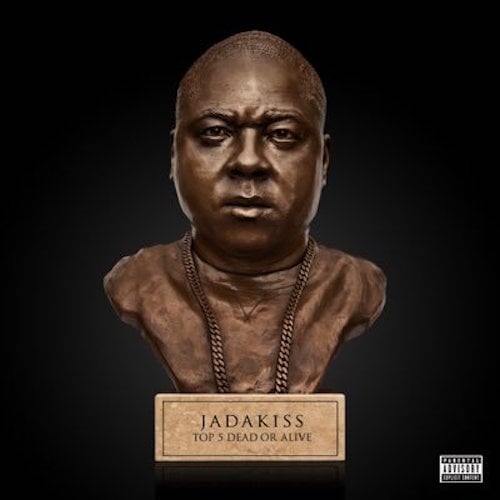 Hip Hop is quite possibly the only genre of music today putting such a heavy weight on being number one. Sure, country music and EDM artists all strive to be the best at what they do but nothing quite like rap music. As fans, it is almost impossible to have a serious conversation about Hip Hop without a “who is the greatest” debate popping up. Maybe it’s the inherent competitiveness of the game or just our love for discussion, but either way you slice it, rankings can mean a lot.

Billboard’s recent list of the ‘10 Greatest Rappers of All Time’ ruffled a few feathers primarily because many “shoe-ins” were left off. Rappers like Tupac and Kanye West were amongst some of the names fans and critics alike thought should have been included – but with the release his new album Top 5 Dead or Alive, it is Jadakiss that declares his spot among the greats.

Ironically dropping right in the heat of the Billboard debate, Jadakiss’ newest album is essentially his way affirming his top tier rank in hip-hop. Top 5 Dead or Alive is Jadakiss’ fourth solo album, which is relatively surprising based on how influential he has been since his Ruff Ryders and The L.O.X. days. In most cases, it usually takes a rapper of his calibre seven or eight solo albums to really gain long-term notoriety. The difference with Jadakiss is that quality always trumps quantity.

His last album was released over six years ago, but Kiss remained to keep his relevancy alive. 2012’s Consignment mixtape plus a few singles in 2013 was enough to keep Jadakiss coming back to your playlists. However, the momentum for this album didn’t really get going until his Friday Morning Massacre freestyles. Teaming up with DJ Envy, Kiss hopped on a few notable instrumentals and ensured to absolute lyrical blackout. It was the perfect fuel for the fire that is T5DOA.

In a lot of ways, T5DOA picks right where he left off. For starters, the album starts with Jadakiss taking a short few minutes to talk to the listener and let them know what time it is. In 2009, it was announcing his return. This time around, he reminds us that he should be in your top five; if he isn’t already.

After the first initial play through, this album definitely translates as Jadakiss’ most celebratory to date. The beats are more grandiose, less gutter horror story and more hustler’s celebration. The whole theme plays out like his very own victory lap.

After boastful intro “First 48”, Jadakiss rolls into the Diddy assisted “You Don’t Eat”. That track along with various others on the album showcase Kiss rapping over untraditional beats. At first listen, it’s easy to question why Kiss would be experimenting with different beats and instrumentation on an album that is supposed to declare his consistency but in reality, Kiss is just keeping up with the times. Take the song “You Can See” with Future as a prime example. The song sounds like a trap anthem that just missed the cut for DS2. Snares, drums, claps and even adlibs all give it a very “modern trap” sound. Regardless, Kiss brings the bars and proceeds to mould his raspy, haunting New York flow to an instrumental created for an autotune croon.

This versatility is proven even further on songs like “Man in the Mirror”, “So High” and “One More Mile to Go.” All of which feature Jadakiss switching up flows, rapping over unlikely beats and most of all collaborating with some unusual suspects. Of course Styles P, Sheek Louch and Swizz Beatz all play a role on the album but the real standout guest appearances come from the newer generation – including Wiz Khalifa, Future and Nipsey Hussle. The interesting part too is that these collaborators really bring their sound out of Jadakiss. “Ain’t Nothin New” really feels like a Ne-Yo and Nipsey lead song. Jadakiss didn’t just ask for a chorus and verse to be emailed over, it really feels like all three artists started the song from scratch with Ne-Yo and Nipsey leading the charge. Don’t get it twisted,  Jadakiss doesn’t take a back seat by any means. His lyrics, delivery and classic cadences aren’t sacrificed for a second.

That unwavering skill may actually be the best part about this album – or any of his albums for that matter. Jadakiss is such a technically skilled rapper that even his lightest bars can make some of today’s best go back and reconsider their own verses.  Whether it’s knockout punchlines, double time or even bar-for-bar back and forth with Styles, Jadakiss reminds us that really rapping is still a way to win in today’s game.

The album, and Jadakiss’ current place in Hip Hop, can really be summed up by two lines from the intro. “Most of them is lovin’ me some of them hatin’ me/Say he’s underrated dependin’ on whose ratin’ me” couldn’t ring more true. He truly is your favorite rapper’s favorite rapper. Everything from modern adaptability to classic rhyme skills ensure Jadakiss’ placement amongst rap’s elite. Even though he campaigns for himself throughout the album, at this point, Jadakiss isn’t concerned about winning over those adolescent fans from the suburbs and sit on Tumblr all day. Time and time again, Jadakiss has proven to the right people that he is deserving of a spot in your top 5 dead or alive.