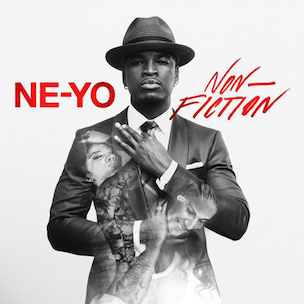 Ten years ago, Ne-Yo crooned his way into the hearts and minds of rhythm and blues fans worldwide. His being “‘So Sick’ of love songs” resonated with two million-plus fans and kicked off a career spanning six albums, ten top-ten singles and nearly ten million albums sold worldwide. Thus, with latest album Non-Fiction, Ne-Yo has nothing really left to prove as a dominant mainstream performer, and decided to create an album that’s more engendered to telling stories with Pop-friendly and stream-ready singles than pushing massive numbers of albums.

Dark but filled with enough magical moments of production genius to keep you, Ne-Yo kicks off his sixth album with the following disclaimer: “The story you ’bout to hear is complete fiction. It is however made up of a group of stories, true stories about real people. Thus creating real characters going through real things. Thus making the story itself real, true and a real story, a true story, is non-fiction.”

The tale being told is an honest pastiche of a relationship gone awry, of a rich man and not-so-similarly rich groupie (named “Tammy Vanity”), and how they deal with the excitement of love, the allure of lust and the realization that a meaningful relationship between them is not meant to be. In having such a long and well-defined mainstream career, the paints and canvases that Ne-Yo uses here are well established. In being so defined, they allow the superstar to deliver goods that may not be incredibly groundbreaking, but are pleasing to the ear.

Ne-Yo is at his best when he’s a nice young man. However, the crooner is now over the age of 30 so we can certainly expect that this good guy has a demon or two that he now wants to explore in song form. The artist born Shaffer Smith is now more willing to embrace a role as a bottle-popping panty dropper in song may seem intriguing, but again, when you’ve mastered the ability to make the commonplace appear amazing – as Ne-Yo has throughout his career – even an album throwaway like acoustic threesome ode “Story Time” (sample lyrics: “She said, “What if I said I want to bring in another guy?” / What!?, I just gave her a look like “you done lost your damn mind” / She said, “Oh, okay so another girl is fine / But when I mention another dude you’re lookin’ like you wanna punch me in the eye”) when delivered with Ne-Yo’s calming, dulcet tones and earnest songwriting could be mistaken for a retail commercial jingle.

The real takeaway from this album though is that Rap and R&B are now interchangeable in pop/top-40, so if an artist making those sounds, the need to embrace both sides of the spectrum is necessary to be be both relevant and commercially successful. Ne-Yo’s R&B competition is singer/rapper hybrid Trey Songz. At the start of their careers, Ne-Yo sold 3.5 times the number of albums as Songz. Now, Songz is doubling Ne-Yo’s sales, so we go from material like 2006’ “Sexy Love” and 2008’ “She Got Her Own” to 2015’ magnificently executed “Andre 3000 flow” rap-ballad “She Said I’m Hood Tho,” where Ne-Yo and his frequent songwriting partner Shea Taylor take a slyly syncopated soul track and between the “thot” jokes and Ne-Yo admitting that a lot of his fans don’t like his dance and pop-driven moves, crafts one of the albums best overall performances.

When an album features as diverse a production lineup as Stargate, Dr. Luke, David Guetta, Corparal and more, the finished product could feasibly be absolutely terrible, in the worst of disjointed and ear-grating ways. However, it’s a testament to Ne-Yo’s demonstrated Pop chart-topping excellence in finding his unique voice and style in all of the sounds that allows this album to excel. Again, while not setting the world on fire, it nestles its way warmly into your heart, soul and dancing feet. Ne-Yo’s one of those first ballot hall of fame-type performers that no matter how much musical expectations shift, his level of execution impressively remains the same.