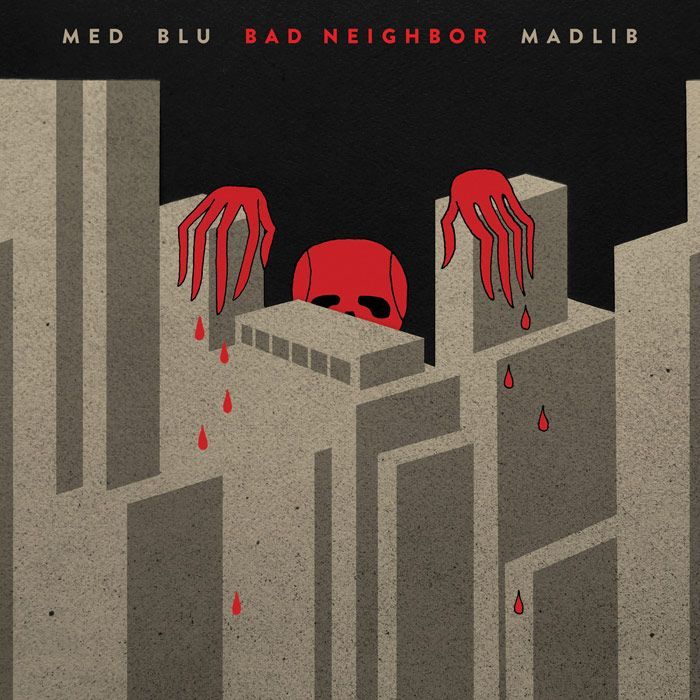 With Drake and Future as sitting President and Vice President of Hip Hop (you get to decide who gets to be the bigwig) and strippers recounting their wildest stories on Twitter, it’s easy to miss out on new music from the likes of MED, Blu, or Madlib. But if you missed an album with all of them starring as the leads, you’d also be missing out on beats and bars Drake and Future could appreciate. So hit pause for an hour on Dirty Sprite 2 and What A Time To Be Alive, and let Bad Neighbor rock for a bit.

With the name of the title drawing inspiration from Madvillain (Blu’s idea), Bad Neighbor weighs in at 15 tracks and is packed with guest features on almost every one. But they never feel like they’re overbearing and taking away from what the three core artists already laid down. A majority of the features are singers who complement the vibe of the beat Madlib’s concocted. Blu and MED reign in their flows to match Madlib‘s gait for the most part, but their individual tendencies leaked through at times. On “Get Money,” it’s actually the guest feature, Frank Nitt who rides the beat the nicest and then it’s Madlib’s brother Oh No on “Streets” who pulls a Wire-esque perspective flip and spits a vivid verse about a different kind of daily fight living in a rough neighborhood. DOOM appears out of the fog with a short life update on the already released “Knock Knock.” He hasn’t seen scandal yet but he can still “torture the lyrics, mics, and crucifix.” But that’s not to say that MED and Blu can’t impress on the mic anymore. They go from deservedly cocky (“Peroxide”: “The Payback/Go getter rants/Now we pick the finest cotton off the racks…”), to cleverly nostalgic (“Drive In”: “I met a redbone/I got the Akinyele from my acapella…”), to culturally relevant (“Knock Knock”: “Trying to touchdown in the friend zone…”).

Madlib doesn’t contribute a verse in the primary use of the term. He does get to flex his production game on “Mad Neighbor” by having a minute to himself to construct and deconstruct a beat from samples curated by Parliament Funkadelic as if they’d spearheaded a space exploration mission for 20 years, traveling to far away planets and collecting native sound bites. Then for the rest of the album, you have the mad Beat Konducta at the helm, leaving you with outros of new melodies that could’ve developed into full songs. His ability on “Streets” to marry some deep drums over an 80’s power pop sample helps envision a party where old school Hip Hop heads drinking 40’s can get down with a married couple roller skating with neon sweatbands on. Respected as one of the greatest samplers, Madlib sneaks in a beat like “Knock Knock” that begs the question: how much is his doing and how much is striking gold in a random vinyl store? Overall, after the first few listens of the album, you really can’t put Madlib under one genre. We dare you to try.

There isn’t necessarily a point to be made about Bad Neighbor. There isn’t a single storyline with complicated themes being told throughout, copious amounts of drugs and/or money aren’t being exchanged, nor is Pitbull on any of the tracks. But if you consider the particular goals each artist sets out to accomplish–Madlib with sonic compositions that will have everyone scratching their heads on their origins, Blu with the West Coast lean in his muffled step, and MED with his boom bap flow–they did an impressive job without stepping on anyone’s toes, having lines and beats worth remembering, and bringing a few friends and family along for the ride.