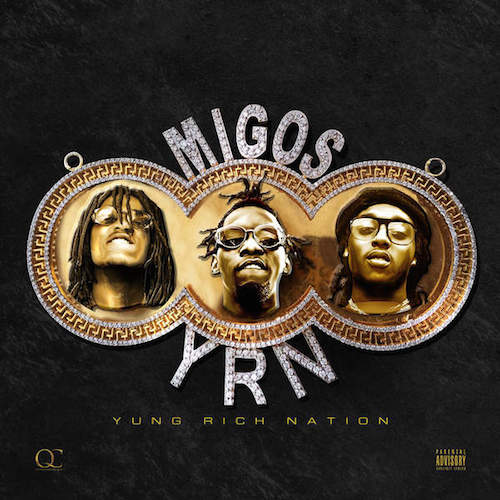 Who would’ve ever thought one collective from Atlanta’s North Side would hilariously find themselves compared to The Beatles?

Before Drake jumped on the “Versace” remix, Migos’ following around Atlanta as Yung Rich Niggas were firmly attached to the area’s newly evolved Hip Hop scene. Since then, Quavo, Offset and Takeoff, along with ATLiens from Young Thug to ilovemakonnen have essentially helped turn the area into a creative mecca for pop music in general. Doesn’t hurt that they’ve garnered two large singles through “Handsome and Wealthy” and “Fight Night” along with the largely debated “Migos flow” utilized by more than a few emcees. Add their clever ability to maneuver through contemporary pop, it’s easy to understand how much Migos has cemented themselves as the hybrid of character raps and creative ingenuity. This pretty much describes the feel of their Quality Control/300 Entertainment debut Yung Rich Nation. Past several highly successful mixtapes including Rich Nigga Timeline and No Label II, those who have followed the intricate trajectory of Migos knows exactly what to expect. For those listeners, they exceed those expectation more so than none. However, those who purposefully haven’t invested themselves in Migos’ specific take on Atlanta Trap conventions probably won’t be swayed much.

Off the bat, there’s a level of vulnerability and introspection that was only teased on previous projects normally overshadowed by stylistic flexing. YRN opener “Memories” has all three humorously remembering their past before the fame with just enough depth that feels human. That same theme extends to “Migos Origins” where they aspire past their current status within the game. Migos’ mechanics as a trio have adequately expanded as Quavo’s wild cadence sounds more controlled, Offset’s wordplay enjoys some moments of complexity and the way Takeoff flips back and forth between delivery styles is honed in a lot more. Thankfully, the catchy hooks are still intact thanks to lead singles “One Time” and “Pipe It Up.” This time though, addictive hooks aren’t necessarily at the forefront.

For the rest of YRN, Migos transitions between the trap, club, women and their newly expanded outlook with varied results. The best moments are always the most unexpected and features two fantastic takes on early 90s West Coast gangsta rap fused with contemporary Atlanta. “Highway 85” starts with Quavo proclaiming “We go N.W.A. nigga” before finding inspiration by Eazy E’s simplified yet aggression flow. One listen, it’s fairly obvious producer Honorable C.N.O.T.E.(who handles a little under half of YRN’s production) has been finding some wise inspiration. The second vintage West Coast/Atlanta hybrid comes in “Gangsta Rap” which is codeine slowed with a Bay Area groove. Within YRN’s nearly hour timespan, tracks such as “Street N**ga Sacrifice” and “Playa Playa” feel like bloated filler that should have been scrapped. Within the disjointed track sequencing are two disappointing guest features. “Just for Tonight” featuring Chris Brown is just as uninspired as Breezy’s dialed-in hook while Young Thug’s addition to “Cocaina” sounds like a mismatched collage of noises. Features are fairly difficult when the personality of Migos are so sonically attractive. Hopefully, the celebratory “Spray The Champagne” becomes a new championship theme song.

YRN more than proves that Migos has rightfully evolved past their mixtape days. The three blood relatives are more adventurous and creatively expansive than ever. However, a little bloat within the tracklist and below average guest spots hurt the album but, gratefully doesn’t hamper the overall entertaining listening experience.