Troy Ave - Major Without A Deal 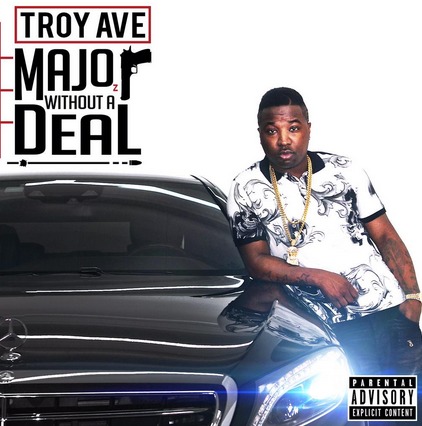 Few concepts are more bandied and belabored than the uphill battle to restore New York’s place as the arbiter of Hip Hop quality. The challenges of breaking out and standing apart from the internet’s talent abyss isn’t enough, the five borough’s rising stars are also met with the pressure to fill the shoes of legends. There has been no one set approach or sound with each modern contender occupying their own lane: A$AP Mob pays homage to their Southern and Midwestern forefathers, Action Bronson is a big ball of unexpected eclectic fun, and Joey Bada$$ is the voice of the youth.  Perhaps the Big Apple’s most peculiar widespread spectacle has been the overbearing Troy Ave who is all too willing to market himself as the town’s heir apparent.

The latest hopeful to fulfill the often replicated ‘hood pharmacist turned Rap superstar’ archetype, Troy Ave’s brash charisma may not be enough to sustain an extended career. Having come far thanks to public fervor for street cred (evidenced by last year’s Bobby Shmurda craze,) his outwardly projected vanity is betrayed by the final output of Major Without A Deal.  Determined to make good on his increasingly futile agenda of keeping the East coast dominant, here Troy has thrown a hail mary in hopes of swaying tastemakers, gatekeepers and hesitant onlookers. Aiming to show a just a dash of motivational flair, the otherwise catchy “Doo Doo” functioned as an updated spin on Jay Z’s “Hard Knock Life,” but, it ultimately landed on deaf ears due to his off-putting personality. This was preceded by the buzz builder “Fake Butt Busta,” a fully sung ode to the trend of artificial posterior enhancements, an early certain sign of diminished inspiration.

On Major Without A Deal, the unstated theme places Troy Ave on a pedestal as one to rally behind with cameos from an all-star cast of former greats perhaps desperately holding on to waning relevance. Fat Joe contributes next to nothing of any worth on “I’m Bout It,” and while Cam’ron works well enough on “Quarter Million,” his appearance is far from memorable. The album’s most odd collaboration comes by way of 50 Cent’s appearance on “Bang Bang”, as the former linchpin once issued the backhanded compliment “I hear a lot of me in Troy Ave.” “Do Me No Favors” features Jadakiss & Fabolous, both further past their prime than most will freely admit. Whether these acts truly believe in Troy’s potential or seeking a bandwagon to piggyback is anyone’s guess. Regardless,  it stands to reason that co-signing him represents a unified stance for their presently lacking hometown.

The bulk of Major Without A Deal is Troy falling victim to his own hype and hubris, making it impossible to consider him a true torchbearer for this generation. Twitter savant and frequent Troy Ave collaborator Chase N. Cashe recently compared his trajectory to Jeezy’s fabled viral breakthrough, a biased parallel that holds little weight despite the ATL veteran appearing on the remix to “All About The Money.” Having made outlandish attention commanding statements including “Kendrick Lamar is just a weirdo rapper” on the title track to 2013’s most potent New York City, he’s lost the charm glow that made him one to watch not even a year ago.

Troy Ave’s self-confidence skews towards myopic arrogance, as high points like “Young King” are practically ruined by intentionally off-key vocal melodies and “Real Nigga” comes off as Maybach Music Group karaoke. While he maintains a firm grasp on rapping about the intricacies of his criminal past, Major Without A Deal does little to relay his message as one that is absolutely essential. At this rate, Troy is destined to be a niche artist lacking any true star power. Given his limited vision, he mostly speaks to anyone hung up on the notion that Brooklyn’s vacant throne needs an immediate placeholder.