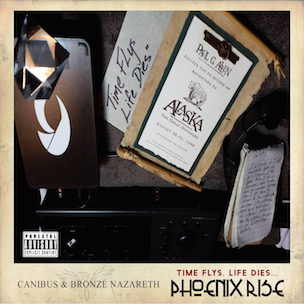 It’s hard to believe that Canibus has been in the Hip Hop game for nearly the last 20 years. Ever since his controversial introduction as a rookie on the definitive posse cut “4,3,2,1” and subsequent beef with LL Cool J, there actually have been few that can rival the emcee on the mic in terms of intricate verses and destructively deep lyrical wordplay. But the thorn in the side of the Jamaican-born emcee throughout his career has seemed to be how his production choices haven’t matched up with his unbridled talent for rhyme. Hoping to change all that, Canibus teamed up with Grand Rapids, Michigan producer and Wu-Tang affiliate Bronze Nazareth for his latest incursion with Time Flys, Life Dies…Phoenix Rise. And with the music here, Canibus may have very well exorcised those past hindrances

The most unsuspecting but possibly greatest example of Canibus getting himself over the hump in this union with Bronze Nazareth comes in the form of “Mr. Montana…Thank You”, an introspective, bare bones track where Canibus seems to unload a ton of honesty about the Hip Hop game and the world in general, with lines like “…the fate of humanity is tailor made/ We stuck between a rock and a razor blade…” It’s simultaneously vintage Canibus, but a track that ironically gives the emcee new life with Bronze’s pounding, plodding, East coast inspired drums and loops. That new life continues to seep throughout the makeup of “Infinity Detox”, where Canibus sears with passion like he hasn’t in a long time. It’s a welcomed, re-energized emcee that spits those gritty, gravelly bars over the somewhat-upbeat-but-just-dark-enough beat from Bronze. And the way the second verse is weaved together in a patchwork, staccato way is curious, but works.

Throughout Time Flys, Canibus seems to dig deep within the recesses of his past to give listeners a more introspective view of his travels, his career ups and downs and more. This is especially true on the 8-plus minute “Canibus Autobiography Pt. 01,” where he reveals stories about run-ins with Mike Tyson, Nas and the likes of Dr. Ruth, Bill Gates and Angela Bassett. And, as in the past, when he opens himself up to fans wanting to know more of his past story, Canibus seems to shine even brighter on the mic. While on “Give Me Not Control,” gears are switched yet again when the worship of mass media by the general public becomes the target as Canibus and Bronze Nazareth again form a solid bond through solid boom bap production and mind-expanding lyrics.

As he’s done in the past, Canibus seems to rely throughout Time Flys on themes of self-reflection, the search for truth, and trying to educate while entertaining. And while he has always been an emcee that can easily manipulate words, expressions, thoughts and phrases into some of the most improbable lines Hip Hop fans have heard, there have been a number of times where it either comes of as heavy handed, or it just doesn’t seem to align with the music and beats that he’s gone with. That’s not the case here. Nearly every piece of production that Bronze Nazareth has chosen for this album seems almost to fit distinctly with Canibus’ rhyme style, delivery and attitude. For example, there’s the eeriness in the organ on “Formula Won” that makes for a commanding, compelling listen. And the fervent soulfulness of “Igloo Music” is surprising in its mellowness, but doesn’t deter Canibus from being as passionate as on any track from the album.

Ultimately, Time Flys won’t be considered a groundbreaking album. Canibus is doing exactly what he is supposed to do here: being an impassioned, no-holds-barred emcee with a lot on his mind. It’s just that this time, he has a partner in crime in Bronze Nazareth that has seemed to awaken more in the emcee than either of them probably expected. Time Flys, Life Dies… Phoenix Rise might not quite be an album that allows Canibus to arise from the ashes like the Phoenix he wants to be, but it at least allows him to begin to dust himself off and get his name back in the conversation as one of the most puzzling lyricists of his generation.