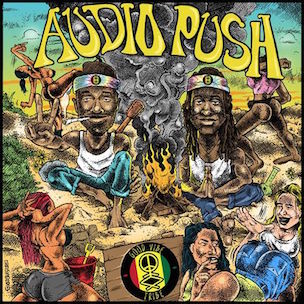 The West-Coast duo Audio Push jumped into stardom in 2009 when they taught the world how to jerk. Their move became the newest dance craze to saturate the party scene. But it didn’t take long for the Inland Empire, California duo to revamp their style and croon the Internet with their R&B inspired “Up N Down.” Oktane and Price reinvented themselves, once again, when Hit-Boy scooped them up to join his Hits Since ’87 record label and the group left their dance moves behind, moving forward with what they have coined “The Good Vibe Tribe.”

The Good Vibe Tribe is both their mixtape title and the name of their collective. Released on stoner holiday 4/20, the tribe extends past the two group members and includes anyone who values loud music and loud packs. Within the thematic release, Oktane, Price, friends and wanderers gather around a bonfire, freestyle and engage in social commentary about a vast inclusion of topics, stretching from the throwback Enyce clothing brand to the 1915 racist propaganda film “Birth of a Nation.” The crackling of the bonfire flames, the waves crashing onto the shore and the faint sound of classic records such as Erykah Badu’s “Other Side of the Game,” Lil Wayne’s “Hustler Muzik” and Nelly’s “Country Grammar” backdrop their roundtable discussions, cyphers and beer pong face-offs.

Aside from bonding over paper planes and thoughtful conversation, Audio Push attempts to blur the musical distinctions between energy and bars and does so successfully for the most part. As the duo finesses over Hit-Boy’s looming production, which gains menacing momentum, the lyrics don’t suffer despite the drive of the tempo on “Reppin’.” And with several mentions throughout the project of the rap game losing its storytelling, Audio Push sends a compelling message that good vibes and lyricism don’t have to be mutually exclusive. Monstrous bass can partner with cunning bars, and should.

The duo generally prides themselves on spreading positivity, but that sensibility is put to the test on “Take Care.” Price interweaves his many musical influences, who hail mostly from the 90s “Golden Era,” into descriptive rhymes which inform his artistry now. But his homage toward Method Man and Bun B is followed by his candid feelings about his rap peers, including a not so subtle shot at Young Thug. “The way I feel about the game, I’d offend a few / but so what? This my shit / and it’s a lot I can’t vibe with / lyrics you can’t understand, voices all high-pitched / so called rapping, man that shit need ‘a die quick.”

The loose project motif allows plenty of room for versatility, while still maintaining a cohesive sound. Oktane and Price rap of an everlasting romance for “Mary Jane (SixtyOneImpala),”West Coast pride and respect is exuded and commanded on “Reppin’,” and light flute melodies accompany the uplifting “Peace Pipes.” Vince Staples and Casey Veggies assist Audio Push on “Mind-Trap” for the exploration of self-contradiction, popular culture and what it means to be black in America. Oktane begins his verse with composure, but his delivery increases in brutality as his bars become more penetrating. “They call us niggers / What if I say I don’t take offense to it? / What if I told you I don’t cringe to it? / What if I looked whoever said it in his face and said / Your kids love my shit, iPod’s proof / I’m that nigga, check your kids music.” Hit-Boy creates a gloomy and enigmatic production that feels parallel to the complex questions the four emcees propose.

SmokeyGotBeatz crafts a dynamic soundscape for “Jumpin,’” that TDE’s Isaiah Rashad contrasts with a foggy rendition of Outkast’s “Skew It On The Bar-B.” “From old school players to new school fools” is executed in an exaggerated hoarse timbre, while Audio Push keeps it vibrant with their verses and adlibs. Only the sounds of police sirens and what seems like an infinite party, but not before a few “good vibes, stay alive!” chants are sung in unison and solidarity.

For Audio Push, good vibes include incredible production and imaginative lyricism and they are accomplished without compromising, either. Although a few tracks on the mixtape don’t offer much innovation outside of a catchy hook, mostly, the duo intelligently brings the energy and storytelling, raising the bar without lowering the bass.