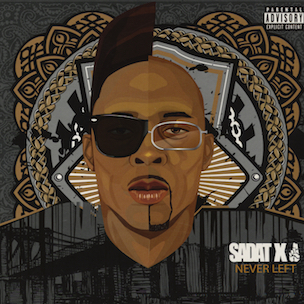 Being one-fourth of one of Hip Hop’s most celebrated post-Golden era squadrons is an accolade that only a sliver of emcees can muster. Sadat X happens to be one of those emcees. As one of the co-founding members of Brand Nubian, not to mention his affiliations with New York contemporaries Diamond D, Lord Finesse, The Beatnuts and the D.I.T.C. crew, ‘X has been able to carve out a respectable solo career for himself without wallowing in the shadows of the Brand Nu’ crew. An album two years in the making, Never Left is a sterling confirmation of just why he’s been able to remain such a revered voice in New York Hip Hop.

The main arc/central theme of Never Left finds Sadat X reveling in being contemplative, reflecting on his two-plus decades in Hip Hop while sharing hard-earned wisdom and enjoying the invigorated moment that is this album. Punctuated throughout with introspective and personable interludes of Sadat’s memories of his time in the game as well as stories where he harkens back to personal moments with Hip Hop legends the likes of Jay Z, Nas, 2Pac and Notorious B.I.G.

The tone of the music in Never Left captures this sentiment with potent results. The album is energized and jolting. Starting out with the standard but effective New York love letter “We In New York,” Sadat rides Fokis’ production throughout Never Left like a true vet’, knowing exactly where to throw each voice inflection, when to give his everything, and when and where to be more solemn as on the jilted, should-have-known-better anthem “Live & Ya Learn.”

Elsewhere, Sadat’s voice and flow are as boisterous, rowdy and animated as ever, like on the brazen title track where he serves New York emcees that abandoned the city a heavy dose of humility and warns them to stay away.  Never an emcee known to be overly complex or that will cause eyes to widen or bottom jaws to drop to the floor with his stories or wordplay, Sadat X instead relies on the frankness and earnest candor found in his songs to get his point across and, for lack of a better term, to provide edu-tain-ment.

And from the stellar positivity of “Beautiful Day” to the smooth, subtly celebratory vibe of “Sliddin,” Sadat has done better than he has on past his solo projects to construct songs that envelope the listener and appeal to a wider array of ears. Granted, he’s a 100 percent home grown New York emcee to the fullest, but when its probable to effortlessly vibe out to the hot and sticky dancehall-driven waviness of “Put It On Me,” it’s easy to spot that Sadat has learned a few tricks of the trade and applied them to this body of work.

The main element that seems to push Never Left out of the realm of average and into one of being nearly stellar is the production. Fokis lays an unflinching foundation of heavy yet crispy, clean drums coupled with warmly nostalgic instruments and samples (ex: Nas’ voice from “One Love” is featured on “What Up Kid”), allowing for Sadat X to let loose on song topics ranging from breaking the bro code on “Ya Best Friends Girl” to the struggle and virtues of the independent artist grind on “I Know This Game” and do what he’s done best for years: be as unhinged, as endearing and as New York as possible. Yet the main drawback is that Sadat has never been known to be the most challenging or inventive lyricist. This causes him to at times get outshone by his guests, like Stryfe’s impeccable verse on “Armageddon” that seemingly leaves the veteran emcee in the dust.

But when all is said and done, Never Left is blue-collar and honest, mature and musing, and is a New York City album through and through, while showing some flashes of diversity yet remaining sharply distinct and true to its core. With over 20 years of pristine, well-deserved stock in the game, it seems that’s exactly what Sadat X was gunning for.