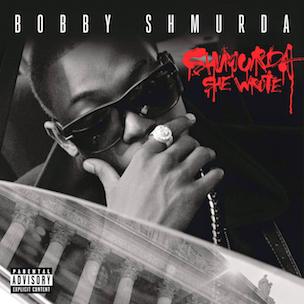 The rules of Hip Hop are always subject to change, and heading into 2015 lyrical skill continues to take somewhat of a back seat. With the capacity to appear larger than life factoring more heavily towards success, stardom has become predicated on creating compelling scenes that capture a moment. Brooklyn’s GS9 crew has pulled this feat off in spades with the breakout success of Bobby Shmurda. A household name almost out of thin air, his visibility through YouTube, Vine, Tumblr and other arenas of online exposure indicate the youth’s ability to shape and mold culture, making him the only sensible option for closing this year’s BET Hip Hop Awards ceremony. Striking while the iron is hot (no pun intended), Epic Records attempts to capitalize on Bobby’s deafening buzz, bold presence and star power with Shmurda She Wrote.

Happily trading his block for bright lights, Bobby Shmurda has basked in the endless discussion and criticism surrounding his name for the past two seasons. The ongoing debate stems from his swift rise making him both an instant meme and a (perhaps momentary) hitmaker, with spectators torn as to whether or not he’s a flash in the pan gimmick. This summer’s video for “Computers” featured Bobby’s trademark spastic live motion accompanied by simplistic, catchy lines like “I’m sliding over cars when I shoot / I think that I’m Tom Cruise,” leaving viewers intrigued at the prospect of him flourishing on a debut. With its formal arrival, Shmurda She Wrote is a brief glimpse into the life of a riled up adolescent trying to make the most of his big moment while not far removed from the hazardous trappings that made him a star, six seconds at a time.

The EP opens with “World Wide Nigga,” where Bobby drops a monologue explaining how he’s gone from petty skirmishes to a global brand extending as far as Dubai. The song shows the pride he places in street credibility, the same attribute that brought him prosperity on the ubiquitous and lazily titled “Hot Nigga.” Without much regard for song structure, the now infamous long verse salutes comrades who tote pistols for protection amidst the drug trade and calls for other friends (and Shmurda’s father) to be released from behind bars. By luck and happenstance, Lloyd Banks’ “Jackpot” (where the production for “Hot Nigga” was originally used) fell flat, giving an opportunity for Bobby’s ingenious flow and shmoney dance to dominate this past summer.

Bobby Shmurda’s primary challenge and goal has been getting lightning to strike twice. Skeptics were bemused by his quick rise while supporters were eager for another smash single, with curiosities indulged by the hopeful follow-up “Bobby Bitch.” Despite the amusing footwork found in its three minute short film and the catchy use of repetition in his verses, the young shooter has met a comparably lukewarm reception on this second try. Speeding up the same rhyme pattern on “Living Life,” his lack of experimentation falls short but his partner in crime Rowdy Rebel contributes something of interest with awkward pronunciations giving vocal reminders of Chief Keef (a likely inspiration to anyone coming of age in the era of viral sensations).

Shmurda She Wrote winds down with “Wipe The Case Away,” likely based on Bobby Shmurda’s true to life blunders and issues within the legal system including his June arrest for weapon possession. Here he makes his most ill-advised creative decisions, feigning innocence while crooning through auto-tune and seeking empathy with the grammatical faux pas, “We was in the courthouse, oftenly.” The product of East Flatbush is coasting comfortably with his finger on the pulse of what moves people for now, and Bobby’s theatrics have breathed life into New York Hip Hop, but while his minimalist approach has gone appreciated, his long-term sustainability is subject to questioning. Likened by hesitant commentators to the short lived spectacle that was Trinidad James’ big moment, Bobby’s music seeks to eliminate challenges from opposing crews and police, but the biggest threat he may potentially face is the backlash from a lack of further artistic development.