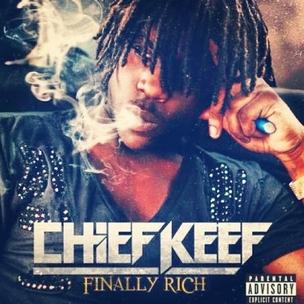 Perhaps 2012’s greatest viral success story, Chief Keef’s rambunctious antics captured through video and social media have made him a troublemaker and an unassuming branding expert simultaneously. The source of heated debate, his captivating and unpredictable persona has practically guaranteed each concurrent online appearance to be a multimedia event, as fans and naysayers alike gather to watch and discuss a possible train wreck in action. Lending question as to whether he’s more savvy than his immediate impression, Finally Rich is Chief Keef’s long awaited debut aiming to capitalize on the overnight hoopla that spectators find puzzling, disturbing and compelling at once.

As the breakout star of Chicago’s self-contained drill scene, Chief Keef makes art without fabrication detailing the activities that led him to house arrest at age 16. A chance at redemption a year after being written off as a lost cause, Finally Rich does little to help Keef’s case as he basks in unapologetic ignorance at every measure. The rousing chants of established hits “I Don’t Like” and “Love Sosa” as well as album cut “Hallelujah,” the flagrant usage of Auto-Tune and the overall disregard for clear enunciation on “Kay Kay” and “No Tomorrow” all demonstrate the Windy City adolescent’s reckless lack of concern for decorum and convention.

Never a stranger to controversy, “Hate Being Sober” is Chief Keef’s catchy but morally questionable substance abuse anthem featuring an out of place 50 Cent and Wiz Khalifa, who only manages to be a slight asset. Though French Montana fits well on “Diamonds,” his presence distracts from the youngster’s appeal with similarly dull results stemming from rivals Young Jeezy & Rick Ross on “Understand Me” and an updated “3Hunna” respectively. These flaws along with the senseless experimental delivery of “Laughin’ To The Bank” water down an otherwise exciting listen for anyone willing to humor Keef’s madness. Assisted by frequent production collaborator Young Chop, Chief Keef has maximized the internet’s potential and designed a lane for himself as Hip Hop’s present poster child for disenfranchised youth.

A fair assessment can see his dangerous character as a product of his environment rather than simple glorification of wrongdoing, with Finally Rich creating entertainment out of hopelessness. Having taken off in a short time span while growing into adulthood, immaturity is certainly a big part of his shtick, but most importantly Keef’s rise puts a mirror up to devastating socioeconomic conditions all too often swept under the rug.