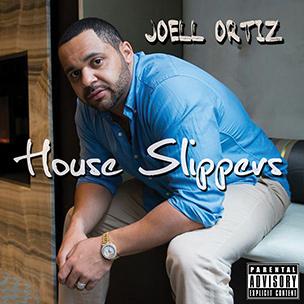 It’s hard to find a pocket of Hip Hop that Joell Ortiz isn’t palatable in. The Brooklyn native supplies bars of complicated rhyme patterns to those still in the market for them, and he has the charisma to comfortably chart a single or at least drop a song-stealing 16 on someone else’s (the release of title track “House Slippers” came in tandem with an unofficial remix of “Pills N Potions”). But what makes Ortiz particularly likable is his narrative’s transparency. Even casual listeners remember that his son has asthma, while the more dedicated followers have been privy to his volatile shuffle between Aftermath, Koch/E1 and (as a member of Slaughterhouse) Shady Records. House Slippers has a palpable premise in earning closure and finding a comfort zone after years of being at the mercy of the industry.

For the most part, the project delivers. Ortiz’s third full-length maintains dense rhyme schemes and candid stories from start to finish, and aside from a few failed experiments at the bigger records Ortiz has been hinting at for months, it doesn’t stray particularly far from previous material. But Ortiz’s crutch of rapping about how good he is at rapping consumes several tracks on House Slippers, and his obsession with channeling Golden Era Hip Hop is often paired with an unfitting beat. When the Slaughterhouse emcee commits to enjoying himself, it shows; when Hip Hop and New York are excessively sentimentalized, House Slippers feels heavy handed.

The former luckily outweighs the latter. “Get Down” finds Ortiz channeling Cool J lyrics and Jheri curls, smirking over scratches and a stripped down drum loop. “Dream On” strives to return to “The Fat Boys and Heavy D in ‘86 spittin’ free in the park,” and backed by sparse Jazz and a Premier-esque hook of samples, it makes a convincing case. And the gravitas of “Q&A” has him lacing Timbs and cracking knuckles while addressing a series of questions. “Let me tell y’all why I hit the tread / Wasn’t to lose weight and get this bread / Nah homie, you been mislead / Last year I shot a fair one with my nigga Fred / And damn near dropped dead, I should’ve won but I got whipped instead / I ain’t like that so I stopped that liquor to the head / Dropped the Newports / Copped new shorts and watched my figure shred,” he explains. Unfortunately, the intricate rhyme schemes Ortiz adopts aren’t always used to tell stories or offer anecdotes. The Slaughterhouse posse cut “Brothers Keeper” is memorable when Ortiz details split allegiances during a Joe Budden beef, or when Royce Da 5’9 imagines talking about alcoholism with his uncle in heaven. But the overwrought strings and operatic wails essentially sets up for five and a half minutes of rapping about how loyal the members of Slaughterhouse are to each other, complete with three separate Eminem name checks.

The project’s obvious crossover efforts are awkwardly spliced between the stronger tracks, hindering consistency with a “one for me, one for them” structure. The doleful stream of consciousness heard on the introductory “House Slippers” ends with a middle finger to the radio and a salute to Radio Raheem. The plush R&B hook of “Cold World” immediately follows it. “Dream On” comes before “Music Saved My Life,” a maudlin lead single with good intentions but predictable execution (at one point, Ortiz calls music his stepdad and says that he was raised by Stevie Wonder). An excellent sequence of “Say Yes,” “Better Than” and “Phone” ends with a cloying hook of “My honey bun, my sugar pie” on “Candy.” Both the production and thematic focus of House Slippers is unpredictable from track to track, and while that’s a testament to Ortiz’s versatility in the middle of the project, it makes for some awkward reaches in the beginning and end.

Still, House Slippers is a strong listen, and Joell Ortiz’s redemption story is easy enough to follow without falling victim to platitude. The radio efforts and the excessive Biggie Smalls interpolations create two hindering extremes, but the majority of the tracks that fall somewhere in the between are worth at least a few rotations.