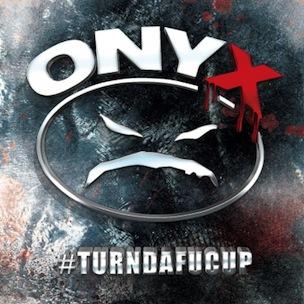 Sticky Fingaz and Fredro Starr continue to build in 2014. After dropping #Wakedafucup in March they moved quickly to release #Turndafucup, a follow-up just four months later. With Sonny Seeza and the late Big DS no longer part of the group, Onyx has asserted themselves as a duo in 2014.

Per the review, the ending to #Wakedafucup is a bit abrupt. But this isn’t necessarily a bad thing. Where #Wakedafucup is among many things a critique of current mainstream Hip Hop trends, #Turndafucup is ambitious in different ways. It too has many layers both lyrically and musically, but most importantly it is the second installment of a two-part series.

#Wakedafucup flirted with Horrorcore rhyming, but #Turndafucup is more streetwise. And while rapping under the street umbrella, Sticky and Fredro skillfully switch the contents around; from Gangsta to Hardcore to just straight bar-for-bar rhyming. Their rhymes are also less concerned with the Hip Hop landscape than on #Wakedafucup, and instead are geared more towards their traditional tendencies. Fredro in particular really stands out. On “We Get Live” he raps, “I’m sinister / Hennessey with the minister / Born sinner / Forgive me for my sins then I finish ya / I send niggas to a guiding light / Use the left side of my brain ‘cause my mind ain’t right.” His rhythm, his writing skills and his creativity are all on display here. Sticky Fingaz certainly has his moments too—stealing the show on “It’s On Now”—but Fredro sounds extra motivated throughout.

A major theme of #Turndafucup is its instrumental emphasis. In keeping with the theme of “Turn The Fuck Up,” Trap and up-tempo EDM beats are utilized a handful of times to capture a party vibe. Classic styles aside, the EDM attempts aren’t without their shortcomings. “Frontline,” for instance, bangs as hard as any Trap beat, which is uncharacteristic of Onyx. The chorus is overwhelmingly “turnt” for lack of a better word, and it’s hard to play through. Even the presence of Raekwon on the track, an all-star, doesn’t alleviate the poor beat. Similarly, on “Cuzo,” only Fredro Raps, while the bulk of the track is a display of Trap beat acrobatics. But the experimentation on the album is noticeable, and not necessarily in a good way. The EDM angle ultimately works against #Turndafucup as whole.

#Turndafucup is concise, and a more diverse collection of music than its predecessor. It also contains two bonus tracks: re-recordings of classic Onyx hits “Slam” and “Last Dayz.” On #Wakedafucup, Onyx established an ability to make their brand of music, while seamlessly contemporizing it. A continuation of the artistry from #Wakedafucup is established on #Turndafucup, but its attempts at current up-tempo production trends lack as a whole. Lyrically, the album is generally on point. The production however, seems misplaced at times.