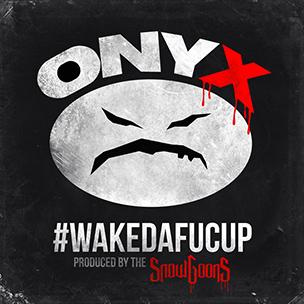 “Hip Hop started on the block / I fell asleep at the wheel, the shit crashed into Pop.” This couplet from the title track of Wakedafucup is a thematic manifestation from rapper Sticky Fingaz and the group Onyx. Since 1993, they have dropped eight albums. The group has witnessed Hip Hop’s Golden Era heyday and the transition into the 21st Century. They’ve watched rappers come and go, rise and fall. Their unique perspective as a group is what enables them to be both observers and critics of Hip Hop in 2014.

Time and again on Wakedafucup, Sticky Fingaz and Fredro Starr remind listeners that they are ambassadors of a more rugged brand of Hip Hop—demanding that rappers and listeners alike “wake the fuck up,” from this current Pop inclination.

Their forte is blunt, streetwise lyrics. On “Buc Bac,” Fredro Starr raps, “The kickback from the pistol will break ya wrists / Then I’ll put you six-feet in the ground and take a piss / I’m disrespectful, I know, but fuck you / I know a couple niggas that’ll kill you for a buck or two.” Lyrics like these are exemplary of their intertwining Gangsta Rap and Horrorcore content that is commonplace on Wakedafucup. This style is also further reinforced on “We Don’t Fuckin Care,” which features A$AP Ferg and Sean Price—who is in prime form. For all of the guest features on Wakedafucup, the enlisting of Price was perhaps the smartest decision. His style is almost perfectly suited for the overall tone of the album. It would behoove his fans to hear it.

Production is handled by the German team Snowgoons. While it maintains a consistent tonal theme throughout, the impact and intricacy provided on top-notch beats like “One 4 Da Team” and “Dirty Cops” isn’t always there, which ultimately takes away from the album as a whole. On “Boom,” the scratches at the end of the track are dope, but equally frustrating because there could have been more of it utilized elsewhere on the album. Granted the Snowgoons were being particular with the beat making, but it falls short of their work on their debut compilation German Lugers.

Besides the production, the other major takeaway from Wakedafucup is the sequencing of the tracks. The first half is slow and at times monotonous, but the second half is a tighter, more cohesive offering. Starting with “The Tunnel,” featuring Cormega and Papoose, Onyx fleshes out the rest of the album with stimulating grittiness. The last track, “Turndafucup” ends abruptly, making for an anticlimactic ending that is both a good and bad: bad because it leaves the listener wanting more, but good because this might be exactly what Onyx wanted; a stoked hunger for more.

Overall Wakedafucup is multi-faceted. It has street records (“Whut Whut”), Horrorcore verses and inclinations (“Wakedafucup”), first person narratives (“Hustlin Hour”), storytelling (“Trust No Bitch”) and conscious Rap (“One 4 Da Team”). There is a lot going on, but it’s stays digestible as a whole, and never loses sight of itself. It’s also a welcome album during a time in which comparable street records are few and far between. Veterans like U-God of the Wu-Tang Clan and Diddy have said Hip Hop is getting too soft, so to see Onyx drop a record that’s truer to its roots than most similar Rap music these days is both welcome and refreshing.