Sage The Gemini - Remember Me 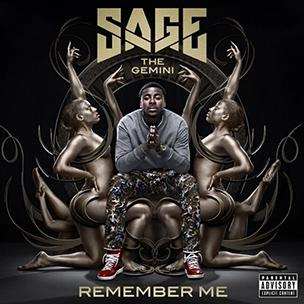 Much like his West Coast contemporary Ty Dolla $ign, Fairfield, California emcee Sage The Gemini walks an exceedingly fine line between the ratchet and the melodious in his music. And seemingly oozing and flush with influences from both Northern California and New Orleans bounce Hip Hop, Sage’s debut Remember Me—though overly tedious and tame at times—is an airy, snappy, minimalist and infectious body of work.

With a majority of the production coming from Sage himself and P-Lo of The Invasion, Remember Me stays wholly consistent pretty much from start to finish. From the opening title track’s rubbery synths and Sage’s head nodding hook, “Fuck the cool crowd, bitch I’m a nerd / This is not high school, the cool crowd is absurd…” we know exactly what we’re getting: succinct and fleeting but buoyantly entertaining party music that’s strategically repetitive. It’s hand clap and finger snap-heavy and doesn’t over-intellectualize or contain much unnecessary filler. And at times breezy and spacey or thumping and rattling on the album’s two radio hits “Red Nose” and “Gas Pedal” respectively, Sage’s ear for production and hypnotizing flow trade off well on each other.

Elsewhere, “College Drop” sounds like a joint straight from the playbook of Cash Money Records, pre-Lil Wayne’s “greatest rapper alive” claims of supremacy. The track is both hand clap heavy and thick with pounding, bass. “Put Me On” makes for Sage’s semi-autobiographical track without being bitter or angry—aimed squarely at naysayers, fake friends and snakes that said he’d never amount to anything. And “Nothing To Me,” the unofficial album banger, is reminiscent of old school E-40 in its aesthetic: party-centric and clever yet unforgiving in its knocking vibrations.

And Sage is also good at smoothing out the proceedings. Combining elements of the aforementioned Ty Dolla $ign and to a certain extent Drake. Every now and then, he incorporates billowing mounds of R&B into his music, giving it a more melodic, delicate quality. “Down On Your Luck” and “Mad At Me” are great examples of that, both are very minimal while still providing two stand out moments on the album. While “Deserts of Mirages” is surprisingly emotional and poignant, even with its ratchet Hip Hop-life problems subject matter.

All well and good, but the style and sizzle throughout Remember Me only take it so far. Much of Sage’s material and subject matter is indistinguishable from lots of radio Rap these days. The strong consistency on the album also unfortunately gives way to a lack diversity, imagination and risk-taking. And though there are spurts of competent, astute wordplay, Sage ultimately rides with too much style over substance, which hampers the album and, at least in some spots, making it somewhat forgettable.

But what Sage The Gemini lacks in lyricism and engaging subject matter, he makes up for in magnetism and harmonic finesse. Remember Me’s faults definitely hold it back, but it’s still largely likeable and satisfying when it comes to simply being festive West Coast party Hip Hop.