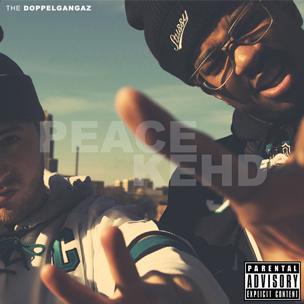 In a time where “shock value” can be sometimes be looked upon as a justifiable way of attaining success, it’s easy to find yourself inclined to salute artists who resort to sideshow antics. There is also the mediocre flipped side of that coin, as some artists can lead themselves onto a career path of desperation as their creative ability begins to produce fresh and entertaining subject matter at a scarce rate. All this taken into account, if the outrageous lyrics can be combined with consistent solid production efforts, an astounding depth in vocabulary and even a hint of artistic growth, the self-imposed outcast persona can most definitely prosper. This is the case on Peace Kehd, the fourth studio album by the upstate New York Rap duo, The Doppelgangaz, as the cloaked dyad yet again manage to impress while proudly rhyming about their dissipation and impropriety, with some allusion to their career’s triumph also present.

Reaping the benefits off their strong, global, cult-like following, the two emcees, Matter Ov Fact and EP, have been able to add discreet new themes to their bars. Most of these added treats concern the abnormal duo’s success, but they still maintain the need to write their shameless grimy lyrics. It was these lyrics that either thrilled or disgusted listeners on their previous projects, giving the screw-face while heads moved serenely along to the self-assembled laid-back production. Most did this in a manner that could be done almost anywhere and anytime with the exception of techno-ridden venues, which the twosome probably experienced in abundance among their strong European following. The LP itself is very similar to their successful 2013 project, Hark!, with the minor but effective additional subject matter and the eradication of that subtle static that was present throughout most of the album. However well-written the “Doppel Gospel” sermons on this album are, the constant sharing of their off-kilter nature and extremely varied encounters with the opposite sex, does leave room for the danger of making it sound like each song is the continuation of the last.

The familiar content doesn’t in any way prevent the listener from enjoying what they are hearing. This is evident three tracks in on “Sh*t Rock,” where most people won’t be able to do much but get amused as both rappers detail their erectile dysfunction problems. Matter Ov Fact explains his suffering when he comically raps with assonance, “Yo how am I supposed to be performing under these conditions / I been hit up the doctor, yo I’ve been filled out prescriptions / I took them joints so long I started developing a resistance / It’s like playing discus with a tearing in your meniscus.” The many instrumental interludes present throughout the album do nothing but further display the dark eeriness, that comical bars like those present on “Sh*t Rock,” can’t prevent from being an attachment to the group’s name. This is very obvious when part of the “Let The Sunshine In” nursery rhyme is sampled and played out at the end of “Ungodly,” the only track that has a feature—all be it a forgettable one from the group’s friend and collaborator Big Josh. If anything, it shows the competence of the duo as their dependence on others is nearly non-existent.

The crew’s cultural knowledge has clearly been enhanced from the heights that they have reached as they now dine on abalone and the best pesto, puttanesca and asiago Cheese, while they sip on their aqua poanna or “Bahama Mamas” in their Sahalie. Matter Ov Fact gets the message across nicely that The Doppelgangaz have lived a colorful life, with or without their Rap careers when he raps, “I know some Beckys that be quoting ‘Pac / I know some black Trekkies who be quoting Spock.” If listeners can get over the fact that some of the material may be repetitive when it comes to the obscene raps and sometimes meaningless stories about women, as the pair are adding new concepts at a slow pace to their work, they should be able to appreciate the expansive lyrical depth that is shown by both emcees. Additionally, the quality production is something listeners have come to expect from The Doppelgangaz based on their previous projects. Overall the creative capability of both Matter Ov Fact and EP makes Peace Khed another enjoyable listen to add to their discography.